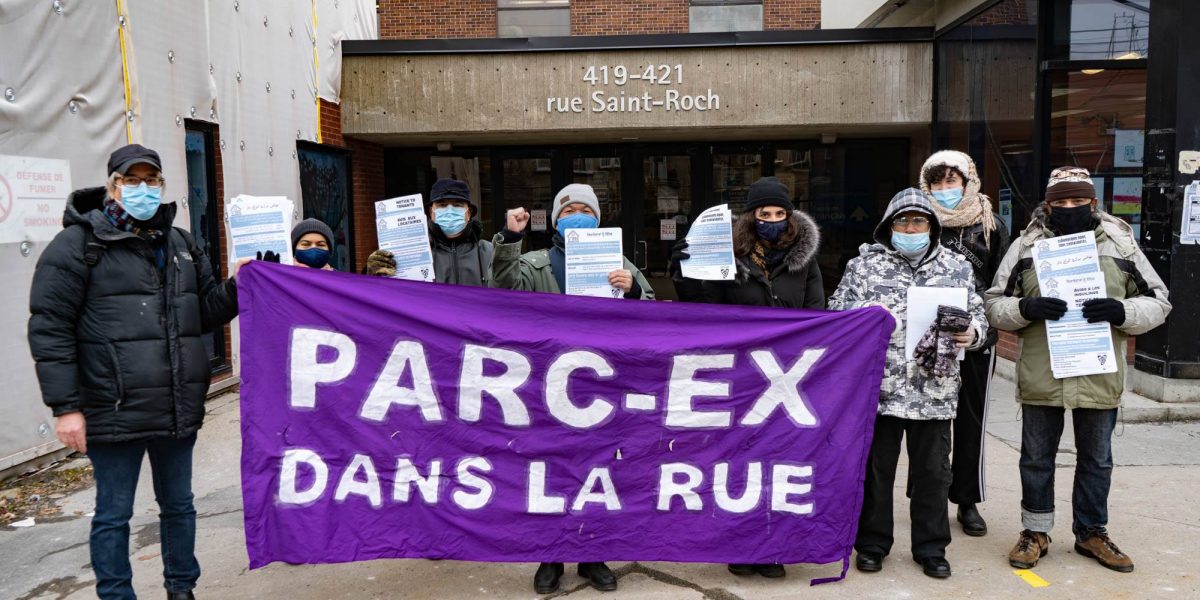 Before the COVID-19 pandemic, Montreal’s real estate market was already changing. Many new condo developments were being built, the vacancy rate plummeted, and communities of colour were sounding the alarm about the gentrification of their neighbourhoods.

In 2020, the on-island average rental price increased by 4.2% from the previous year, and the city’s homeless population doubled to approximately 6000, resulting in shelters quickly reaching maximum capacity. The death of Raphael Napa André, a beloved community member who froze to death after being asked to leave a shelter, shined a spotlight on the lack of resources available to the city’s homeless population, especially during the pandemic.

Accessing affordable housing is increasingly difficult in Montreal. In 2019, the city’s vacancy rate was a mere 1.5%, a 15-year-low. The pandemic resulted in the vacancy rate increasing to 2.7% in 2020. Though the availability of apartments has increased, rent continues to climb as well, increasing by 4.2% over the last year. That is well over the recommendations of the Tribunal Administratif du Logement (TAL), the administrative tribunal providing information and recourse measures for lessors and lessees in Quebec.

According to the Canada Mortgage and Housing Corporation (CMHC), the persistence of high rental prices is likely due to how strong rental growth has been during the pandemic. The CMHC suspects landlords might be less willing to offer lower rents, even if they are left with vacant units. While the overall apartment vacancies are up to 2.7%, the vacancy rate is a mere 1.4% for apartments listed between $625 and $899 a month, leaving few housing options for those with low incomes.

Quebec has some of the strongest tenant protections in the country. Many provincial governments have been lauded for putting in place rent controls during the pandemic, something Quebec had in place in pre-pandemic times. Tenants are not expected to put down a deposit, and can refuse rent increases and any other lease modifications their landlords propose while automatically being renewed on their lease. Landlords are obligated to disclose the lowest paid rent on a unit within the last 12 months when signing over to a new lessee, and tenants can turn to the TAL if they feel their landlord is failing to uphold their responsibilities.

These protections have helped keep Montreal’s rent relatively affordable in comparison to other Canadian cities for years. However, investments from large developers, increasing gentrification, the curtailing of rental regulations by landlords, and a lack of oversight and follow-up from TAL, has resulted in the displacement of many low-income and residents of colour from their boroughs, and has pushed others onto the streets.

Home to six universities, over 20 CEGEPs, and more than 200,000 post-secondary students, Montreal has the highest proportion of post-secondary students of any major city on the continent. Many students are often inexperienced with standard rent prices, and don’t plan on staying in the city long-term, making them favourites amongst landlords who want to turn a profit. The Plateau was hit first by rising rental costs, due to its proximity to McGill University, but many other neighbourhoods have followed suit, including one of the country’s poorest neighbourhoods, Parc-Ex.

In the fall of 2019, the Université de Montréal (UdeM) opened its new MIL campus, located in a railway yard on the border of Parc-Ex. 61% of Parc-Ex residents were born outside of Canada, and 43% live below the poverty line. Initially, the university had promised 1300 units of student housing, but they have since decided to sell the units as condos. Advocates for the Parc-Ex community want UdeM to provide non-profit student housing in order to ease the strain of gentrification on longer-term residents of Parc-Ex. Advocates argue that universities are also, in their own right, major real estate developers, and thus have obligations to provide affordable housing. However, UdeM has made it clear that they have no such plan.

In December, the Comité Logement de la Petite-Patrie, a tenants’ rights advocacy organization for a quickly gentrifying borough in Montreal, published an investigative report on renoviction and repossession cases. Landlords are legally allowed to repossess and evict their tenants if they are doing major renovations, or if the landlord or one of their family members plans to reside in the unit. Of the 363 cases investigated, the organization found that 85% were fraudulent. The organization also found that most of the tenants affected were low income, and most of the landlords were not large developers, but rather owners of one building.

TAL is receiving five times more demands of evictions for major renovations than two years ago, and the demands of repossession have increased by 65%. A spokesperson for the Comité Logement de la Petite-Patrie believes that landlords are abusing these allowances to evict their tenants and illegally double or triple the rent on their units. Tenants have also reported being harassed and intimidated into giving up their dwellings by their landlords.

Response from the city and province

The city and the provincial government have acknowledged that there is a problem, and have responded with a piecemeal approach. In 2019, the provincial government put forward increased restrictions on short-term rentals like Airbnb, requiring hosts to obtain a registration number on primary residences, and register with the body overseeing the tourism industry, Corporation de l’industrie touristique du Québec, if they wish to rent out a secondary or tertiary residence. The province also invested $24M into funding for TAL to increase the processing of cases. The federal government is providing $56.8 million in federal funding to the City of Montreal to support the completion of 263 housing units.

In an effort to curb the exodus of low and middle income families to the suburbs, the city unveiled a plan in 2019 set to start in January of 2021 requiring developers to set aside 20% each of social, affordable and family housing to any new build, or pay the city compensation in land or cash. In November of last year, the City reviewed this requirement to give developers more flexibility. The affordable housing requirement now only applies to two zones slated for development in St-Laurent and Nuns’ Island and the city will allow developers to build higher-density projects if they include more affordable units.

Housing as a basic right

Regulations and bylaws negotiated with developers and corporations do not begin to address the scale of the housing crisis in Montreal, particularly when existing tenant protections are being easily curtailed by landlords. With no measure of accountability for landlords, little recourse for tenants, and an underfunded rental board increasingly siding with property owners, the City needs to decide who has the right to live in Montreal.

To ensure Montreal doesn’t lose more of its long-time community members to developers, the moratorium on evictions must be reinstated and landlords and developers who have unlawfully evicted tenants to turn a profit must be met with hefty fines and licensing consequences. We need accountability and investment in community-oriented housing solutions to mitigate further harm from developers who have impacted our neighbourhoods, including post-secondary institutions. Lastly, we need to envision ways of taking profit out of housing. By centring long-term Montrealers, families, immigrants, and tenants, we need to prioritize non-profit, cooperative, and social housing to meet the housing needs of all of our community members.