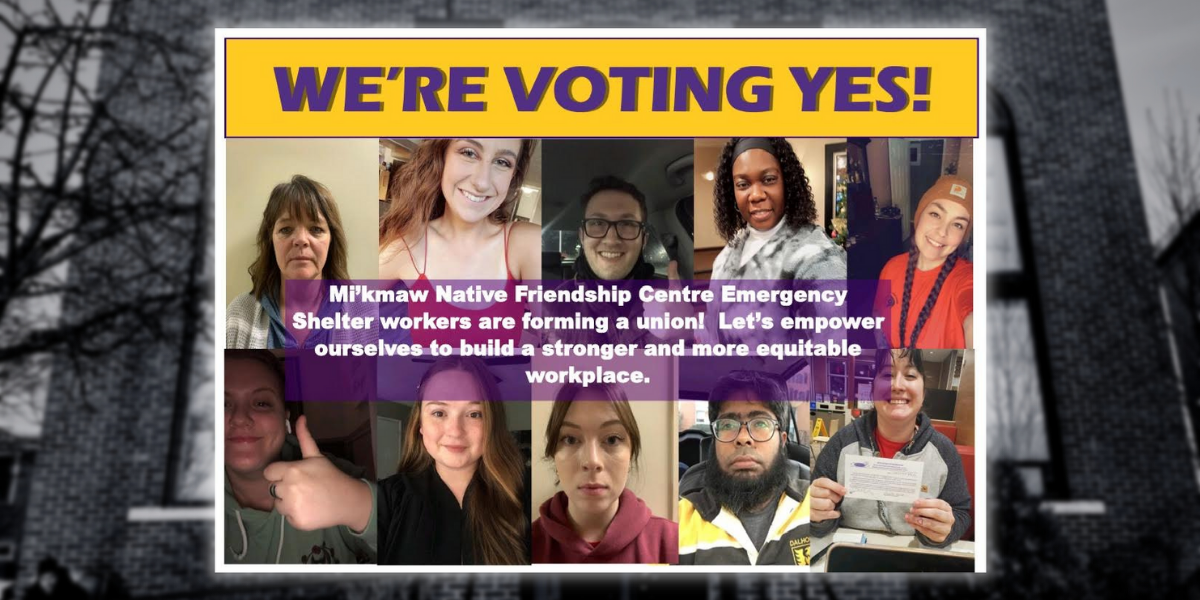 The Mi’kmaw Native Friendship Centre (MNFC) homeless shelter in Halifax will be closing its doors at the end of December according to Pam Glode Desrochers, Executive Director of the MNFC, in an internal memo given to staff on Monday December 13.

Glode Desrochers announced the decision to shelter staff after they submitted a union application to the Nova Scotia Labour Board earlier that morning.

“We are shocked and deeply saddened by our employer’s decision to close our shelter in the midst of the worst housing crisis this city has ever experienced,” said Catherine Hubbard, a shelter case manager.

The MNFC shelter opened its doors in January 2021, and now has 40 beds with priority given to Indigenous people. The people sleeping in those 40 beds will soon be back out on the street with nowhere to go, as all other shelters in the city are full.

As of December 14, there are 455 people known to be homeless in the Halifax Regional Municipality, 96 of whom are known to be Indigenous. The MNFC shelter is the only shelter in the region that gives priority to Indigenous people experiencing homelessness.

“This decision removes 40 beds from an already overburdened shelter system where people experiencing homelessness are consistently turned away to sleep in the streets and parks,” said Denise Smith, another shelter case manager.

In a recent media statement, Glode Desrochers uses a variety of talking points to justify closing the shelter – from insecure funding, to the state of the building itself, lack of cultural support, and lack of use by Indigenous community members. The reasons Glode Desrochers provides are misguiding, and largely come down to mistakes on the part of management.

“If management has issues with the way the shelter is managed, then they need to do their job and fix their mistakes,” says Hubbard. “It doesn’t help anyone for management to just give up and walk away from 40 homeless people and 20 shelter workers in the middle of winter.”

Hubbard adds that staff have lacked guidance and support all along. “If Glode Desrochers was actually present at the shelter and saw what was going on, she would know that these issues can be solved while continuing to provide support here.”

Knowing that homeless shelters in the HRM are consistently full every night, Glode Desrochers may claim that the MNFC is arranging hotel stays for all current shelter residents. Arranging hotel stays is known for being significantly more expensive than operating a shelter for the same number of people. Above the cost of each hotel room, the hotel locations would need to be staffed by shelter workers in order for the hotel stays to be safe and successful.

In the internal memo, Glode Desrochers goes on to describe how management plans to manage the shelter differently, and that they “will be taking January into February to do this work,” implying that management intends to only close the shelter temporarily.

According to the shelter staff, the closure of the shelter at 2029 North Park Street and the efforts of the staff to unionize are not coincidental.

“It is deeply disturbing that this decision was announced to us within an hour of us filing an application at the labour board to unionize,” said Rosalie Hyslop, another shelter case manager.

“The shelter team of the MNFC’s emergency shelter had been discussing unionizing in recent months in order to protect the well-being of both staff and clients,” said Hyslop, “and it is impossible for us to accept that this hasty decision to eliminate our jobs and close the shelter is not related to our decision to form a union.”

MNFC shelter staff are continuing to fight for decent jobs in the shelter sector and for the people they support. They join a growing number of others in the city who have joined the Service Employees International Union (SEIU) Local 2. SEIU members have recently ratified union contracts with Shelter Nova Scotia and Out of the Cold Community Association.

“We love our clients, our work at the shelter, and the community we serve,” said Brent Cosgrove, another shelter case manager. “Keeping this shelter open, specifically during winter months, is of the utmost importance to us. The staff and clients of this shelter deserve better and we are calling for urgent support.”

MNFC shelter workers and supporters will be rallying outside the site of the shelter at 2029 North Park Street on Friday at 12:00 p.m. to demand that government and MNFC management act now to not allow the shelter to close.