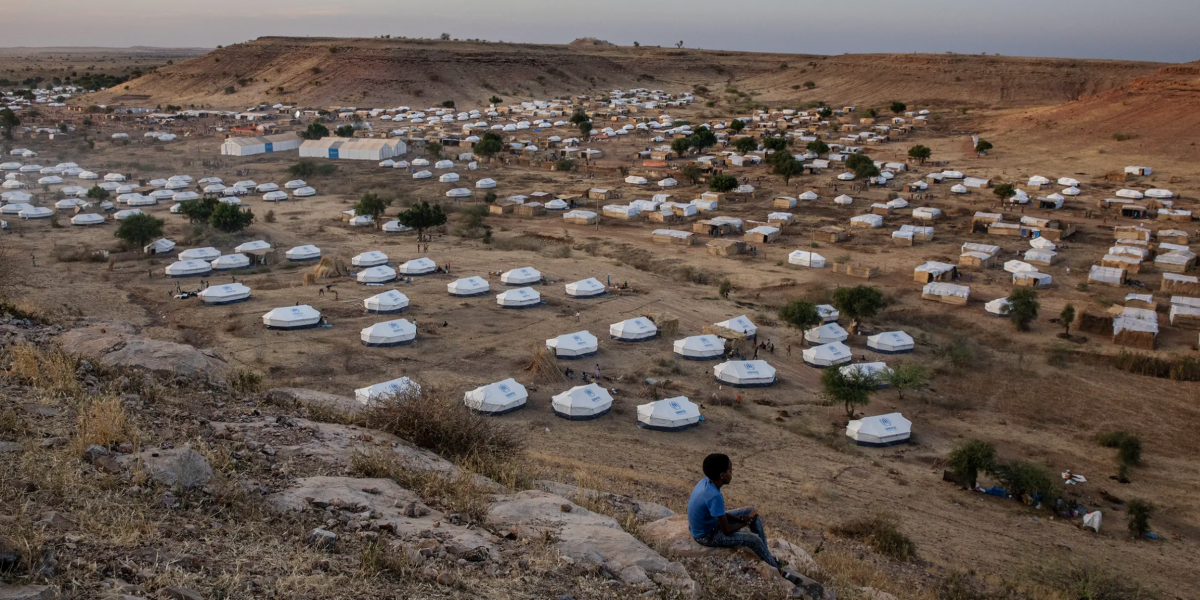 Canadian Prime Minister Justin Trudeau has branded himself and his foreign policy as environmentally conscious and feminist. But one of the biggest recipients of Canadian development assistance is the government of Ethiopia, which has launched a brutal war on the Tigrayan people—a war which has specifically targeted women, and from which Canadian mining companies are profiting.

Who are the Tigrayan people?

Tigray is the northernmost regional state in Ethiopia, home to an estimated 7 million people, representing about 6% of the country’s population. The region shares international borders with Eritrea to the north and Sudan to the west. Tigray is known as the cradle of Ethiopian civilization because it was home to the ancient kingdoms of D’mt (c. 980 BC–c. 400 BC) and Axum (c. 80 BC to c. 960 AD). In its heyday, Axum was one of the most powerful kingdoms in the world and is where Ethiopia’s unique written language (Ge’ez) originated.

Tigrinya-speaking Tigrayan people make up over 95% of the population, with the remaining composed of two minority groups, the Irob and Kunama, who have their own unique social and cultural traditions. The majority of Tigrayans are Orthodox Christians, with a minority of Muslim, Catholics and Protestants. Historic monuments, the most famous of which is the Obelisk of Axum, and uniquely designed churches, carved from cliff faces or built into pre-existing caves, dot the Tigrayan landscape. Al-Nejashi Mosque, among the holiest sites in Islam, where companions of Prophet Muhammad fleeing persecution in Mecca found refuge, is also located in Tigray.

But Tigray’s long history of political organization and self-governance has been perceived as a threat by successive regimes in Ethiopia’s modern history. As such, the regimes of Menelik II (1889-1913), Haile Selassie (1930-1974), and Derg (1974-1991) sought to subjugate and disempower the people of Tigray. They attempted to do this through the fragmentation and occupation of Tigrayan territories and oppressive policies aimed at the political, economic, and historical disenfranchisement of the Tigrayan people, the most egregious of which is weaponized starvation. Most notably, the 1983-1985 famine in Ethiopia, which killed nearly 1.2 million people, devastated the region of Tigray, which was cut off from aid by the military dictatorship (Derg) that ruled Ethiopia at the time. In a bid to break the Tigrayan resistance and subjugate the people, the military dictatorship kept humanitarian workers and humanitarian aid out of the region, killing hundreds of thousands of people.

More than three decades later, Tigrayans are once again being subjected to man-made famine and weaponized starvation by a federal government intent on subjugating them.

The war on Tigray: massacres, gender-based violence, and starvation

The war on Tigray is the culmination of escalating hostilities against the region and its population since Abiy came to power in 2018. Abiy himself repeatedly scapegoated Tigrayan leaders and people for all of the country’s challenges, stoking ethnic divides. Routine demonization of Tigrayans — referring to them as “daytime hyenas” and “weeds”, reminiscent of rhetoric weaponized against Jewish people and the Tutsis in Rwanda — has been rampant in the Ethiopian political discourse since Abiy’s rise to power. This demonization and scapegoating had led to a significant rise in ethnically motivated killings and displacement of Tigrayans even before November 2020.

Following the November 4 declaration, Abiy Ahmed’s government has not only mobilized the Ethiopian National Defense Force (ENDF) and militias from the Amhara region (another region in the Ethiopian federation) but has also invited troops from neighbouring Eritrea to attack Tigray. Abiy’s brutal war on Tigray has been characterized by unparalleled viciousness and destruction. There have been hundreds of documented massacres of civilians across Tigray, in which thousands have been killed. Graphic videos depicting members of the ENDF killing and throwing the bodies of Tigrayans over cliffs or setting bodies on fire have emerged.

As a result of the war, more than 60,000 Tigrayans have fled to neighbouring Sudan and more than 2 million have been internally displaced. Internally displaced people (IDPs) have had to seek shelter in abandoned buildings, schools, and makeshift camps and have very limited access to food, medicine, and other essential necessities. The health, education, and economic infrastructure of the region has been completely decimated by the Ethiopian, Eritrean, and Amhara forces, who looted, vandalized, and destroyed facilities, leaving more than 80% of Tigray’s hospitals incapacitated.

An atrocious aspect of the war on Tigray has been the weaponization of sexual and gender-based violence (SGBV), as reported by numerous international aid organizations. An overwhelming number of reports have extensively documented the brutality of the weaponized SGBV committed by Ethiopian, Eritrean and Amhara forces—including rape, gang-rape, sexual slavery, and sexual mutilation. Several reports have noted the viciousness of these attacks, with humanitarian workers describing them as the worst they have ever seen anywhere in the world. People have been publicly forced to rape members of their own families, upon the threat of death. Young girls and women have been held in sexual slavery, gang raped by soldiers over a period of days or even weeks. Women and girls have had foreign objects like nails, bags, rocks inserted into their genitalia and told that “a Tigrayan womb should never give birth.”

Weaponized SGBV is intended to terrorize, subjugate and sever the familial and community ties that bind Tigrayan society. Furthermore, in a patrilineal society like Ethiopia, where a child’s ethnic identity is determined by their father’s ethnicity, weaponized, industrial-scale rape is intended to eliminate the ethnic group, by ensuring that the children born from these assaults will not be seen as Tigrayan. The destruction of health centers and the blockade of medical supplies to the region have further exacerbated the SGBV crisis, preventing thousands of survivors from accessing the support they desperately need.

In addition to all of these atrocities, Tigray is currently facing the worst famine in the world, with an estimated 6.8 million people in need of emergency food aid and 400,000 in catastrophic levels of hunger. When Eritrean, Ethiopian, and Amhara forces occupied Tigray in November 2020, they unleashed a systematic campaign of destruction—burning and destroying crops, looting and killing livestock, and destroying essential farming supplies. Additionally, they prohibited Tigrayan farmers from ploughing their land, destroying the food source of farmers who make up more than 80% of the region’s population. As a result of these actions, 11 months into the war, there is a catastrophic famine in Tigray. According to the United Nations Office for Coordination of Humanitarian Affairs (UNOCHA), ​​”An estimated 1.4 million children under the age of five and pregnant and lactating women (PLW) need preventative intervention and malnutrition treatment.”In the midst of the worst humanitarian catastrophe in the world, the aid donated by international agencies has been blocked from entering the region by the Abiy administration. With hundreds of thousands in famine and millions more on the brink, hundreds, if not thousands are dying daily because of the Ethiopian government’s de facto aid blockade.

In recognition of the severity of the crisis, the United States government has taken stringent measures, threatening to impose a range of punitive sanctions in the coming weeks. Similarly, in October 2021, the European Union (EU) parliament passed a resolution calling for sanctions and an arms embargo on Ethiopia in an effort to bring an end to the humanitarian catastrophe. Several other states have also begun to take concrete measures to facilitate a cessation of hostilities. However, to date, the Government of Canada has not even denounced the ongoing war crimes and crimes against humanity that Ethiopia and its allies are committing in Tigray. Moreover, it has continued to provide financial assistance to the Ethiopian government, which stands credibly accused of acts of genocide.

Why has Canada not joined the United States and other allies in taking concrete steps to help stop the suffering and death of countless innocent people whose only crime is being ethnic Tigrayans? Why has Canada taken a back seat on this issue? Could it be to protect its economic interests?

In recent months, several reports have emerged that point to the link between Canadian mining interests in Tigray and the Canadian government’s tepid response to the humanitarian catastrophe. Reporting by Fitsum Areguy for The Breach showed that Canada has spent $15 million dollars to support mining in Ethiopia. Since 2016 alone, $12 million of Canada’s international aid has been spent on Ethiopia’s mining sector. The report additionally notes that the stated objectives of Canadian foreign assistance—including environmental protection, gender equity, and corporate responsibility have not been met—suggesting that mining interests trump other considerations in Canada’s engagement with the Ethiopian government.

The Breach report, as well as additional reporting by the Globe and Mail’s Geoffrey York, show that Canadian gold-mining companies see events in Tigray as an opportunity for riches. While millions of Tigrayans are cut off from aid, communications, and transportation and are fighting to survive, Canadian mining companies have been lobbying the Ethiopian government to get mining licenses in the region. It is now confirmed that at least six Canada-based companies hold mining licenses in Tigray. Furthermore, in June, the Canadian ambassador to Ethiopia, Stéphane Jobin, shared on Twitter news of his meeting with the mining minister of Ethiopia to discuss the potential for further investment in the mining sector.

Canada’s response to the humanitarian catastrophe in Tigray appears to be guided by one overwhelming concern: protect Canadian mining interests, even if this comes at the expense of millions of lives. That the Canadian government has repeatedly stated its support for the Ethiopian government, and is unwilling to use all the tools at its disposal to ensure that the deadly siege and blockade on Tigray are lifted, prove that mining revenue is Canada’s sole concern. Despite stating that it centers and values human rights, gender equity and peace and security in its foreign policy, the Canadian government has not lived up to these values in practice. Not only has the Canadian government failed to unambiguously condemn the Ethiopian government’s violations but it has continued to financially and diplomatically support a regime deliberately starving millions of its own citizens.

How can people across Canada help?

More than mere numbers and statistics, the lives lost in Tigray are real people. To Tigrayan-Canadians, they are our mothers, fathers, sisters, and brothers and we have been calling on our government to act to save their lives. Half-hearted statements of concern are no longer enough.

It is past time for our government to take concrete action to end the atrocities. Canada’s ongoing financial support to a genocidal regime in Ethiopia must not be tolerated by the Canadian public or our elected officials. Therefore, we ask the Government of Canada to join the United States and other allies in taking concrete steps to help stop the suffering and death of countless innocent people whose only crime is their ethnicity. Finally, we ask people across Canada to echo our calls and join us in demanding better from our government.

For more information and for different ways to get involved, please visit OmnaTigray.org.