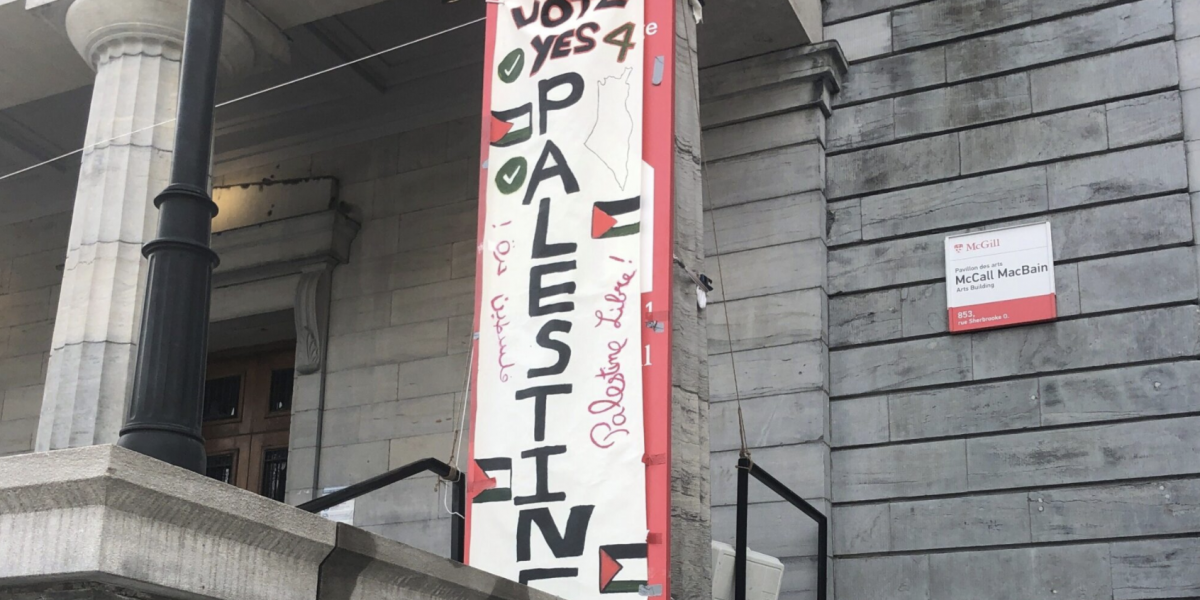 On March 21, the Palestine Solidarity Policy was overwhelmingly approved by the undergraduate students of McGill University in the Winter 2022 Referendum, garnering a 71 per cent “yes” vote.

The policy mandates the Students’ Society of McGill University (SSMU) to campaign for McGill University to condemn Canary Mission and other surveillance against Palestinian students, as well as boycott and divest from corporations or institutions complicit in settler-colonial apartheid against Palestinians. Furthermore, the SSMU will form a Palestine Solidarity Committee, which will be tasked with implementing the policy, and whose decisions will be subject to ratification by the student body via future referenda. The committee will also issue at least one public statement each semester, including a statement on Nakba Day, reaffirming the SSMU’s solidarity with Palestinian students and Palestinian liberation.

Just before voting commenced on March 14, the SSMU Judicial Board staged a last-ditch attempt to remove the policy from the referendum. Following our swift denunciation of this brazen violation of the democratic process and public outcry, Elections SSMU restored the policy to the ballot and issued a semi-apologetic statement. At this time, the Judicial Board has still not publicly apologized for its disgraceful undermining of student democracy.

Unfortunately, bodies within the SSMU have frequently engaged in the silencing of Palestinian students. Last year, members of the Board of Directors repeatedly delayed the ratification of the Divest for Human Rights Policy, and later refused to ratify a Nakba Day statement, which had been approved by the SSMU Legislative Council. As for the Judicial Board, its decision to strike down a BDS motion as “unconstitutional” in 2016 struck a devastating blow to free speech and political organizing on campus for many years. The Judicial Board’s more recent attempt to derail the Palestine Solidarity Policy indicates that SSMU officials have not forsaken the temptation to abuse their power.

We fully expected that the administration, in collaboration with off-campus organizations, would do everything in its power to overturn the democratic voice of the students. It therefore came as no surprise when Deputy Provost Fabrice Labeau hurriedly sent out a mass email demanding that the SSMU overturn the Palestine Solidarity Policy and threatening to terminate the Memorandum of Agreement with SSMU. As justification, he claimed that the policy violates the SSMU Constitution, since it “echoes key tenets of the Boycott, Divestment, Sanctions (BDS) movement.” However, the Judicial Board issued three separate rulings in 2021, all of which affirm the constitutionality of political campaigns against corporate or state entities, including BDS-related campaigns.

None of these undemocratic actions should surprise anyone, given that the McGill administration has always fought tooth and nail against efforts that challenge its complicity in settler-colonial apartheid against Palestinians, just as it continues to stubbornly reject divestment from the fossil fuel industry. Indeed, only after sustained student activism did McGill finally cut its ties with institutions and corporations profiting from the South African apartheid regime in the 1980s.

In response to Labeau’s cowardly email, SPHR McGill organized a victory rally in front of the James Administration building on Friday, March 25. The presence of over two hundred students, staff, faculty, and community members represented a powerful rejection of the Deputy Provost’s attack on student democracy, as well as a celebration of this unprecedented victory. We now fully expect the SSMU to follow through on its promise to strongly resist the McGill administration’s shameful intimidation, and continue implementing the policy.

We cannot overstate the importance of this historic victory for Palestinian students at McGill University, and for the Palestine solidarity movement across Turtle Island. For two decades, Palestinian students at McGill have worked tirelessly to educate their peers about the complicity of this institution in settler-colonial apartheid. Time and time again, their activism has been met with censorship, blacklisting, and repression from an openly hostile McGill administration.

During the referendum, our comrades at Divest McGill, the Black Student Network (BSN), CKUT Radio, and other anti-colonial and social justice communities reminded us of the strength of their solidarity by wholeheartedly embracing the Palestine Solidarity Policy. While we champion the cause of Palestinian liberation, we must never forget its place within the broader, global struggle against colonialism, racism, imperialism, militarism, and capitalism.

On March 21, the students of McGill University showed that no blacklist, no threat from the McGill administration, and no smear campaign is strong enough to defeat the popular power of students, when these students choose to reject their University’s active participation in the settler-colonial oppression of the Palestinian people.

Photo and article first published on the McGill Tribune.