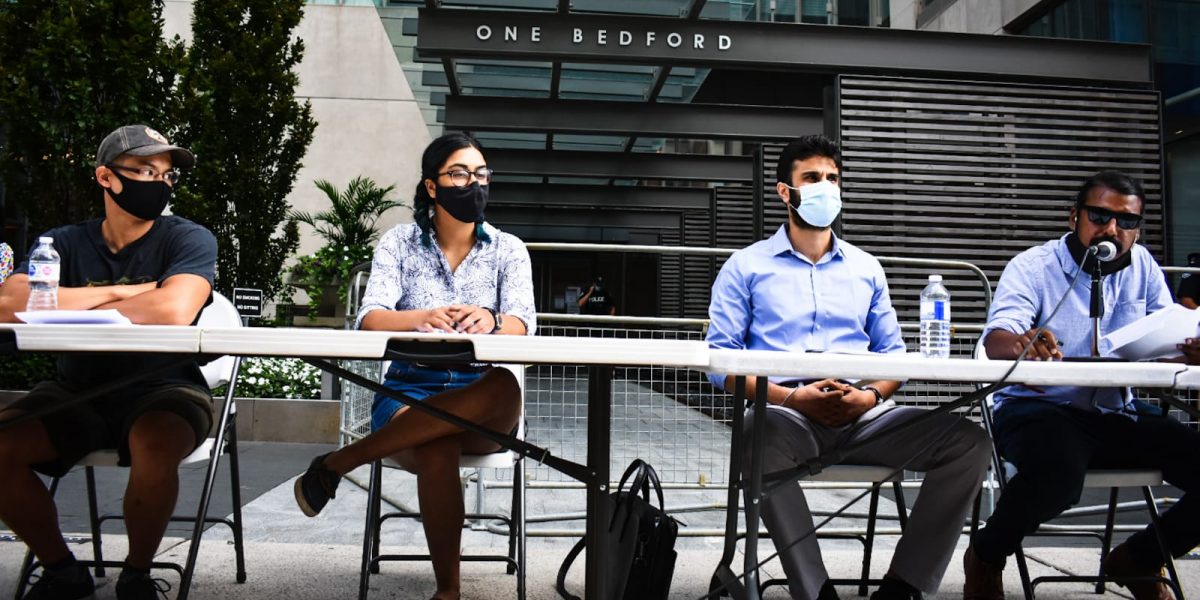 Surrounded by members of the press and Toronto police officers, housing justice organizers, tenants and workers from across Toronto held a press conference in front of One Bedford Road, the residence of Mayor John Tory. They called the press conference this afternoon to demand that Mayor Tory find the political will to avert a looming humanitarian crisis as thousands of tenants across the city face the prospect of eviction in the midst of the global pandemic.

Whose paying the price for the pandemic?

Samuel Nithianthan, an organizer with Peoples’ Defence Toronto, stated that the pandemic has hit low-income, racialized and immigrant communities the hardest.

“Essential workers, personal support workers, Uber drivers, grocery store clerks, people we’ve spent the last five months calling heroes are the ones who are struggling to make ends means,” said Nithianthan. “And along with them, people who through no fault of their own lost their jobs still do not know when they can go back to work are the ones who stand on the edge of a cliff facing mass evictions because of Bill 184.”

At the beginning of the pandemic, Doug Ford declared that no evictions would be enforced during the pandemic. Now the provincial Conservatives, in a bid to rush the economic reopening, are set to lift the moratorium on evictions on August 1. Last week, the provincial government passed Bill 184 into legislation, giving landlords greater power to evict tenants from their homes. According to the act, landlords can move to evict a tenant who fails to meet the terms of a repayment agreement between the landlord and the tenant. While tenants remain free to not sign an agreement, it may be used against the tenant during a Landlord and Tenant Board (LTB) hearing where the landlord files for eviction.

While the premier promised that not a single person would be evicted, the bill’s provisions apply retroactively to March even while many people have been struggling with income. The province, for its part, claims that the new bill will help to “modernize and streamline the dispute resolution processes at the LTB and encourage the use of alternatives to formal hearings to resolve certain issues and encourage negotiated settlements.”

While landlords can be forced to pay a tenant one month’s worth of rent under the act for improperly evicting a tenant, many housing advocates point out that it’s too little, too late as tenants are forced to leave their homes, clearing the way for increased rent in the residential unit.

Tenants make up 47% of all people living in the city where 70% of rental units are owned by corporate landlords, in a context where unemployment rates have surged to their highest levels in 40 years. Nithianthan indicated that CERB payments are $200 short of the average rent for a one-bedroom apartment in the city.

“We’re not talking about mom and pop renting out their basements anymore. We are talking about multi-billion dollar firms who have garnered record profits overinflated rent for years,” said Nithianthan. “Those same people who helped create Toronto’s housing and homelessness crisis are only concerned with making a profit even in the midst of this pandemic.”

6000 eviction applications have already been filed by landlords across the city during the pandemic, and if Bill 184 is enforced thousands more will be displaced from their homes.

“Mayor Tory said yesterday that he said he wished he had magical powers to stop the evictions. I’m here to share the good news: there is no need to resort to magic. Mayor Tory has the legal power under the Emergency Management and Civil Protection Act (EMCPA) to ban evictions in Toronto today,” said Parmbir Gill, a lawyer. “The act allows the mayor of any city in Ontario to declare a city-wide state of emergency and, in fact, Mayor Tory declared such an emergency on March 23. It remains in effect to this day.”

Gill explained that when the mayor declared the emergency he legally picked up a new set of powers under the EMCPA. The act grants the mayor broad powers during a declared emergency.

“The power is broad enough to give Mayor Tory the ability to ban evictions in this city,” added Gill. “The ban can last for as long as the municipal emergency remains in effect.”

Mayor Tory claims that the act specifically prohibits any orders that are “contrary to law” because the city has no authority to make decisions over matters falling into provincial jurisdiction like housing. Gill explained that the city of Toronto is already involved in housing matters such as the landlord’s maintenance obligations.

While the mayor claims that ordering a stop to evictions under emergency powers would “frustrate the purposes of the residential tenancies act,” Gill indicated that there are no provisions with the provincial Residential Tenancies Act (RTA) that facilitate mass evictions.

Gill outlined four measures that the eviction ban should include:

Pri Sharma is a member of the Ontario Public Service Employees Union (OPSEU) and works in the legal clinic system. She spoke about the many OPSEU members who work in the city’s shelter system throughout the pandemic, and connected their work to OPSEU members who are employed by the Landlord and Tenant Board. Sharma called upon fellow OPSEU members to refuse any direction from their employer to administer the evictions process.

“Unionized workers will be required at every stage of the eviction process and without those workers evictions would be impossible,” said Sharma. “Participating in COVID evictions means working against the public interest.

As Sharma noted more evictions mean will only create further strain on pressure the shelter system and put increasing pressure on the OPSEU members who work in the shelter system. If more evictions occur, those workers will face increasingly dangerous conditions. This would be at odds with OPSEU’s advocacy for more funding, safety, and shelter beds.