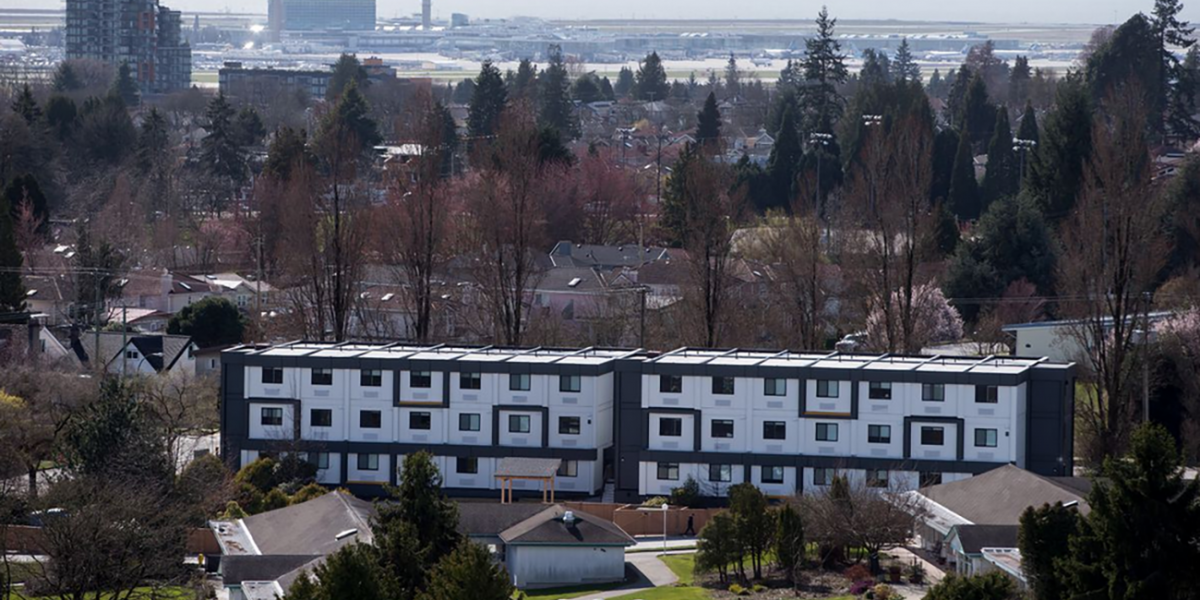 It’s clear to everyone that Vancouver, like many North American cities, is in the midst of a housing crisis. With the minimum wage only $13.85 an hour and the average price of a one bedroom apartment over $2000 a month, low-income renters have few options. Some low-income tenants had felt lucky to live in the reasonably-priced South Vancouver neighbourhood of Marpole, where rents in older but still functional buildings are below the city average. However, developers have their eyes on these buildings, and have started buying them up in order to demolish and replace them with larger and much more expensive rental buildings—all under the guise of solving the housing crisis by “increasing supply.”

This May, two Marpole apartment buildings, 8656 and 8636 Oak Street, were in the news when the owner’s proposed redevelopment plans were shared to the press. The owner proposed to tear down the two buildings, replacing the present 45 rental units with two larger buildings containing 91 units total. Which sounds fine until you realize that the average monthly rent of $768 for a one bedroom unit would jump to $1875/month in the new building—a 145% rent increase. But because the new rent would still be less than the $2000/month city average, it could be claimed by the city and the developer to be “affordable,” and even receive DCL (development cost levy) waivers—in other words, a tax cut. The owner offered returning tenants a “deal” of rents discounted by 30%, but these would still represent a 71% increase over their present rents. Since these tenants were mostly working class folks earning minimum wage, returning to the building would be impossible.

When tenant organizers with the Vancouver Tenants Union (VTU) learned of the plan for this building, they visited the building, knocking on doors to inform the tenants of their rights, and to see if they wished to fight this demoviction. The building already had a community of mostly Filipina tenants who knew each other, and with only a little help from organizers a few of them rose to the task of contacting all the tenants in this very diverse building, to meet and plan how they would fight back to protect their homes. This was no small task, since the majority of the tenants were newcomers to Canada, some speaking little English. Some tenants volunteered to translate for each other, which helped get the message out. Still, many of the tenants worked evening shifts in low wage retail, childcare and homecare jobs, and couldn’t easily afford to miss a shift to come to a tenant meeting, or even get their employer to vary their schedule so that they could meet with organizers.

To make sure that city councilors heard their stories, tenants in these buildings wrote emails to council in advance of the September 10 city public hearing on rezoning, and several tenants came to the public hearing to speak. These were racialized, newcomer tenants who had never been to City Hall, and had never spoken at any sort of public event. Most hadn’t ever been activists in the past, but they realized that no one else could explain better than them what this building meant to them, so they overcame their fears and spoke to council. A couple of tenants also spoke to media, and gave a speech at the support rally held by the VTU on the steps of City Hall just prior to the meeting.

Sandra, one of the key tenants in the building, said in her statement to council: “I work at Superstore as a cashier. I live at 8656 Oak street with my family. We moved into this place in January, 2016. We love our place, and the Marpole community itself. When they informed us about the rezoning I was deeply sad and anxious. It came to my mind, where can we stay with my family? Will we become homeless? So I started looking for a place, and I found out that the rentals are extremely high: for a one bedroom that is relatively small, the rate ranges from $ 1200 to $1500 or higher. What we’re paying now is only $730 a month. We belong to a low-income family, working at the rate of $14 an hour. Although we come from a low income family, we value hard work. We want to be productive citizens of this province. We arrived in Canada 5 years ago. All of us are just starting our life here in BC. We will be grateful if the building is not demolished.”

Other tenants also spoke to the importance of retaining the affordable rentals in their building, and saying no to the rezoning. Tsering, a newcomer from Tibet who works as a care aide and companion, spoke about how many of the tenants in the building like her work multiple jobs to make ends meet. “Some people work two or three jobs to save to send money back home. I share a one bedroom with my cousin’s sister. Personally, I have moved five times, and every time, I feel like this apartment feels like home, I want it to feel like home. But now, it’s like, where to go, and now what am I to do. The rent is too high, and this building doesn’t need to be rezoned, it is really liveable, and in the building, everyone is really friendly. So we are really hoping, please, please, to make our place liveable and affordable.”

Bing, who works as a nanny, explained exactly how unaffordable even the “discounted” rents would be. “If the building will be knocked down, we will need to move to a smaller place. We wanted to go back in the new building because they said it was going to be affordable, but now that they’re saying its going to be more than $1300, I don’t think we will be able to afford it. I don’t have lots of money, only about $2000 a month. Our current rent is $720 a month, and when we looked in the neighbourhood, rents are $1100 a month to $1400 a month, and more. A rent increase is not affordable for us. Right now, we love to go home to the Philippines once in a while to see our families, and losing this building means we will lose that as well. The city should build more affordable housing. The rent increase will drive us out. So we are asking the city to reject the rezoning application, and leave the building alone.”

Of course, there were also a handful of pro-demolition speakers. All of them praised the developer for “increasing supply,” seemingly oblivious to the moving speeches from the actual tenants. One of these speakers, when pressed by council to divulge whether he had some connection to the developer, had to admit that not only did he not live in the Marpole area but that he resided in the suburb of Port Moody—almost an hour’s drive away. “That’s how far away they had to look to find someone who supports this plan,” a fellow organizer whispered, as tenants and supporters in the gallery laughed. Another pro-development fellow in a suit admitted that he “wasn’t familiar with the details of the plan” but mentioned that he could tell the buildings were too old simply by “observing them while driving by.” None of the handful of rezoning supporters’ arguments took any notice of the human cost of this development; to them, the tenants in the room might as well have been invisible.

These tenants were absolutely inspiring. Supporters in the gallery and watching online who heard them speak couldn’t help but be moved. As one organizer said, “I got to catch the last part of the meeting online… For those working with these tenants, I hope the tenants know how amazing they are. So brave. I was just gutted watching them … and we were in tears. It killed me to watch them having to divulge personal information such as finances, sleeping arrangements, marital status etc. This process is so violent. I cannot fathom how anyone can listen to them and then vote to destroy their homes.”

And of course, that is how five out of nine city councilors did vote. Since the council meeting ran over-time, the actual vote was held over until next day’s council meeting. Mayor Kennedy Stewart was conveniently away at a prior engagement, so we didn’t find out how he would have voted. Before the vote, city staff pushed hard for council to approve the rezoning and pave the way for demolition. Much was made by staff and the developer of the fact that the development met the guidelines of the Tenant Relocation Protection Policy (TRPP), which would assure that low income tenants (i.e. those making less than $30, 000/year) would be guaranteed new accommodations costing only 30% of income. But as VTU advocates had pointed out the previous day, no such affordable rentals exist in Vancouver, with a 0.5% vacancy rate and a several-year waitlist for social housing. But the factor that likely convinced some councilors to vote for rezoning was that the owner had submitted a last-minute change to their proposal, offering returning tenants a 40% discount upon return to the new building rather than 30%. In reality, however, this would only mean a 57% rent increase for returning low-income tenants rather than a 71% increase—which is hardly affordable.

City councilor Adrienne Carr of the Greens ended up being the swing vote that allowed the rezoning to pass. Did she really believe that this concession by the owner would protect these tenants, or did this extra 10% off just provide an excuse for her to support the rezoning pushed for so hard by city staff and developers? The latter seems more likely, since so many on council seem to buy in to the idea that increased supply, regardless of how unaffordable it is, or how many vulnerable tenants it displaces, must always be supported as some kind of solution to the housing crisis. Of course, we know that greater supply of rental units isn’t going to help solve the problem unless those rentals are truly affordable. But the fact that a Green councilor voted against protecting tenants isn’t the most important lesson in this story so far.

The lesson that Marpole tenants and organizers should draw from this council decision is that tenant power brought us within one vote of defeating this rezoning motion. Without the social weight of tenants, faith leaders, community members and tenant organizers that made up the vast majority of the speakers’ list at that council meeting, the vote would likely have been 7 to 2 in favour of rezoning. With an even broader and larger base of tenants, people from faith communities and workers, I believe we could win the next vote.

And the tenants of 8636 and 8656 Oak? They are already making plans to come together in the next weeks to decide how we will stop the permits for demolition of their buildings from being issued. This battle, and the larger struggle against demovictions in Vancouver, is not yet over. Now, these tenants realize that as part of a collective, they can take an active role in fighting for their homes. And they won’t give up easily. Just watch them.

Do you live in the Vancouver area, and want to join an inspiring movement for housing justice and tenant power? Contact the VTU at  tenantsunion.yvr@gmail.com or in Marpole, at marpolevtu@gmail.com  and check out the VTU website at www.vancouvertenantsunion.ca