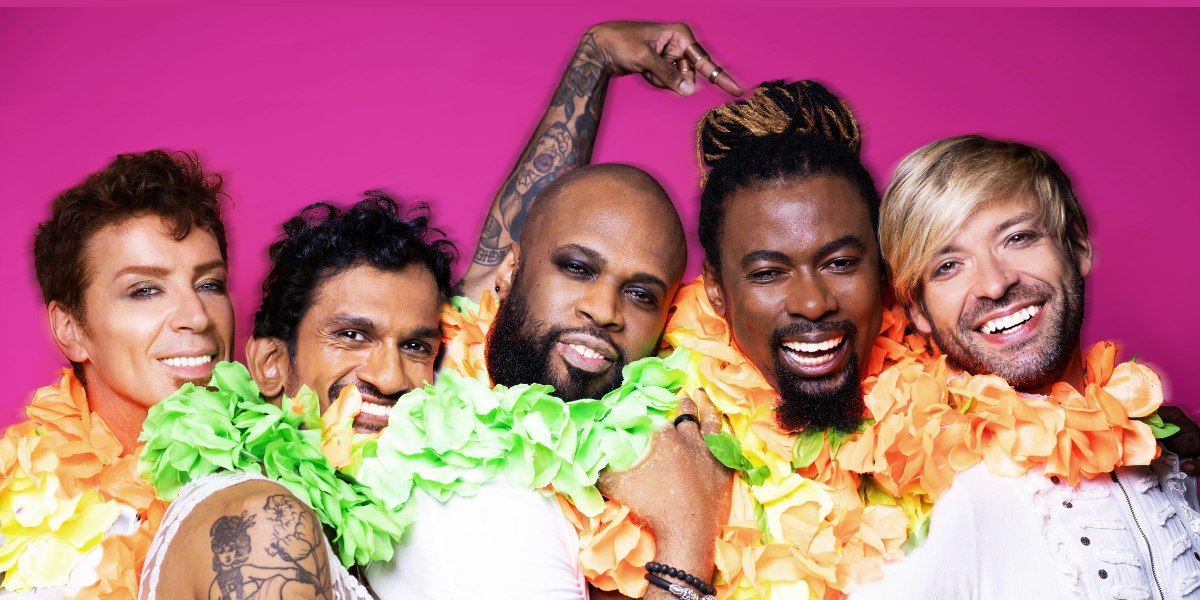 MANifesto have just released their debut album, Pinky Swear, envisioned around the idea of increasing inclusivity and to promote Rainbow Railroad, an organization very dear to them, with a wish to bring visibility and fundraising to the most disenfranchised of the global queer population.

MANifesto, a self-described ManBand, presents a collection of 12 pop gems, spanning over seven decades of pop music. The quintet utilize their feverish energy and stacked harmonies to tie the whole album together.

A full spectrum of voices and experiences

The brainchild of R Kelly Clipperton (Kelly and the Kellygirls, Merkury Burn), MANifesto emerged out of a need for visibility and inclusion.

“I’ve adored Girl Groups forever and desperately wanted to be part of their tribe. I’ve also loved singing with other voices: harmonizing and supporting, and realized I’d never attempted that with other Out Gay Men,” says Clipperton. “The project developed out of these impulses.”

Clipperton searched through Toronto to find the right voices and energies to complete the lineup, citing diversity as a paramount element.

“Having a full spectrum of voices and experience was key,” notes Clipperton.

MANifesto began releasing singles in February ’19, starting with Automatic (Pointer Sisters), followed by the mid-Pan Dam scorcher The Promise (Girls Aloud), and this Pride’s anthem, Say You’ll Be There (Spice Girls). The three singles have all had accompanying videos that showcase the group’s newfound friendship in humor, dance, joy, and theatrics. A fourth single: Lady Marmalade (Labelle) launched with the release of the album.

Other covers on the album include the likes of Bananarama, Fifth Harmony, The Supremes, and En Vogue.

But the album isn’t just straight covers. The focus on male vocals and harmonies are played in front of an instrumentation and production that should throw anyone of a certain age back to their MuchDance Mix ‘93 and ‘94 tapes, choreographing their own shows and busting moves like no one’s business.

“The song selection was pretty organic,” says Clipperton. “When we started in the summer of ’19, we amassed many different songs and sang them to see if our voices fit well. We also began paying particular attention to lyrics that we could interpret in different ways. Singing songs written (in most cases) by men, for women to sing, and now being presented by us. There was a lot to dig into.”

A big part of the journey is brotherly support. Gay men are rarely presented as unified in the public eye and are certainly one of the last great taboos when it comes to acceptance and understanding.

“This record is part tribute, part testimony, and part triumph. There are so many communities and elements at play that have given us the lives we lead.  We feel all of those are wrapped up and presented in this work.”

The album was released as a way to help promote Rainbow Railroad, the not-for-profit ‘helps LGTBQI+ people facing persecution based on their sexual orientation, gender identity and sex characteristics. In a time when there are more displaced people than ever before, LGBTQI+ people are uniquely vulnerable due to systemic, state-enabled homophobia and transphobia. These factors either displace them in their own country or prevent them from escaping harm.’

Brayo, one of the members of MANifesto, has first-hand experience with the work the organization can do.

“Having been a victim of persecution from my home country Uganda (East Africa), my life was in danger and Rainbow Railroad was able to get me a ticket and safe passage to Toronto,” said Brayo in a recent interview. “There are many LGBTQIA+ suffering in different countries that still criminalise homosexuality and they have no way out to safety. We believe supporting the Rainbow Railroad would increase their capacity to be able to help our people out there. I would not be here performing with this amazing group of gay men if it was not for Rainbow Railroad, God knows I would not even be alive. That’s why MANifesto agreed to do whatever we can, however small the contribution, to at least save someone’s life.”

“We, foremost, want to elevate ourselves as openly gay men within this concept; a unifying adventure, and secondly want to bring as many glorious souls along with us on the ride,” says Clipperton. “Though this has been a challenge to keep afloat throughout this difficult year and a half, we honestly feel the timing couldn’t be better for a record like this.”

To find out more about Rainbow Railroad. You can find MANifesto on Apple Music, Spotify, Bandcamp, and Instagram.