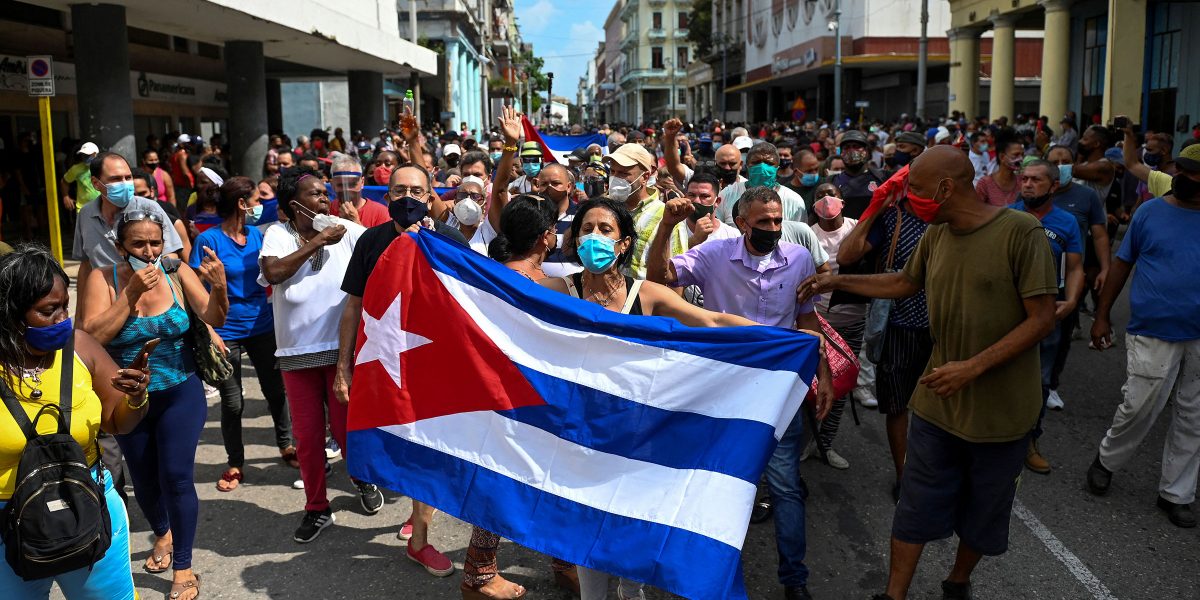 In the last few weeks, Cubans have poured out into the streets in relatively large numbers denouncing scarce access to food, medicine, and other necessities in the country. While turnout was perhaps small compared to mass demonstrations in other Latin American countries, it was nonetheless significant for a country where protest is effectively illegal and unsanctioned demonstrations are rare.

While many protesters have been critical of the government’s handling of the country’s economic crisis, other Cubans organized demonstrations in support of the state administration, led by President Miguel Diaz-Canel, and in support of the Cuban Revolution more broadly.

However, mainstream media has confused pro-government rallies with anti-government rallies, and accurate reporting is impeded by the government’s suspension of internet access and the repression of journalists. It has been challenging to get a clear sense of the magnitude and message of the protests.

Activists inspired by the Cuban Revolution are met with similar obstacles we have seen in other countries. American imperialism has consistently co-opted Cuban protest and dissent for its own interest. This has a chill effect on those who wish to offer up critiques of the Cuban government, but who do not wish to support an imperialist agenda.

This is the complicated terrain that supporters are trudging through as we consider how best to ally with Cubans and advance progressive politics during this critical time. This means grappling with Cuba’s repression of dissenters, the legacy of the Cuban revolution, and the devastating impact of the US embargo in Cuba, which has caused a humanitarian crisis and violates Cuba’s right to self-determination.

Protests in light of the embargo

For those of us with loved ones in Cuba, these past weeks have been intense. I spiralled into alarm when my partner, who lives in Cuba, expressed heightened concerns regarding his access to basic food supplies in this time of political uncertainty. Then, once the protests had wound down, my partner told me he was fighting a fever. I was in a state of distress thinking about my partner’s well-being. This week we learned that he had contracted COVID-19.

There is a severe shortage of even basic medicines like ibuprofen and acetaminophen on the island, which means that many Cubans just don’t have the same tools of defense against COVID-19 that we have here in Canada.

As Cubans hit the streets in protest, the US used the demonstrations as an opportunity to further vilify the Cuban government and intensify its 60-year long embargo. The effects of this on the ground have been felt immediately.

The embargo exists because Cuba poses a threat to US capitalism.

When right-wing dictator Fulgencio Batista was overthrown in 1959, American capitalists quickly saw their business investments targeted through the revolution’s introduction of agrarian reforms and the nationalization of private assets. Fearful that the socialist ideologies that led to the Cuban Revolution would spread to other parts of the world and undermine American capitalist interests, the US launched its embargo against Cuba under President John F. Kennedy. The ongoing embargo has been widely condemned by member states of the United Nations for the past 29 years.

The embargo has been accompanied by numerous assassination attempts by the CIA of Fidel Castro, and other forms of violence intended to incite resistance to the Cuban government and debilitate the economy. For example, a 1971 swine flu outbreak in Cuba, which resulted in the slaughter of 500,000 pigs and a meat shortage, has been tied to the US Central Intelligence Agency (CIA).

The Cuban economy has been strangled by the embargo, and the pandemic has exacerbated this intentional suffocation of the Cuban people. The Trump administration introduced an onslaught of new economic sanctions against Cuba, which remain in place under the Biden administration. In January of this year, the US, without evidence, again designated Cuba a state sponsor of terrorism. The designation increased controls regarding foreign assistance and expanded penalties for partners engaging in trade with Cuba.

In the face of its worst economic crisis in decades, the Cuban government initiated a neoliberal fiscal reform in January, announcing the devaluation of the Cuban peso, which occurred alongside the elimination of the CUC. While state salaries were raised to help Cubans combat devaluation, raises were insufficient. The impact of COVID has only exacerbated the economic crisis.

This has occurred alongside the introduction of state-owned US-dollar stores, whereby food and other basic staples have been sold in stores only accepting US currency, which can be loaded onto bank cards for payment. The Cuban government introduced these stores in response to its liquidity crisis, giving the government greater access to US dollars. But the shelves were emptied in the stores that accept Cuban pesos–the currency in which Cubans receive state salaries.

The dollar stores have been a disaster for Cubans. When I visited my partner in February, we visited a dollar store together because of my access, as a Canadian citizen, to foreign currency. We left central Havana to find a well-stocked store in the suburbs, and we waited in line for six hours in hopes that the basic staples we were seeking would still be in stock by the time we reached the front of the line.

Many Cubans, however, don’t have access to American currency. Those who do can buy up products in the dollar stores and sell them on the street in pesos at higher prices. Desperation to access US dollars has pushed up the currency’s street value, with the US dollar being exchanged on the street at 200 per cent its value exchanged in Cuban Casa de Cambios, or currency exchange centres, where US dollars can be turned in but not taken out.

Now, as Cubans are hitting the streets to protest economic hardship, the US government and other right-wing forces have been quick to hype the protests and co-opt the movement in the interests of American capital. The protests have been characterized as anti-government and anti-dictatorship, with US President Joe Biden pouncing at the opportunity to express support for the Cuban people who are “demanding their freedom from an authoritarian regime.” His words are hypocritical given the American 60-year-long violent economic onslaught against the Cuban people.

The history of the Cuban Revolution is important because it helps us understand why the US today is so hostile to Cuba, and why the US is interested in undermining Cuba’s sovereignty.

Despite the US’s relentless efforts to undermine the Cuban Revolution and sow seeds of division, Cuba has been able to advance a socialist program that has meaningfully tackled inequality. Cuba’s massive social and political achievements are an important juxtaposition to the demonized narrative of Cuba in right-wing media that gives ideological steam to the embargo.

When Fidel Castro came to power in 1959, the government launched a nationwide education program that nearly abolished illiteracy. It institutionalized an egalitarian approach to healthcare. And Cuba’s education system became free from the cradle to the grave. Cuba found allyship with global leaders like Nelson Mandela, who praised Cuba for its role in combatting South African Apartheid and colonialism. When South Africa invaded Angola, Cuba sent 36,000 troops to defend against the apartheid government’s military invasion. And it has provided asylum to persecuted Black revolutionaries, such as Assata Shakur, who fled the United States in the 1970s. The Cuban government has repeatedly defended and protected her at their cost, refusing to exchange her in prisoner swaps or for economic renumeration.

With a ratio of 8.4 physicians per 1,000, Cuba has one of the highest rates in the world of doctors per capita. It has a longstanding practice of medical internationalism, and it sends doctors to countries facing humanitarian crises.

Cuba made headlines last year for its crew of doctors dispatched globally to fight the pandemic. And in the face of economic sanctions and US hostility, Cuba has developed five COVID-19 vaccines that may eventually be distributed on a global scale, without exploiting the crisis for profit as Big Pharma has.

In contrast, the US blockade has prevented medical supplies from reaching Cuba during the pandemic and both the US and Canada have hoarded vaccines.

Solidarity in the context of Cuba

We see glimpses of Cuba’s revolutionary history in its relationship with the world, which provide a valuable opportunity for anti-capitalists to renew our commitment to internationalism. Capitalism is a global system requiring an internationally-united challenge to oppression. The best way we can support Cubans is by spreading revolutionary politics in Canada. Ultimately, we need to build a world where Cuba’s socialist system does not exist in isolation.

Until then, we should push the Canadian government to pressure the US through its diplomatic and economic relationship to end the embargo against Cuba. Canada should increase aid and assistance to Cuba–without conditions–as one small step towards alleviating some of the hardships facing Cubans at this moment.

When I was in Cuba five months ago, protests were already unfolding, with Cubans demonstrating against the dollar stores. It wasn’t wealthy Cubans protesting. Those without ties abroad have been the hardest hit by the crisis.

This reality makes the recent arrests of protesters and shut down of the Internet particularly concerning. But it’s not surprising. Over the decades, we’ve seen in Cuba a systematic criminalization of dissent of artists, journalists, and those engaged in queer organizing.

My allegiance is to people experiencing oppression in all its forms. This means defending the right of working-class people to voice dissent against state policy and power, even in the context of a socialist government. The government should answer these concerns not with repression, but with the values of the revolution it upholds.

It is important that those of us in Canada express solidarity and friendship with the Cuban people and support their right to self-determination. Solidarity means calling for an end to the US embargo, denouncing capitalism and US imperialism, and organizing mutual aid to Cubans in this time of crisis. The embargo and US interventionism needs to be centred in our conversations, since they are the root causes of the economic crisis in Cuba and forms of political coercion that violate Cuba’s right to self-determination.

To get more information on how you can help end the US embargo against Cuba, connect with a local Cuba friendship organization: http://canadiannetworkoncuba.ca.

This article was originally published in Upping the Anti: A journal of theory and action on August 13, 2021.