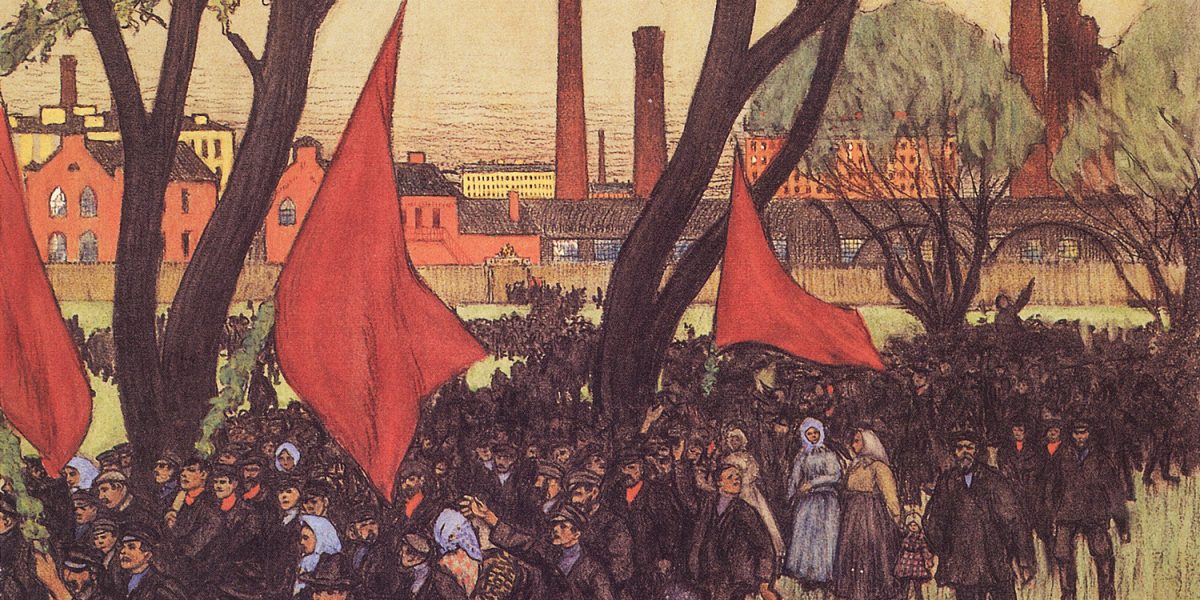 May Day is celebrated as a day of international workers’ solidarity, a day to express our shared political aspirations for freedom and a day that points to a future without the oppression and exploitation of the capitalist state. Here two leading revolutionary socialists, Rosa Luxemburg and Vladimir Ilyich Lenin, describe the origins and meaning of May Day.

The happy idea of using a proletarian holiday celebration as a means to attain the eight-hour day was first born in Australia. The workers there decided in 1856 to organize a day of complete stoppage together with meetings and entertainment as a demonstration in favor of the eight-hour day. The day of this celebration was to be April 21. At first, the Australian workers intended this only for the year 1856. But this first celebration had such a strong effect on the proletarian masses of Australia, enlivening them and leading to new agitation, that it was decided to repeat the celebration every year.

In fact, what could give the workers greater courage and faith in their own strength than a mass work stoppage which they had decided themselves? What could give more courage to the eternal slaves of the factories and the workshops than the mustering of their own troops? Thus, the idea of a proletarian celebration was quickly accepted and, from Australia, began to spread to other countries until finally it had conquered the whole proletarian world.

The first to follow the example of the Australian workers were the Americans. In 1886 they decided that May 1 should be the day of universal work stoppage. On this day 200,000 of them left their work and demanded the eight-hour day. Later, police and legal harassment prevented the workers for many years from repeating this [size] demonstration. However in 1888 they renewed their decision and decided that the next celebration would be May 1, 1890.

In the meanwhile, the workers’ movement in Europe had grown strong and animated. The most powerful expression of this movement occurred at the International Workers’ Congress in 1889. At this Congress, attended by four hundred delegates, it was decided that the eight-hour day must be the first demand. Whereupon the delegate of the French unions, the worker Lavigne from Bordeaux, moved that this demand be expressed in all countries through a universal work stoppage. The delegate of the American workers called attention to the decision of his comrades to strike on May 1, 1890, and the Congress decided on this date for the universal proletarian celebration.

In this case, as thirty years before in Australia, the workers really thought only of a one-time demonstration. The Congress decided that the workers of all lands would demonstrate together for the eight-hour day on May 1, 1890. No one spoke of a repetition of the holiday for the next years. Naturally no one could predict the lightning-like way in which this idea would succeed and how quickly it would be adopted by the working classes. However, it was enough to celebrate the May Day simply one time in order that everyone understand and feel that May Day must be a yearly and continuing institution […].

The first of May demanded the introduction of the eight-hour day. But even after this goal was reached, May Day was not given up. As long as the struggle of the workers against the bourgeoisie and the ruling class continues, as long as all demands are not met, May Day will be the yearly expression of these demands. And, when better days dawn, when the working class of the world has won its deliverance then too humanity will probably celebrate May Day in honor of the bitter struggles and the many sufferings of the past.

Comrade workers! May Day is coming, the day when the workers of all lands celebrate Their awakening to a class- conscious life, their solidarity in the struggle against all coercion and oppression of man by man, the struggle to free the toiling millions from hunger, poverty, and humiliation. Two worlds stand facing each other in this great struggle: the world of capital and the world of labour, the world of exploitation and slavery and the world of brotherhood and freedom.

On one side stand the handful of rich blood-suckers. They have seized the factories and mills, the tools and machinery, have turned millions of acres of land and mountains of money into their private property. They have made the government and the army their servants, faithful watchdogs of the wealth they have amassed.

On the other side stand the millions of the disinherited. They are forced to beg the moneybags for permission to work for them. By their labour they create all wealth; yet all their lives long they have to struggle for a crust of bread, beg for work as for charity, sap their strength and health by back-breaking toil, and starve in hovels in the villages or in the cellars and garrets of the big cities.

But now these disinherited toilers have declared war on the moneybags and exploiters. The workers of all lands are fighting to free labour from wage slavery, from poverty and want. They are fighting for a system of society where the wealth created by the common labour will go to benefit, not a handful of rich men, but all those who work. They want to make the land and the factories, mills, and machines the common property of all toilers. They want to do away with the division into rich and poor, want the fruits of labour to go to the labourers themselves, and all the achievements of the human mind, all improvements in ways of working, to improve the lot of the man who works, and not serve as a means of oppressing him.

The great struggle of labour against capital has cost the workers of all countries immense sacrifices. They have shed rivers of blood in behalf of their right to a better life and real freedom. Those who fight for the workers’ cause are subjected by the governments to untold persecution. But in spite of all persecution the solidarity of the workers of the world is growing and gaining in strength. The workers are uniting more and more closely in socialist parties, the supporters of those parties are mounting into millions and are advancing steadily, step by step, towards complete victory over the class of capitalist exploiters.

The Russian proletariat, too, has awakened to a new life. It too has joined this great struggle. Gone are the days when our worker slaved submissively, seeing no escape from his state of bondage, no glimmer of light in his bitter life. Socialism has shown him the way out, and thousands upon thousands of fighters have thronged to the red banner, as to a guiding star. Strikes have shown the workers the power of unity, have taught them to fight back, have shown how formidable to capital organised labour can be. The workers have seen that it is off their labour that the capitalists and the government live and get fat. The workers have been fired with the spirit of united struggle, with the aspiration for freedom and for socialism. The workers have realised what a dark and evil force the tsarist autocracy is. The workers need freedom for their struggle, but the tsarist government binds them hand and foot. The workers need freedom of assembly, freedom to organise, freedom for newspapers and books, but the tsarist government crushes, with knout, prison and bayonet, every striving for freedom. The cry “Down with the autocracy!” has swept through the length and breadth of Russia, it has been sounded more and more often in the streets, at great mass meetings of the workers. Last summer tens of thousands of workers throughout the South of Russia rose up to fight for a better life, for freedom  from police tyranny. The bourgeoisie and government trembled at the sight of the formidable army of workers, which at one stroke brought to a standstill the entire industrial life of huge cities. Dozens of fighters for the workers’ cause fell beneath the bullets of the troops that tsarism sent against the internal enemy.

But there is no force that can vanquish this internal enemy, for the ruling classes and the government only live by its labour. There is no force on earth that could break the millions of workers, who are growing more and more class- conscious, more and more united and organised. Every defeat the workers sustain brings new fighters into the ranks, it awakens broader masses to new life and makes them prepare for fresh struggles.

And the events Russia is now passing through are such that this awakening of the worker masses is bound to be even more rapid and widespread, and we must strain every nerve to unite the ranks of the proletariat and prepare it for even more determined struggle. The war is making even the most backward sections of the proletariat take an interest in political affairs and problems. The war is showing up ever more clearly and vividly the utter rottenness of the autocratic order, the utter criminality of the police and court gang that is ruling Russia. Our people are perishing from want and starvation at home—yet they have been dragged into a ruinous and senseless war for alien territories lying thou sands of miles away and inhabited by foreign races. Our people are ground down in political slavery—yet they have been dragged into a war for the enslavement of other peoples. Our people demand a change of political order at home— but it is sought to divert their attention by the thunder of guns at the other end of the world. But the tsarist government has gone too far in its gamble, in its criminal squandering of the nation’s wealth and young manhood, sent to die on the shores of the Pacific. Every war puts a strain on the people, and the difficult war against cultured and free Japan is a frightful strain upon Russia. And this strain comes at a time when the structure of police despotism has already begun to totter under the blows of the awakening proletariat. The war is laying bare all the weak spots of the government, the war is tearing off all false disguises, the war is revealing all the inner rottenness; the war is making the preposterousness of the tsarist autocracy obvious to all and is showing everyone the death-agony of the old Russia, the Russia where the people are disfranchised, ignorant and cowed, the Russia that is still in serf bondage to the police government.

Comrade workers! Let us then prepare with redoubled energy for the decisive battle that is at hand! Let the ranks of the Social-Democrat proletarians close ever firmer! Let their word spread ever farther afield! Let campaigning for the workers’ demands be carried on ever more boldly! Let the celebration of May Day win thousands of new fighters to our cause and swell our forces in the great struggle for the freedom of all the people, for the liberation of all who toil from the yoke of capital!

Down with the criminal and plundering tsarist autocracy!