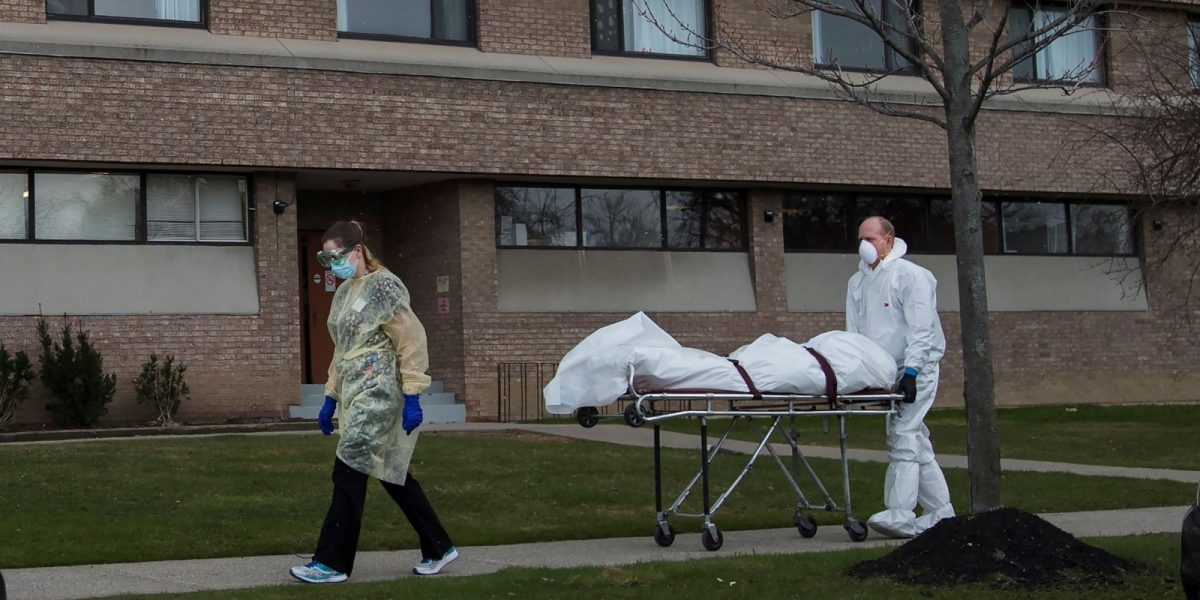 Early in the COVID-19 crisis, long-term care (LTC) homes in Canada were suddenly, and tragically, fosited into the limelight. The Washington Post back in May reported that Coronavirus-related deaths in Canada’s long-term care homes were far outstripping those in the United States.

The experience in Ontario was particularly gruesome: over 1,900 residents and staff have died of COVID-19 as of October 5, about 65% of all virus-related deaths in the province. And though the province got a handle on the virus in the spring and throughout the summer, the governing Progressive Conservatives failed to use the opportunity to introduce reforms at the behest of professionals and the public as did governments in Quebec and British Columbia.

As the “second wave” of the virus now charges through Ontario, this bill of unheeded pressure, evidence, and advice has come due. Outbreaks are again cropping up in Ontario’s nursing homes, re-exposing the gaps in the LTC system that became glaring just months earlier.

Now midway through the fall, and only a stone’s throw from winter, Ontario is careening towards another long-term care disaster. But the question should be asked: Why here? It is true that nursing homes worldwide experienced the scourge of the virus, even countries with decent healthcare systems. But Canada found, and still finds, itself particularly, acutely unequipped to deal with COVID-19. The reasons why are myriad — but a few factors are key to any analysis: for-profit care, deregulation, and public disinvestment.

Long-term care falls outside the purview of the Canada Health Act and is therefore not covered by Canada’s national public healthcare system. It is considered an “extended health” matter and is partly subsidized. An admixture of for-profit, non-profit, and public (municipal-run) homes are responsible for care. The percentage that each of these options represent in the sector has varied dramatically provincially and over time. In Ontario, nearly 60 percent of homes are privately-owned, compared to about 30% in provinces like British Columbia and Alberta.

Over the last 30 years, the system in Ontario has largely trended towards deregulation and private ownership — particularly following policies pursued under Mike Harris’ Conservatives in the mid-to-late 1990s. The Harris government tossed the minimum care standard — a crucial way that governments regulate LTCs — imposed in 1993 by the former New Democratic Party government.

The minimum care standard that Tories ripped up dictated that homes had to provide at least 2.25 hours of care per patient and maintain necessary staffing levels to meet that standard. There has been no minimum care standard since, though the NDP and many unions and advocacy groups have mobilized to have an even better one than before imposed. Most recently, the call has been for 4.1 hours of care per day, which has been formulated into Bill 13, the Time to Care Act — legislation advanced by the NDP which just passed second reading in the legislature. On the issue, a recent Canadian Centre for Policy Alternatives study recently reported that staffing levels in for-profit homes were lower than in public homes; about 2.63 hours of care per day in the former, compared to 3.5 in the latter.

For-profit homes were also found, in a recent study, to have been “smaller (lowest mean number of licensed beds), [have] the lowest proportion of single-occupancy rooms, [have] older design standards and [have] the highest proportion of chain ownership.” As well, outsourcing and contracting out across the private sector has impacted everything from food to sanitation to oversight in general — meaning standards and quality differ drastically home-to-home, and make control much more difficult.

The appalling conditions revealed by the damning military report illustrate not just the ills of deregulation and private ownership, but also the outcome of public disinvestment in the public homes we do have, ransacked by austerity and cuts.

As care standards have been scaled back, so too has the quality and infrastructure surrounding inspections. Oversight is another matter altogether. Prior to 2018, LTCs in Ontario were subject to comprehensive annual inspections before the Ford government introduced inspections with a “narrower” focus. And though private LTCs receive a large chunk of public money to operate, there is little accountability about where the money goes. In an interview with Macleans, Tamara Daly, a professor of health policy and administration at York University, commented that “We know that long-term costs 7% of public health care spending [in Ontario]. But we don’t know how it gets allocated between homes and we don’t know how it’s spent or how much profit is taken.”

She continues: “None of this stuff is publicly reported. And I like to say: we have public funding and we have private provision and private data. So we don’t have transparency. We don’t have accountability.” The Toronto Star did find, however, that the three biggest private operators in Ontario paid out $1.5 billion to shareholders over the last ten years. And sitting on the board of one of those operators — Chartwell — is former premier Mike Harris, now profiting off his work in office.

This “revolving door” doesn’t stop at Harris, though. It also includes a smattering of Conservative Party insiders like Leslie Noble and Lauren Mcdonald who have taken new lobbyist positions with private providers, while the new spokesperson for the Ministry of Health, Carly Luis, was just last summer a for-profit LTC lobbyist. Luis worked for the Ontario Long-Term Care Association (OLTCA), an infamous for-profit lobby group notorious for pushing against regulation and standards, while pushing to expand for-profit homes.

It should be no surprise, then, that a recent study determined that private homes were associated with more severe outbreaks (not to be confused with more outbreaks) and deaths. In fact, a Toronto Star analysis found that four times as many residents died in for-profit homes than in public homes.

Decent care is about decent work

An important perspective to consider is that the present system has, on a general level, meant worse conditions for workers — and worse care as a result. Many workers in for-profit LTCs earn low wages, have meagre benefits, work in poor conditions unsupported by management, and often piece together a living by holding multiple part-time jobs across various homes. In some cases, staff are temporary or belong to agencies that cycle them around the system. Workers reported a “punitive” work culture and high incidences of violence and aggression in a 2019 study by the Ontario Health Coalition.

Daly argues the issue of work is central to the quality of care residents receive. “Staff have to know residents,” she says. “A lot of residents have dementia. They can’t speak, perhaps, or they wouldn’t be able to communicate that they were getting the wrong sort of care. So continuity is really important. Good charts and good record-keeping is really important. That was another one of the things that was highlighted. And so when you have poor working conditions, you have a discontinuity of care and you make it more likely that things will go wrong, even in normal circumstances.”

The norm of part-time and temporary work — involving workers moving to and from different homes — was identified early on as a crucial way the virus was transmitted.

While the data has led some to rightly conclude that no disparity should exist between public and for-profit care, the idea can be taken further. Why should we have “for-profit healthcare” in the first place? Why not nationalize LTCs altogether?

Like dentistry, optometry, and pharmacare, long-term care’s exclusion from full coverage under the Canada Health Act seems arbitrary to many —even contradictory to the act itself. Ensuring all Canadians can age with dignity and care under world-class, universally-applied standards is a no-brainer extension of the logic that underpins the universal healthcare system currently in place. Why should long-term care be a separate concern for a system that believes in unencumbered access to hospitals, hosts of surgeries, and doctor’s appointments?

The logic of universal care is already codified in many of our systems; in fact it’s become a point of patriotic pride. Widening the scope of care — which a rich country like Canada can absolutely afford to do — will make our system more comprehensive, more decent, more fair.

Nationalizing LTCs will enable the public to take control of the stake they already have in providing decent standards for aging Canadians — away from the profit-making desires of shareholders. If implemented with ambition, a public system can address the myriad issues — bad work, corruption, secrecy, precarity, poor regulation, low standards, low staffing, and danger — with good government jobs, high-quality universal standards and enforcement, and insourcing to ensure decency across all areas of home care. Public ownership also means taking meaningful control over the entire system and out of the black box of private ownership, therefore giving the public the power to improve it, and do so with accountability and transparency.

The NDP, often lukewarm on nationalization, has already proposed a plan to advance this idea and take profit out of a system centred on care.

Doing this successfully will take more than just nationalization, of course — it will take active commitment to funding, and a fundamental break from austerity. This will require workers in the sector and across society actively pushing to reshape our healthcare system for the better. As the pandemic revealed, it is not enough for the system to simply be public. It should thrive. It should be beautiful.

Even in normal circumstances, aging is a central policy question — and an area in need of boldness. As with most issues in capitalist societies worldwide, the pandemic has laid long-existing problems bare. None of these issues are new. In fact, they have been sidestepped by successive governments for decades.

But will this need for action lead to doubling down on patchwork private sector solutions that are proven to fail? Or will it lead to a program that ensures dignity and decency for all who need it? As Ontario plans to take on the coming wave of baby boomer retirement and, whenever it comes, the next pandemic — socialists must work to ensure it’s the latter plan that prevails.