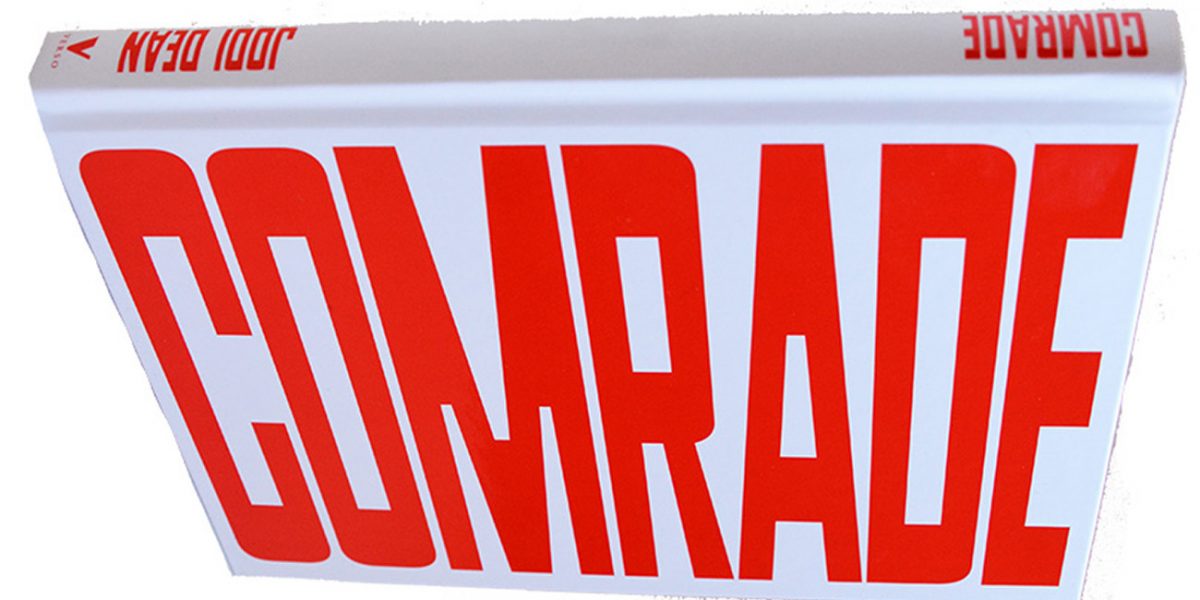 Comrades: An Essay on Political Belonging by Jodi Dean (Verso, 2019).

I’ll admit it: after ten years as an organized socialist, I’ve only recently warmed up to the term “comrade”. Previously, like many of you who are likely reading this, being addressed as comrade has often made me either cringe or laugh (or both).

But that’s because in a North American context, its usage tends to come across as either anachronistic or sarcastic, and it usually accompanies some fairly uninspired attempts at redbaiting. In short, it’s hard to hear the word comrade without simultaneously hearing a lot of other inherited cultural baggage.

In Comrade: An Essay on Political Belonging (Verso, 2019), American political theorist and communist Jodi Dean wants us to give comrade another try. Dean takes a closer look at the history and utopian promise of this word, and invites us to think about the type of relationships that we build, sustain, and require while fighting on “the same side of a political struggle.”

She makes the case that the figure of the comrade has something important to offer both the renewed socialist movement in the United States and the wider intellectual debates on the left that have taken place internationally in the aftermath of the movements of the squares, Occupy, and the rise of left-reformist governments.

I believe she’s right, and much of what she writes about comradeship will surely resonate with those who have experienced the full range of joy, heartache, frustration, and fulfillment that comes along with years of collective struggle to overthrow capitalism.

The figure of the comrade

Let’s first clear up what the comrade is not: Comrade is not an identity, and it is not something we can decide to be all on our own. It is not a replacement for citizen, brother or sister, activist, or militant, and it is not the same as being friends with someone in the same social movement or issue-based struggle.

Dean argues that the figure of the comrade “indexes a political relation, a set of expectations for action toward a common goal. It highlights the sameness of those on the same side—no matter their differences, comrades stand together.” Comradeship is, at its core, a form of “political belonging” for all of those who want to see “a world free of exploitation, oppression, and bigotry.” It is a “disciplined and disciplining” relationship for those working together to overthrow capitalism and build toward a communist future.

A comrade is someone with whom you have a set of shared expectations and principles, someone who holds you accountable in the course of your political work, and someone you can come to count on and trust. As Dean writes in one of her many memorable passages, “You don’t want to let down your comrades; you see the value of your work through their eyes, your new collective eyes.”

So does this mean that anyone can be a comrade? Sort of, yes — but not everyone. Dean emphasizes that the comrade is “a generic figure,” by which she means that “anyone but not everyone” can come to be in that type of relationship with others. It’s anchored in what you do, not in any unique individual characteristics that you might have. Comrades are those who “tie themselves together instrumentally, for a common purpose: If we want to win—and we have to win—we must act together.”

In insisting on the generic quality of the comrade, Dean preemptively challenges the assumption that comradeship may be inherently gendered (male) or racialized (white) by drawing on some examples from the history of the US Communist Party. Her argument isn’t that comradeship erases or papers over the profound conflict and forms of oppression that revolutionaries are socialized into, but that comrade “names an aspiration not always fulfilled but one that comrades can be expected to recognize, to strive for.”

“Comrade names a relation that exceeds sex and race and that carries with it the expectation that sexism and racism will be combated and abolished. Abstracting from identities produced through the system of patriarchal racial capitalism, comrade posits a political relation between those who have committed themselves to working together to bring this system down. Liberation from the given enables a new form of relation among equals on the same side of a struggle.”

To tie all of this together, there is another key element of her argument that I want to touch on briefly. In chapter three, “Four Theses on the Comrade,” Dean argues that this relationship between comrades is mediated by what she (following French philosopher Alain Badiou) calls a “fidelity to a truth”, and that this truth is embedded in practical work, and that this practical work is organized and disciplined by a revolutionary party.

That is, comradeship isn’t about political belonging in a social movement, shared expectations in an NGO, or the collective discipline of a trade union. It’s about being a committed member of a political party organizing around “emancipatory egalitarian politics” with the expectation to “engage in the struggles of the oppressed, organize for revolution, and maintain a certain unity in action”.

For those readers without a strong background in philosophy or critical theory, I want to stress that this book remains an accessible read despite the occasional challenging passage. There are scattered references throughout to figures such as Jacques Lacan, Alain Badiou, and Slavoj Zizek (and will certainly be of interest to those following the debates surrounding the “idea of communism”), but they are not a barrier to understanding the broader points she is making in each chapter.

The promise of comradeship

Part of the intervention that Dean is making with her book also has to do with the debate around the limits of the allyship model, but to do that aspect of her argument justice would require an entirely different review. Dean has published shorter articles on this aspect of her book elsewhere, as well as given talks that are available online, so I would encourage anyone interested in that debate to consider what she has to say about it.

The book ends with a chapter on what it means to experience a loss of comradeship, with an exploration of the different ways that we might cease to be comrades: expulsions, resignations, drifting away. In her discussion of expulsions, Dean provides a fascinating gloss on the 1931 trial in Harlem of Communist Party USA member August Yokinen, who was found guilty of upholding white supremacy by neglecting to take “a decisive stand for the defense of the right of the Negro workers” to attend a dance at a Finnish club in Harlem. I won’t recount the tale here, but the in-depth look at how seriously party members took their commitment to combating racism and holding comrades accountable to their duties as party members was instructive.

In the end, while Yokinen was found guilty, he was provided with a pathway for correcting his mistakes and re-joining the Party, all of which consisted in concrete activities he would have to do to advance the cause of black workers and combat white chauvinism.

For Dean, this shows that “Comrades will make mistakes, mistakes that violate party principles and damage the proletarian struggle, mistakes that must be condemned. But that does not have to mean that they be cut off forever. Workers’ justice and communist principles require that comrades be given a chance to return.”

Not everyone on the left will be convinced by the arguments presented in Comrade, as the book speaks primarily to those committed to “communism as the horizon of left politics” rather than social democracy or any looser form of anti-capitalism. If communism, the party, and revolution do not already form the basis of your political perspective, then this book may not change your mind. But it will still provide you with a compelling account of the type of political relationship that awaits you, should you one day see the value in the discipline, joy, enthusiasm and courage of comradeship.

Dean leaves the reader with no ambiguity regarding what is at stake in advancing the figure of the comrade, and why she believes that it is an important relation for us take up today: “The problems facing the world can only be addressed through communism, as comrades — the class struggle today is the fight for a future.”