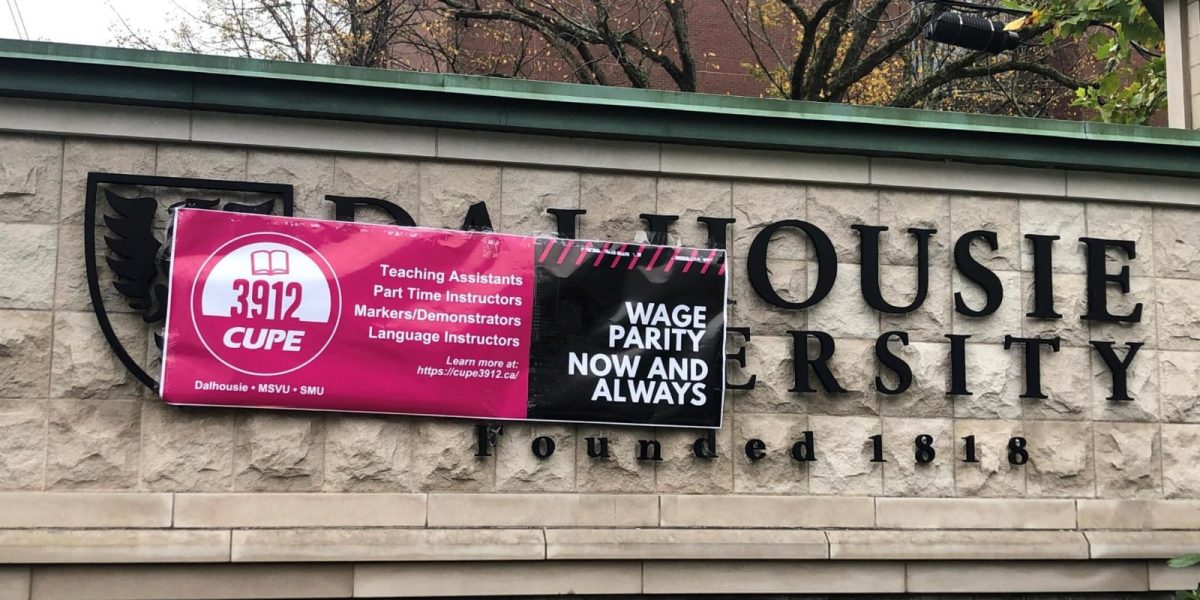 After being on strike for over three weeks, members of Canadian Union of Public Employees (CUPE) Local 3912 have returned to work at Dalhousie University. Contract faculty, teaching assistants (TAs), markers, and demonstrators fought for and won significant wage increases across the board.

Ellie Weise is a PhD Candidate in the Biology Department at Dal. They work as a TA and have had leading roles in the union and their strike. Spring Magazine spoke to Weise about CUPE 3912’s historic fight for fair wages and working conditions.

Can you tell us about the CUPE 3912 strike and what you achieved?

I think the CUPE 3912 strike is a fantastic example of truly collective action and achievement. Planning and executing this strike had so many moving pieces and problems to solve, from forming transparent and effective two-way communication between members and elected members, to picketing strategies that span a large campus, to getting strike pay to hundreds of people. Additionally, all of our negotiating demands and offers were based on member input using surveys and multitudes of conversations between the negotiating committee and members. And on top of all of that, about 1500 people withheld their labour and hundreds joined the picket line rain or shine for over three weeks. This strike was an incredible achievement that took all of us working together to fight for better pay and working conditions, and I feel so lucky to have been a small part of it.

When it comes to the collective agreement itself, we made large gains in our wages and progress towards our workplace protection goals. The gains in our wages for this single collective agreement is the same as the gains we have made in the last 15 years. This jump is entirely the product of the collective mobilisation and striking efforts. However, this deal is not perfect. We are still underpaid compared to our U15 counterparts, there are contract concerns like duty creep between TAs, Demonstrators and Markers that have not been fully addressed. I consider this new collective agreement an important first step to build upon in the next few years using other tools of the union until our next bargaining cycle in 2024.

What kinds of roles have you had in planning and executing this strike, and what has it all been like for you?

I was a member at large on the negotiating committee and a member of our social media team, which was under the communications umbrella of the strike committee. My job on the negotiating team was to talk to as many people as I could through surveys and in-person conversations to help come up with our offers and responses at the table to get the deal our members wanted. Our social media team ended up doing a variety of tasks. All of the poster designs, infographics, and social media posts for the strike were from our team in conjunction with the communications strike committee coordinators. I seriously cannot speak highly enough of my colleagues on both committees, they’re all amazing and did so much incredible work to make this strike successful.

This has been an intense but amazing experience for me. I have learned so much during this collective bargaining process. I experienced bargaining meetings for the first time and learned how to negotiate a collective agreement. I got to learn graphic design techniques and new writing strategies to communicate our messages. And I experienced a successful strike campaign for the first time. As someone who just moved to Canada last year, getting to experience how unions function here and do this work was such an empowering experience. A lot of Canadian striking and union activities would be restricted or illegal back home for education workers due to union-busting legislation. These bargaining strategies are effective and we were able to make real improvements in our workplace at Dalhousie due to our freedom to organize and strike.

You said that collective mobilisation and striking efforts led to members gaining as much in this one bargaining cycle as they have in the last 15 years, but it seems like the issues that the strike focused on are not new. What kinds of changes and strategic debates had to happen for members to take action so effectively?

I think low wages and duty creep are nearly universal long-term issues for workers, and Dalhousie is not an exception. So I think a lot of people are frustrated by the way we’re treated as education workers, and want a way to express that and work to make things better. Our strategy was essentially to talk to our members and then turn those concerns that were identified into messaging to bring more people in. That’s really the engine of an effective union, the loop of information between members identifying problems in the workplace and committees who work to publicize and pressure the employer to fix those problems using the tools of the union. We as a collective care about our university and members were ready to take action to get meaningful reforms passed in this collective agreement. All that was really needed was a framework to mobilize in so we could effectively pressure the university to make these changes, and that’s where our strike preparations came in.

Right after the strike ended, Dal announced that Deep Saini will be leaving his role as the university president at the end of this year to become the Principal and Vice-Chancellor of McGill University. What do you think about this?

The day before Dr. Saini announced his departure, he shared sentiments in an email regarding our new collective agreement that he wanted to work to support us better in the future. As he transitions away from Dalhousie, I encourage the remaining administration and the new interim president to maintain that attitude of being open to reform and feedback as we proceed through this next collective agreement. I wish Dr. Saini the best as he transitions to McGill, and to encourage him to take this spirit of cooperation with him as he starts his work there.

At Dalhousie, we need to consider what we want our future to look like. We have a lot to be proud of as a community, but we have a long way to go to become the university I think we could be. As the new interim president and I are both education workers, I hope we share a vision of the university where everyone who works and studies here feels supported and valued. Dalhousie is not a business, it’s a school, and I hope that in the university’s future there are reforms to work towards the shared goal of a school we can all be proud of.

You consider this new collective agreement to be a first step toward the next bargaining cycle in 2024. What kinds of changes do you want to see then, and what are the next steps to make that happen?

While I think this new collective agreement contains meaningful wage increases and some steps towards workplace reform, there are a lot of things that still need to change. I have my own personal list of what I want to see improved in the workplace, and I’m sure every single member of our union has a list too. So to me, the first step for a union under a new collective agreement is to reach out to all members to identify priority problems for our collective. To do that, we’ll need to set up a framework for consistent check-ins across departments and contract types for returning members and introductions for new members. That will help the union stay on top of any new issues that may pop up over the next few years and monitor potential progression of previously identified problems. We can then increase pressure where it’s needed on the administration through public communication and solidarity pushes, member support initiatives, and grievances.

I would like to see our union setting up a continuous version of the member feedback and mobilization strategy that made us successful over the last few months. That will give us more power to make changes to the collective agreement in the next round of bargaining and ensure that we’re making the reforms our membership wants to see. If we can build on our current agreement together over the next few years, I think we’ll be able to make some remarkable changes to our workplace.