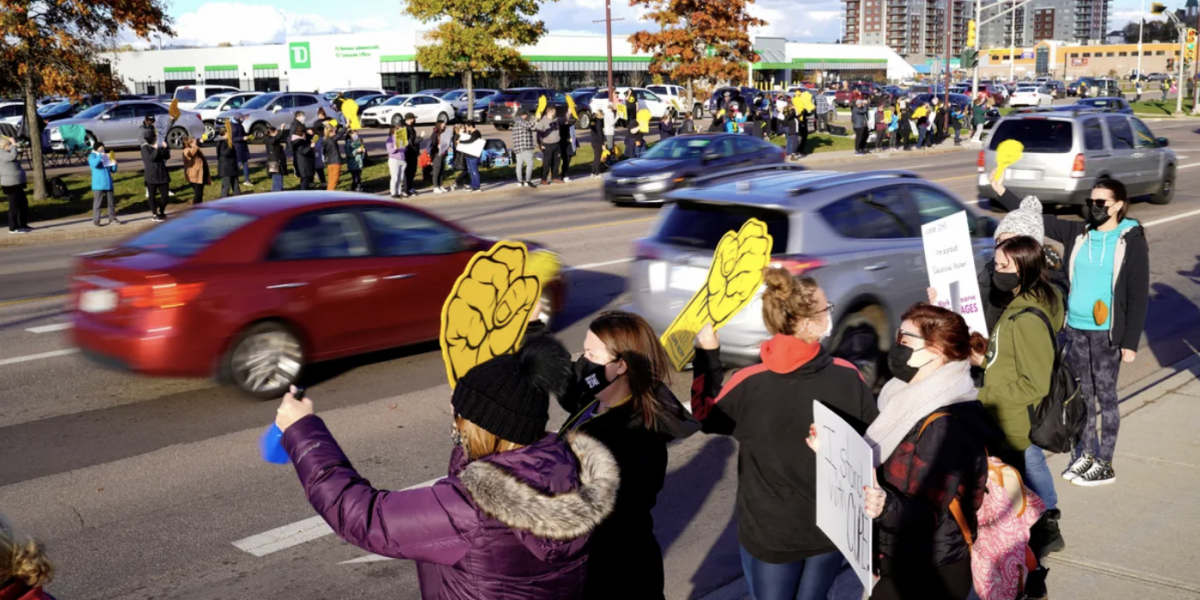 In the fall of 2021, thousands of public sector workers in New Brunswick, unionized with CUPE, went on strike demanding an increase in pay and fair treatment. They took on Blaine Higgs’ Conservative government and won.

Ten of the eleven CUPE locals have reached an agreement with the Torie government in NB. Some agreements led to full time workers accepting a wage package that features a 2% a year raise over 5 years, plus a 25 cent an hour increase for each of those years. In addition, casual workers who will receive 100% of their salary as per the agreement who used to receive reduced wages.

Although the win is a cause for celebration, the wage and contract amendments for workers are not absolute. Workers didn’t win all their demands. There will come a time where workers will need to once again fight for better compensation and treatment. The New Brunswick strike contains valuable lessons for workers in the province and across Canada about how to organize effectively and what is possible when workers are united.

The first lesson from the strike is that strategic and patient organizing is key to sustain a strike. These wins were not possible without a long-term organizing strategy. The strike was years in the making with organizers and locals coming together to buy into and implment a strategy to fight for higher wages. The build up to the strike consisted of thousands of conversations, actions, and meetings over the last number of years that created a strong solid basis for CUPE strikers to push forward and solidify their demands. The workers were organized, prepared and committed. The union locals involved were united in a common strategy and coordinated their efforts.

Additionally, this strike received immense public support which was the product of unions and their membership winning over their communities to their demands well in advance of the actual strike. Friends, family and coworkers were a united front and a visible front that propelled the movement forward and sustained the support.

Conservatives can be beaten

The second lesson is that Conservative governments are not are not immovable. It is possible through systematic organizing in the workplace and winning popular opinion to force Conservative governments to make substantive concessions. During the strike Higgs’ Conservative government threatened striking workers with a legal hammer. At a key moment in this strike Higgs openly threatened to use back-to-work legislation to end the strike in late October. However, Higgs ability to do this on a wide scale was limited by the wide popular support for the strikers in the province. Higgs tired and failed to make the argument that strikers were hurting public services. Higgs’ popular sank like a stone during the strike, his Conservatives polled at under 20% and his unfavorability ratings rose to 67%. Over 80% of New Brunswickers supported the striking CUPE workers’ demands.

The third lesson is that fighting for higher wages in the public sector is not impossible. Decades of austerity have lowered the horizons of what many think is possible to fight for in the public sector. For years demanding significantly higher wages for public sector workers was a third rail in union bargaining. This strike shows that it is not only possible, but that if done right can help illuminate the deep class divide in society. The New Brunswick strike helped bring to the fore growing inequality in the province. Higgs has no problem giving the Irving oligarchy genourous subsidies and tax breaks, but is willing to use the full force of the law to resist increased wages for healthcare workers and bus drivers.

It was not a coincidence that just a couple of weeks after the successful strike by CUPE for higher wages the Higgs government announced a $2 increase in 2022 to the minimum wage, a 17% increase. Striking CUPE workers had not only made demanding higher wages popular, they had made them possible. Higgs’ government was forced to raise the minimum wage in order to start rebuilding its much reduced base of support.

The New Brunswick public sector strike shows what is possible when workers are organized, strategic and determined. The successful CUPE strike in New Brunswick was not luck or a given, it was the product of workers engaging in a determined campaign to fight for what they need and deserve. When workers advance their interest at the bargaining table or win legislative victories we must remember they are not permanent. The battle for interpreting how victories were won and the enforcement of what was won start the moment victory is at hand. As well, a rapidly changing political terrain and an ever shifting balance of class forces will mean that hard fought for gains can easily come under attack.

This is why it is so important that we remember our power as workers. New Brunswick public sectors workers have much to teach us about taking on a hostile Conservative government and winning.