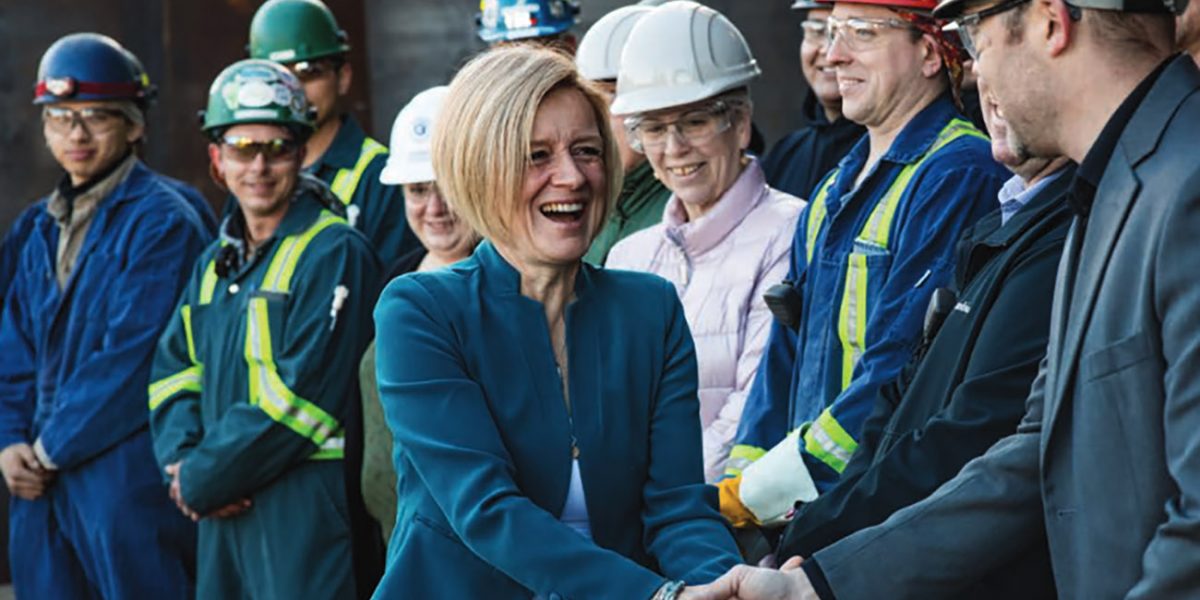 The reaction from the green left has been marred by references to Alberta “knuckle-draggers” who voted for Kenney, like the reaction to Trumps’ victory. But in this case the historically high voter turnout of 70% will lend greater credence to stereotypes of workers in the tar sands. The NDP did manage to win 32% of the popular vote (although this was concentrated in urban centres), which is still by far their second best showing historically, and the gap between the two parties closed significantly over the course of the campaign—in reaction to UCP candidates airing their racist, sexist, homophobic and transphobic ideas. The high voter turnout can be read as voters turning out to turf the NDP but it can also be read as voters turning out to try to stop Kenney, given the UCP dropped so much in polling over the course of the campaign.

But saying the NDP was just being punished for a crisis they didn’t create gets it backward: it’s precisely when you have an economic crisis that the left in power has a chance to show that it can respond by actually doing something to help ordinary working class people.

Faced with a bust in the Alberta tar sands, Notley did exactly what every social democratic government does when capitalism is in crisis: try to nurse it back to health in order to be able to deliver reforms, instead of placing the burden of the crisis on those who profited most from the boom. This is not to ignore what Notley did for working class people within the limits of the push to restore profitability: raising the minimum wage and modernizing Alberta’s labour laws were important gains for workers, but they were outweighed by the failure to address the needs of 100,000 laid off workers and the austerity the royalty cuts forced them to pursue. And because Notley’s minimum wage reforms weren’t backed by a movement from below, there was little to push back against Kenney from cutting the minimum wage for young workers.

Kenney’s UCP was exposed to be utterly grotesque during the election campaign and the NDP did close the gap considerably within the UCP in the polls in the weeks preceding the vote because of this, particularly in urban centers. But Notley had nothing to match Kenney’s promise to bring back the boom, because her claims had already proven empty. Her strategy simply didn’t work: the jobs didn’t come back, despite more than a full recovery in oil production, and Kenney was able to point the blame (rightly or wrongly) at NDP carbon taxes and the deeply discredited Liberal party nationally.

The NDP should have raised royalties and raised taxes on the oil industry, to pay for creating jobs and expanding services through a green transition. Instead, they tried to prop up the oil industry with royalty cuts and an “Alberta Climate Leadership Plan” (ACLP) that was aimed at expanding oil production rather than building a green economy. Its focus was carbon efficiency, ie more barrels of oil with fewer emissions during the extraction/upgrading process. But instead of helping oil workers by creating jobs, the plan actually helped the oil industry eliminate jobs.

For example, self-driving trucks reduce emissions but they also throw people out of work. Companies that increase efficiency are rewarded on a per barrel basis with revenues from the carbon tax (accounting for half or more of those revenues). Smaller companies that don’t have the funds to invest in new technologies and those with rights to deposit with higher associated emissions during extraction are effectively paying for greater efficiencies at their competitors. So we’ve seen not just new technologies that cut emissions and labour, but also consolidation, which also leads to job losses. Much of this is the result of shifting investment in the fossil fuel industry with the low price environment for oil, but the ACLP only helps it along. That is why those jobs never returned despite the fact that oil production has more than recovered: fewer companies are now producing more oil with fewer workers, using more advanced technology and operating at larger scales of production.

One key point here is that a significant section of the oil industry supports the ACLP strategy. Kenney is likely to encounter significant opposition from them to dismantling the core components of the ACLP. Because they believe it will help the industry survive the downturns by lowering operating costs, while simultaneously helping overcome opposition to Alberta’s “dirty” oil and making it easier to get the product to tidewater where they can gain increased demand for their product and therefore a better price—even if most of the oil continues to flow south rather than to Asia.

Oil profits and the state

One narrative that has been emphasized around the Alberta election is that nobody can bring back to the boom to the oil industry. This is the salve on the wound as we see the right winning election after election, and no doubt it will be applied ever more liberally (pun intended) as we approach the federal election. The underlying message is that even if we lose, we’ll still win. On one level it is certainly correct that no government can make the market do what it wants. But it would be a mistake to thin that we’ll never see a boom again in the tar sands. More importantly, it would be a mistake to think that the oil industry—in Alberta or globally—will ever be allowed to die a natural death at the hands of the market.

The kind of fatalistic arguments that have prevailed since the 2014 price collapse, that claim that fossil fuels are a sunset industry while talking about stranded assets, that the economic advantage for renewables are undeniable and in 10 or 20 years everyone will be driving electric vehicles and so forth—are all based on the false premise that fossil fuels dominate because they are so profitable for the oil industry.

This is wrong. They dominate because they are profitable for the capitalist system as a whole and are so essential for making war. Fossil fuel companies are profitable for this reason, not in spite of what the rest of the capitalist class wants. Trudeau didn’t just say Canada would not leave billions of dollars of oil in the ground, he said that no country would—and he was correct, at least no capitalist government would willingly leave oil the ground, not without mass pressure from below. There is an appeal to stating that the death of fossil fuels is inevitable, because it seems to lend weight to our cause, as though we can’t lose. But the reality is that we can lose and the market can continue to base itself on fossil fuels, and that is the road we are still on.

The last several years have shown that the state will not willingly abandon fossil fuels. It will subsidize them until every last drop is extracted. Whether that’s by buying and building pipelines, cutting royalties, cutting taxes, cutting regulations, it will do whatever it takes to keep the industry going. They are driven by competition both between individual companies, and between nation states, and fossil fuels are the ultimate competitive advantage. Failure to recognize that means failing to recognize the task that lies before us, which is not just to mobilize to end the fossil fuel industry but to mobilize to end the demand for fossil fuels that creates it in the first place. The view that fossil fuel companies have corrupted the political and regulatory systems and that we just need to elected the right party, not aligned with the interests of fossil fuel companies, is what informs much of the existing climate justice movement—and the growth of support for the Green Party, despite their inability to offer an alternative.

Supporting carbon taxes is a mistake and this election shows just how effective opposing them has been for the right. Conservatives are correct when they state that working class people shouldn’t be made to pay for a climate crisis they didn’t create. Of course they’re wrong when they claim that carbon taxes hurt the oil industry, and they have no better plan to address the climate crisis—in part because so many of them deny that it’s even a crisis.

Making workers pay for the crisis, rather than organizing the working class to make the 1% pay, undermines any basis we might have for building a mass climate justice movement with the potential to bring about systemic change. If workers don’t feel confident to fight austerity, they won’t just fail to act on climate change, they will actively oppose any move to do so that doesn’t involve addressing the crisis they are living through. As the rate of profit declines and the crisis deepens, any market-based solutions to climate change will mean more austerity, not less, and workers will oppose them and any movement that supports them will be creating a vacuum that the far right can try to fill. Without a clear alternative to the market, workers will look to solutions within the system and be trapped in the very limited debate between what we’re seeing between Notley and Kenney, Trudeau and the right wing premiers.

We need to connect the fight against austerity and inequality with the fight against climate change. The working class will fight for its most immediate needs, ie it will fight austerity first. I mean here a real fight: not periodic demonstrations to end fossil fuel extraction, but sustained campaigns with roots in working class communities and organizations that fight for expanded transit services, affordable housing, green energy, etc, that workers feel are winnable and worth fighting for because they lead to immediate improvements in their own lives and not just warding off a nebulous threat. Building up our numbers and expanding our influence in these kinds of movements can lay the basis for relating to and being able to shape the climate justice movement.