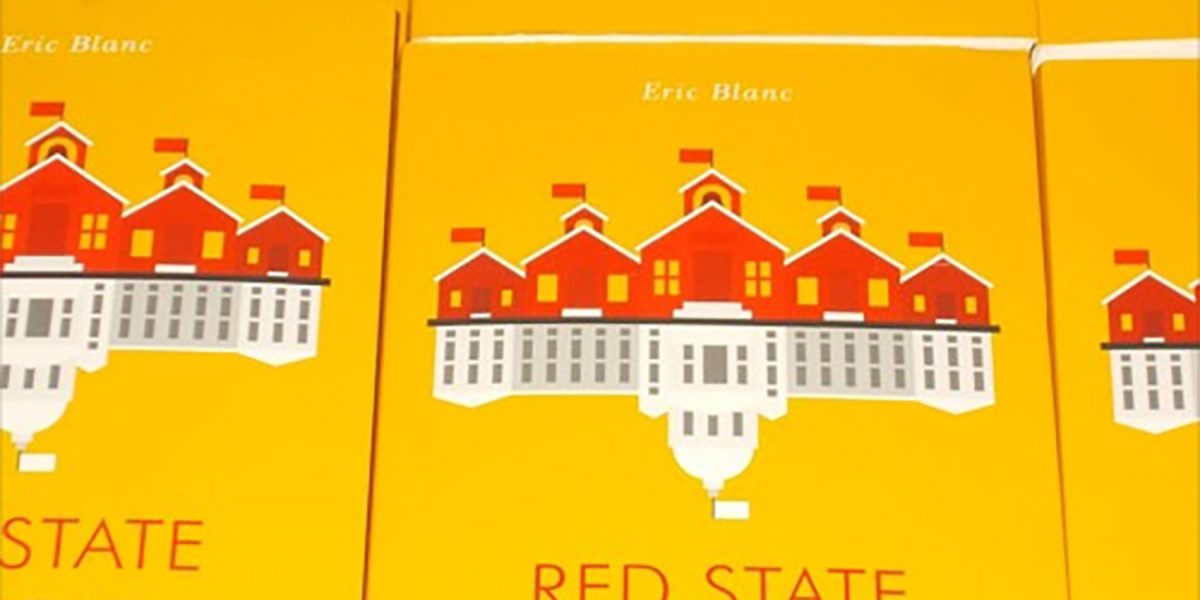 The ruling class is threatened by the power of strikes because they are effective, and 2018 saw waves of strikes around the world that proved the timeless axiom that workers united will never be defeated. Eric Blanc’s Red State Revolt: The Teachers’ Strike Wave and Working-Class Politics, focuses on the three “right to work” states of Oklahoma, West Virginia, and Alabama, and encapsulates the excitement, nervous energy, and effervescent vitality of teachers and support staff in their historic victories against the elite in their state.

Blanc captures the genesis of these strikes by providing the reader with specific socio-political contexts for Oklahoma, West Virginia, and Alabama, whilst weaving these actions into a narrative with first-hand accounts and quotations directly from the teachers, support staff, politicians, and organizers involved. He uses interviews, quotations, and Facebook posts to give the reader a direct line to the pulse of these strikes, and also moves into analysis on the most important lessons learned from the success of the strikes for socialists and organizers alike. This book is divided up into three parts, aptly titled “The Roots of Revolt,” “The Power of Strikes,” and “The Militant Minority”, and the common thread through all chapters is how revolutionary and life changing these strike actions were.

After dispelling the oversimplified myth of the United States as “red versus blue”, Blanc explains the devastating working conditions for teachers and students in the public education system, and how all teachers, regardless of their politics, were called to action. For example, many districts in Arizona and Oklahoma had been forced to reduce their school week to four days due to funding cuts, and many arts, language, and sports programs had been eliminated as well. Many schools had out of date textbooks that are in scarce supply, as well as swarms of rodents, defunct desks, caved in and crumbling ceilings, and a shortage of chairs for students, all of which had become normalized conditions for schools. Despite the fact that many teachers in the states work more than one job to pay their bills and are grossly underpaid for their work, these strikes were not focused on increasing teacher salary; the core of these strikes was about improving the quality of education and conditions for current and future students, to which their education in a safe and healthy environment should be a guaranteed human right.

With the overwhelmingly demoralizing state of public education, the strikes were inevitable in many ways and the question should not be why they happened, but why they not happen sooner. Socialists, organizers, agitators, and all public sector employees can learn a lot from the way Blanc breaks down these strikes for the reader. A few critical takeaways include:

1. Organized strikes win and are workers’ most powerful yet most underutilized weapon.

Well planned and strong public sector strikes get results. The paralysis of production is the ultimate tool for fighting back against the ruling class and getting demands met, and the elite are desperate to downplay the effectiveness of strikes to prevent them from happening. When there are mass mobilizations for a strike, even if it is an illegal strike, the ruling class has difficulty punishing workers and enforcing their arbitrary rules.

2. Labour unity and creating a sense of community among workers is essential for fighting for better working conditions including striking.

Of course building unity makes the sharing of information easier, but it also helps to dispel feelings of isolation and powerlessness and thus empower more workers to get involved in their fight. Workplaces should have methods of organizing and activating workers, ideally in a union, or in some type of space where the bosses are not present and the workers may speak and organize freely.

3. Social networks like Facebook are effective in organizing workers, and in the absence of a union can be a great tool to spread information; however, social networking sites have their limitations and cannot be the sole organizing tool of the working class.

In all cases, the use of Facebook alone was not enough to spread class consciousness nor create the conditions for a strike. Instead, digital networks must be utilized in conjunction with on the ground organizing and activating, in person conversation/solidarity building, and in the streets activism.

4. These massive strike victories started with small actions to build solidarity, and then escalated from there.

For example, it was the West Virginia Public Employees United that organized the first statewide “Red for Ed” day, where educators at hundreds of schools wore red to protest and shared their photos to their teacher Facebook pages. This tiny action later spread to Arizona, then across the nation, and then around the world to become the powerful #RedForEd movement that we know today.

5. While the Oklahoma, West Virginia, and Arizona strikes are referred to as the “teacher strikes”, it was not solely the teachers who were on strike; in fact, West Virginia and Arizona’s successes were intensely bolstered by their ability to involve and be assisted by all school support staff—including bus drivers, school sanitation workers, secretaries, cafeteria workers, paraprofessionals, and more.

The unanimity of the support staff on the front lines helped to deliver the victories, which speaks again to the importance of workplace unity and fighting for the rights of all workers.

6. Organizers recruited at least one teacher from every school in their state to act as a “school liaison” so that the movement had a direct line of communication into each school, and this proved to be crucial in spreading correct dates and information.

The tactic of having a liaison between networks helps ensure the flow of accurate information into every nook and corner of the movement, contributing further to an unwavering, united movement needed to strike back.

7. The working class should be united in struggle, not divided by electoral politics

The Republican and Democratic parties have proven that time and time again, they vote against investing in education, and vote in favour of the wealthy and corporate interests. The strikes were won by involving Republican Trump supporters, life-long Democrats, and also independents and socialists by bringing the messaging back to the issues and making the focus the well-being of the students, school, and staff. While many participants are walking away from these strikes with a newfound understanding of socialist politics and organizing, the united movement of workers is comprised of those from all areas of the political spectrum.

8. There is a common misconception that these strikes were leaderless, sudden, and spontaneous, but the truth is that worker organization took many months and years to organize. Additionally, the strikes were only possible due to a militant core of teachers in each state that helped drive the strikes to action.

For example, the unions were not always in favour of the strikes, and it was due to intervention from a key group of workers that helped organize teachers and support staff to push their unions into action. This pressure and intervention helped change the dominant discourse in unions to ultimately support their workers in the strikes. Interestingly enough, this core group of activists throughout each state had been activated through many movements such as involvement in the Bernie Sanders’ campaign, the 2012 Chicago teachers strike, and more. It is clear that a small group of individuals with an understanding of organizing and willingness to push their unions are key to driving these movements forward to victory.

Even if you are not a teacher, public employee, or a socialist, this book will provide you with an understanding of the challenges that organizers face on a large scale, and the conditions needed to pull off successful strikes and actions. Blanc provides an easy to read account of these strikes, and hopefully this book will encourage more workers to see that they do have the power, and that well planned and strongly supported actions can get results.

These accounts of workers winning are reminiscent of the last lines of the Communist Manifesto, where Marx and Engels declare that “the proletarians have nothing to lose but their chains. They have a world to win.” This is truly the ethos of Red State Revolt: we need to fight for the world we want to win, and trust that winning is possible.

This book is a collaboration between Verso Books and Jacobin magazine, and is available everywhere now.