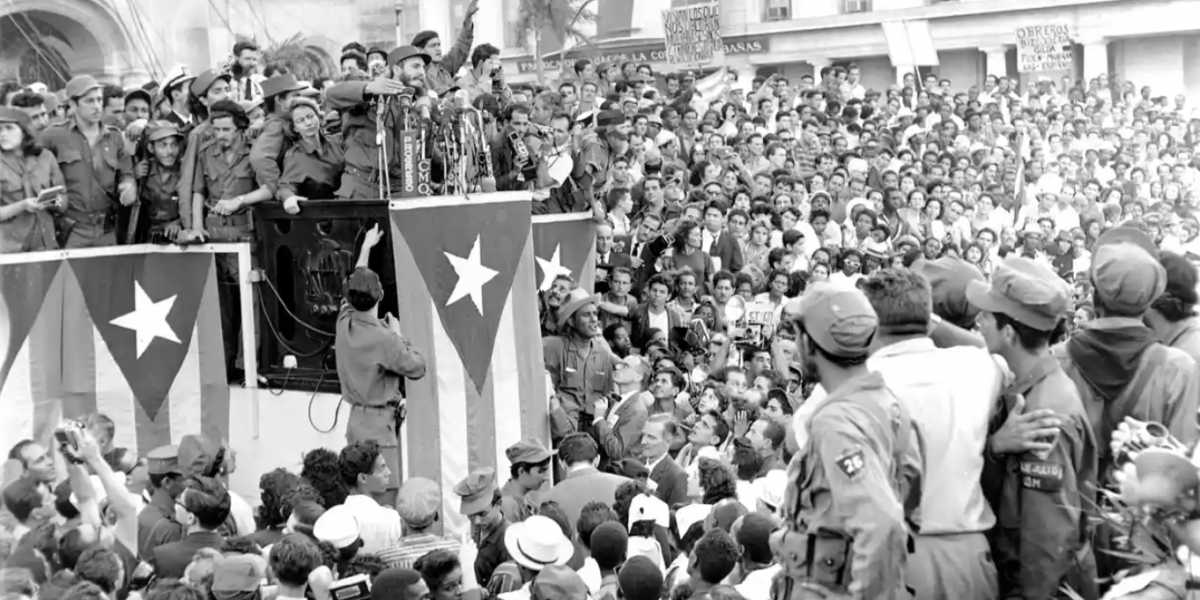 Latin America holds a special place in the political imagination of socialists throughout the world. Colonialism and imperialism have deeply gouged into the veins of the continent, enslaving and exploiting its people and resources. However, its history is rich with struggle. From slave rebellions to socialist revolutions, the continent has been a source of inspiration as well as debate for activists around the world.

Permanent Revolution in Latin America is an attempt by Jorge Martín and John Roberts to provide history, context and analysis of three historic case studies of revolution: Cuba, Nicaragua and Venezuela. These revolutions are often cited by the right-wing as examples of socialism run amok, but the authors try to make the case that the real problem was too little socialism.

The premise of the books rests on the theory of permanent revolution. Central to the theory is that for workers, farmers and oppressed people to win basic democratic demands in poorer nations there needs to be a worker-led social revolution that abolishes capitalist property relations and goes beyond its own borders, linking up with other places resisting imperialism. This doesn’t mean that there can be no progress outside total revolutions, as the book catalogues well the incredible achievements of the revolutionary transformations of Cuba, Nicaragua and Venezuela. However, it does mean those gains will be perpetually under threat and rolled back by the contradictions and encroachment of capitalism.

Martín and Roberts contrast the theory of permanent revolution with the “stagist” theory of history popular with Communist Parties around the world throughout the 20th Century. The introduction describes the “theory of stages” like this: “the task of the Communist Parties is to enable the national bourgeoisie to take power in a revolution against imperialism…in practice the theory of stages restricted the actions of the workers and peasants to what was acceptable to the national bourgeoisie.”

They argue that the theory of stages has been a “fatal trap” for revolutions in the global south and they apply this lens to Cuba, Nicaragua and Venezuela. While this is the crux of the 400-plus page book, the books remains well worth the read for the incredible stories of the creativity and resistance of the masses, the rich detail and historical context the authors bring to these struggles.

“The Cuban Revolution of 1959 overthrew capitalist relations, blacked the eye of American imperialism and established the only workers’ state in the Western hemisphere. This revolution was entirely novel in that it was led throughout by a group that considered itself radical bourgeois democrats. What was not new, and had to be re-discovered yet again, was that the demands for national independence, the liberation of the Cuban people, social inequality, and a better life could not be realised in a capitalist Cuba subject to imperialist domination. To achieve these goals, it would be necessary for the Cuban Revolution to take the first steps towards socialism and create a workers’ state.”

The Cuban leadership pushed forward with demands popular with the masses of Cuban people “even if it meant rupture with US imperialism.” Fidel Castro and others key to the 1959 revolution pursued alternative trade relationships. At home, the revolutionary government armed local militias and revolutionary defence committees, gaining vitality from mass mobilizations in defense of its policies, and took control of the country’s banking systems and nationalized key industries. These bold stances and policies reduced the wealth gap, and made incredible leaps in education, healthcare, agriculture and infrastructure. The revolutionary internationalism of the Cuban Revolution also played a huge part in fighting racist, colonial regimes in Africa. One of the few negative aspects of the Cuban Revolution that Martín and Roberts point out is the lack of direct workers democracy.

Their analysis leads them to believe that much of the problems that the Cuban Revolution would eventually face would stem from a lack of mass workers’ participation in the direction of the politics of the country. “After the revolutionary victory, the leadership had huge authority and widespread support. However, there were no mechanisms of revolutionary democracy through which ideas could be debated and discussed and, above all, through which the masses of workers and peasants could exercise their own power and hold their leaders to account.”

This tendency came to be exaggerated through the more difficult economic times in the following decades and led to the adoption of policies that hurt workers working conditions and living standards and took steps toward the restoration of capitalism. Martín and Roberts contend that more popular workers’ democracy could have pushed back against these changes and been the best defense against the relentless US capitalist pressure.

In Nicaragua in 1979, an insurrection involving all sections of the population threw out the Somoza dictatorship. It was an enormous outpouring of democracy and was seen as offsetting the defeat of the Chilean government in 1973 and the 1976 coup in Argentina. The revolution inspired workers around the world and led to huge gains for the people of Nicaragua in healthcare, education, food production, economic and gender equality and public services. However, only a decade later a reactionary government came to power, what went wrong?

For Martín and Roberts the answer lies in the unfinished nature of the revolution and the degree to which the political leaders of the revolution (the Sandinista National Liberation Front or FSLN) looked for collaboration with capitalists in the country.

In January 1979, following the murder of a journalist by the Samoza regime, there was an explosion of popular protest, trade unions in Nicaragua called a general strike (successfully shutting down 80% of businesses across several provinces), Samoza’s businesses were burned to the ground, residents of villages armed themselves and fought back the national guard. The FSLN was mostly concentrated on guerilla actions in the countryside, but because it was seen as the most organized political expression of resistance to the regime, they were cast to the front of the movement and lead the junta of national reconstruction.

The Nicaraguan revolution faced severe challenges. The economy was intentionally sabotaged by the capitalist class who feared any challenge to their power. The US-funded and trained right wing militias, known as the Contras to foment violence and chaos.. The objective conditions the revolution faced were tremendous.

The point that Martín and Roberts try to make is that the FSLN made their job harder by pandering to the national bourgeoisie to try and win their support. The Sandinistas pushed the idea that a mixed economy was necessary which left them open to further sabotage by the capitalist class and demoralized and demobilized the workers and peasants who made the revolution. The Nicaraguan oligarchs could try and use food shortages and inflation to fuel a crisis of production. Instead of taking steps towards a planned economy and nationalization, the government made concessions to business owners and tried to suppress strikes and worker self activity.

The Nicaraguan revolution achieved many noteworthy and heroic anti-imperialist goals and transformed conditions for the masses compared to the Samoza dictatorship. But ultimately it was hamstrung by both the  opposition of the national and international bourgeois, but also by its own policies, leaving it more vulnerable to attack.

For two decades, Venezuela has been at the forefront of the struggle against capitalism and US imperialism. It has faced incredible challenges and opposition from international capitalism, while representing a symbol of opposition for socialists around the world. While recognizing the incredible creativity and bravery of Hugo Chavez and the masses of workers and peasants in Venezuela, the authors share a near identical analysis as was applied to Nicaragua. For Martín and Roberts, the Venezuelan revolution suffered by not going all the way in nationalizing key industries under central socialist planning.

Like the other leaders in this book, Hugo Chavez faced strong intervention from US imperialism and its Central Intelligence Agency (CIA), coup attempts, and bosses’ strikes from the country’s oligarchs. Chavez’s government faced a war of attrition and economic sabotage from the upper classes designed to make the people of Venezuela’s lives more miserable in an attempt to unseat Chavez. In response, the workers of Venezuela organized themselves and fought back. They created democratic unions to counter the fake company unions and occupied factories to force production to resume and demand unpaid wages. Neighbourhood committees organized to distribute food and provide aid to community members, while fighting tooth and nail against vicious anti-Chavez mobs from the middle classes.

However, there were contradictions within the Venezuelan government that undermined the move towards more socialist action, blunting the struggle for workers’ control of the economy. In the final chapter of the book the authors note: “the course of the struggle for workers’ control highlighted the important characteristics of the Bolivarian Revolution. In particular, the on-going, and growing, internal contradiction between the bureaucracy and their reformist and reactionary allies and the more radical chavistas committed to a deeper process of revolutionary change.”

For the authors, the task for revolutionaries in Venezuela is clear: working with others in the Chavista tradition to develop a revolutionary leadership with a clear socialist program. Martín and Roberts believe this is the key factor to be able to overcome the oligarchy, imperialism, as well as the reformists and bureaucrats that have stalled the revolutionary process in Venezuela.

Permanent Revolution in Latin America is a valuable book for a number of reasons; Martín and Roberts provide a useful history of these three countries, while also offering context and sharp analysis into the politics of the respective revolutions. Importantly, the authors seem to always lead with solidarity. The book is filled with admiration for these struggles and recognition of the tough choices faced by their leaders. Martín and Roberts don’t write anyone off or wallow in despair. Rather, they try their best to advocate for possible steps forward that could hand more power to workers, help defend against US imperialism and build economies that work for the working class, while inspiring others around the world to struggle to win.