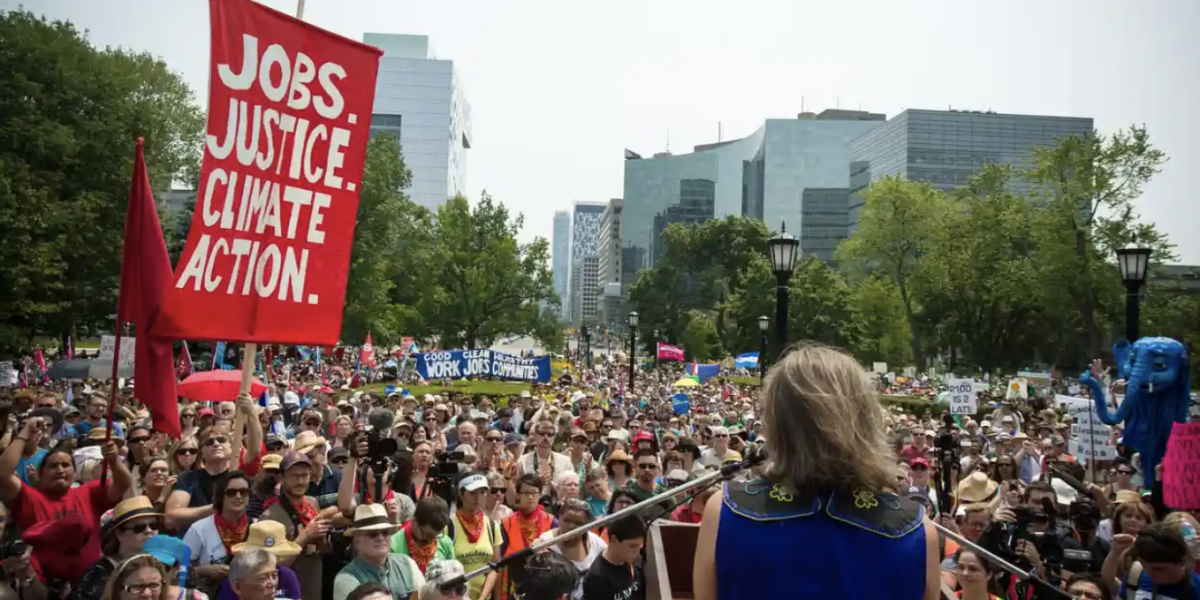 While the continued colonization and degradation of the environment harms racialized, poor, and working class communities the most, it is worth noting how much power the global working class has to change the trajectory. By empowering workers, we can create a world where the exploitation of people and the environment is not the backbone of our social or economic system.

Throughout history and modern day, the violent dispossession of Indigenous peoples from the land they steward has been a requirement of doing business under our capitalist and white supremacist system. Stolen land is bought and sold to build businesses and extract resources. Ongoing colonization and exploitation of the land is producing increasing climate chaos that threatens the future viability of life on the planet.

This exploitation of the land is fueled by the exploitation of labour. Workers are hired to do jobs with little protection, poor wages, no paid sick days, and–for many migrant workers–lack of status and fear of deportation. The commodification of housing means many workers cannot afford to live in the communities where they work. The status quo is cemented by aggressive union-busting tactics and lack of worker-centered legislation, which silences workers and prevents them from converting their workplaces into environmentally sustainable democracies.

But if there is anything that the pandemic has highlighted, it is that all of capitalism’s wealth comes from workers. In a capitalist system, it is often believed that if there is to be positive change–for workers, the environment, and others–it is to come from the top down. As workers and socialists, we know that this is not true. We are aware of the power built from strikes, unions, co-operatives, and solidarity. Workers have tremendous power if they act collectively, but how can worker empowerment lead to better environmental outcomes?

For workers in high carbon industries, democratizing the workplace would support workers who are against harmful practises such as wasteful dumping of chemical runoff, fishery trawling, logging sensitive areas, etc. Workers in extractive industries are the ones who see things first hand and have the power to stop everything. If structures are in place for the workers to feel safe to rise up, stand down, strike, and change the industry, we can see monumental changes in the way our environment is protected. For example, when Inuit communities blockaded the Baffinland Mine last year in Nunavut, workers wrote an open letter in support, explaining: “We are writing to express our full support for the efforts, means and goals of your protest…We recognize the Inuit as the rightful custodians of this land, and as the people who should make decisions about how it is used.”

For workers in already-existing low carbon jobs, improving their material conditions is also a climate solution. As the pandemic has shown, there are many workers who are already in low carbon jobs but are paid low wages and denied basic employment protections–like migrant farm workers, personal support workers, grocery store workers, and care workers. Childcare work, for example, is both environmentally “clean” and necessary for society. Improving the conditions of childcare workers–meeting the demands that thousands of childcare workers are making for better wages and decent working conditions–is a step in creating and maintaining carbon neutral jobs. As Naomi Klein explained, “turning low-paying low-carbon jobs into higher-paying jobs is itself a climate solution and should be recognized as such.”

Building the May 1 day of action

May 1 is a chance for workers to unite for the environment by building workers’ power. Whether we’re hitting the streets or talking to our friends and coworkers, the mass worker action on May 1 is a chance to empower all workers and build a world where extractive workers are free to support the environment and carbon neutral workers can survive and thrive at their jobs.