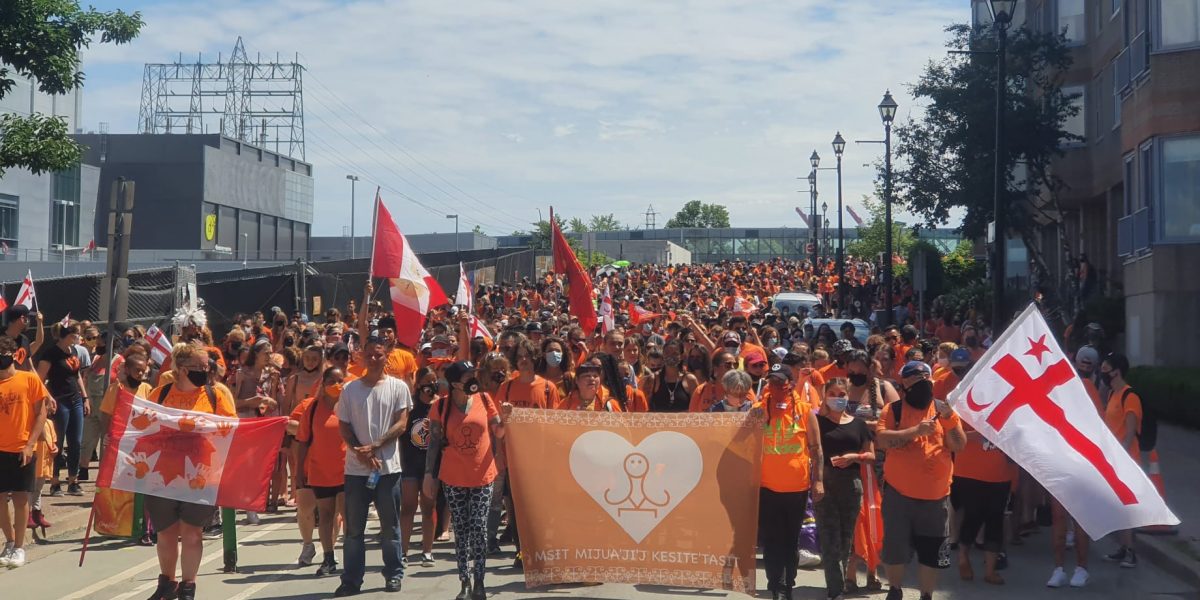 Nearly 1000 people gathered at the Peace and Friendship Park in Kjipuktuk/Halifax on Thursday for a memorial to honour residential school victims and survivors.

The memorial was organized by Caitlyn Moore of Qalipu First Nation, Trevor Labrador of Acadia First Nation, and Lauren of Malikiaq, Kespukwitk.

Labrador, who attended the Shubenacadie Indian Residential School in Nova Scotia, said that the memorial was held to honour the Indigenous children whose remains have recently been found around the sites of former residential schools across Canada.

The finding of unmarked burials

On May 27, the community of Tk’emlúps te Secwépemc announced the finding of the remains of 215 children who attended the former Kamloops Indian Residential School in British Columbia. Throughout the month of June, the remains of an additional 35 previously unidentified children were found near Lestock in Saskatchewan, as well as at least 35 unmarked graves at the site of the former Regina Indian Industrial School; 104 potential graves near Brandon, Manitoba; 751 unmarked burials at a cemetery near the former Marieval Indian Residential School in Saskatchewan; and 182 unmarked burials at site of the former St. Eugene’s Mission School in British Columbia.

The July 1 memorial began at the newly renamed Peace and Friendship Park with an opening prayer, followed by speeches from the event organizers and remarks from Indigenous elders and residential school survivors.

Lauren, a co-organizer of the memorial, noted that it is important that the memorial be held on July 1.

“Celebrating a country that has committed genocide against First Nations, Inuit and Métis peoples is not a day we should celebrate without reconciliation,” said Lauren. “People need to know the truth, and unlearn the false history that they have been taught.”

The truth about the Canadian Indian residential school system

The Canadian Indian residential school (IRS) system was a network of boarding schools that colonizers forced Indigenous children to attend. The system was designed to remove Indigenous children from their communities and assimilate them into dominant Canadian culture. It was funded by the Government of Canada and administered by Christian churches from the 1870s until the last residential school, Gordon’s Indian Residential School in Saskatchewan, was closed in 1996.

139 residential schools are officially recognized in the Indian Residential School Settlement Agreement (IRSSA) in Canada, but that number does not include schools that operated without federal support, like those run solely by religious orders or provincial governments. About 150,000 Indigenous children were forced to attend the residential schools between the 1870s and 1997.

Moore, a co-organizer of the memorial, put the number of Indigenous children who were killed at residential schools in perspective, stating that “1 in 25 children are said to have been killed at the schools, while 1 in 26 Canadian soldiers were killed in World War Two.”

What this suggests, according to Moore, is that the actual number of children who were killed at the schools is likely much higher than the 4,200 deaths currently recorded.

Following the recent findings of children’s remains, there have been over 100 requests for federal funding by Indigenous communities across Canada to conduct similar searches around other residential school sites.

In early June, Sipekne’katik First Nation announced that a search would be conducted at the grounds of the former Shubenacadie residential school in Nova Scotia. Survivors of the school have long spoken about the abuse that took place and the children who were killed there, and have recently renewed their calls for answers.

The effects of the IRS system

Moore described how the effects of the IRS system are experienced by Indigenous people locally and across the country. She said that “the genocidal tactics of the Canadian government did not end with the closure of these schools.”

Moore spoke about how the Government of Canada continues to deepen these injustices through a set of violent practices. Forced sterilization, birth alerts, and the child welfare system are what Moore described as a continuation of the legacy of the IRS system to this day.

The Truth and Reconciliation Commission of Canada (the TRC) was active from 2008 to 2015, organized by the parties of the Indian Residential Schools Settlement Agreement. It was established to document the history and lasting impacts of the IRS system on Indigenous communities and released its final report in 2015, which concluded that the IRS amounted to cultural genocide. The TRC released 94 “calls to action,” which include calls for governments to identify residential school gravesites, and for government agencies to provide documents on the deaths of Indigenous children in residential schools.

Moore reflected on the Government of Canada’s record on the TRC calls to action: “The action and response of the federal government is severely disappointing and further shows how much we have to fight to be viewed and treated as people, as human. Flags, fake apologies and crocodile tears are not the road to reconciliation. Better can be done.”

Organizers of the memorial supported people with planting flowers at the Peace and Friendship Park in honour of the lost children and survivors. The planting was followed by a prayer and singing of the Mi’kmaq Honour Song. The memorial continued with a march to the Halifax Waterfront, and concluded with singing the Water Song on the pier.

Following the memorial, Moore said that she hopes people will learn more about Indigenous issues and how we can move towards reconciliation:

“Reconciliation will not happen overnight, but your mindset on our people can. The Canadian government is happy for the public to believe we are a huge part of the problem. The lack of education to the general population is also a huge contributor. We hope that while we honour our lost children and survivors that you may learn something as well. Ally voices are extremely beneficial to making Turtle Island a better place for everyone. Your solidarity with us is appreciated more than you know. Wela’lioq/thank you all for being here with us today.”

A national Indian Residential School Crisis Line has been set up to provide support for residential school survivors and others affected. People can access emotional and crisis referral services by calling the 24-hour national crisis line: 1-866-925-4419.