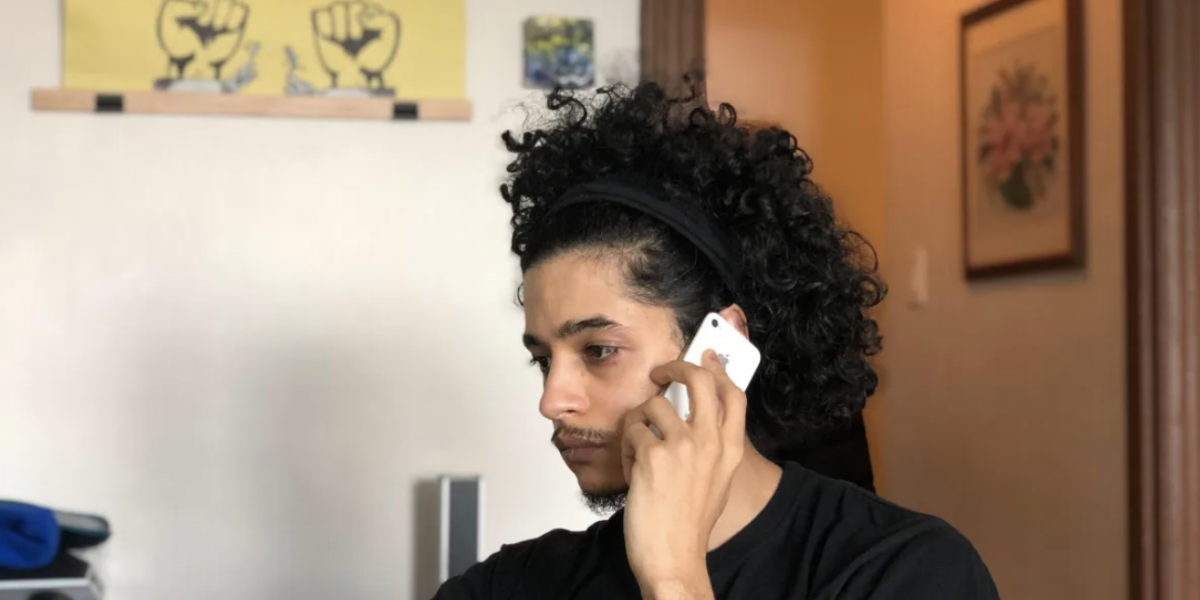 While the pandemic has been a never-ending nightmare for us all, it has been more intense for those of us with incarcerated loved ones. Knowing that many incarcerated and unhoused people are being abandoned by the government’s pandemic response, Souheil Benslimane is moved to action. You can find them on their bike around Ottawa, delivering cooked meals, grocery cards, and money to those in need. As the coordinator of the Jail Accountability and Information Line and through the Prisoner Emergency Support Fund, Souheil is working tirelessly to create mutual aid networks for hundreds of recently released prisoners to access housing, food, safety, and financial support. They have even opened their own apartment to ensure people have a roof over their head and can stay off the streets to avoid the revolving door of the prison. Souheil has become a leading voice in this country against human caging, relentlessly pushing for decarceration.

For Souheil, this is not about charity or benevolence; their belief in mutual aid outside of state structures and to build worlds anew is a political philosophy that challenges the very existence and enforcement of the genocidal, racist, and cisheteropatriarchal Canadian state. As someone who was themselves incarcerated for five years and is currently living with precarious immigration status, Souheil describes themselves as “criminalized and illegalized.” Souheil’s lived experience, coupled with their political work as an outspoken prison and border abolitionist, makes them a clear target for state violence, surveillance, and repression.

On December 31, 2021, Souheil appeared at the Canada Border Services Agency (CBSA) offices for a routine immigration check-in. Shortly after arriving, the Ottawa Police Services (OPS) detained and arrested Souheil and their close friend. The two were detained for hours, Souheil’s home and their friend’s car were searched, and they were both informed they would face serious trumped up charges. Shortly after their arrest, hundreds of people sprang into action calling on the Ottawa police to release them. Only a few minutes before midnight, the police finally released Souheil and their friend with no charges and no explanation.

While these facts alone are concerning, the actions of Ottawa police on New Years Eve raises serious questions about the growing trend of police targeting and harassing outspoken community organizers. We are witness to the punitive arrest and repression of interconnected resistance movements – from Wet’suwet’en land defenders, Secwepemc Tiny House Warriors, and 1492 Land Back Lane, to housing advocates and Black youth (including many Black youth who are disabled and/or Muslim) who are part of encampment support and eviction defense networks in Toronto, Hamilton, Vancouver and Halifax.

These politically-motivated arrests, as well as Souheil’s arrest, are intended to demonize and criminalize movements that are unapologetic in their defiance of state and capitalist plunder. We are living through a powerful moment of resistance to rampant colonial, imperialist, racial, gender, sexual and economic injustices – systemic fault lines that are being further illuminated during this pandemic. As Souheil says, “We’re tired of a system that targets us, targets people of colour, targets people living with mental health illnesses, targets people living with disabilities, targets people based on their gender or other identities. This is a system that is harmful, that injures, kills, and perpetuates colonialism and genocide.”

We are particularly concerned that the recent arrest of Souheil and their comrade will only escalate the state’s repression of Souheil; in particular, that it will likely increase Souheil’s risk of deportation as a non-citizen of Canada. While the criminal charges were fabricated and dropped unconditionally, the archaic immigration and deportation process allows hearsay – that is, unsubstantiated rumours – to be used as evidence by decision-makers when considering who to let stay and who to deport. Since 2018 Souheil has been unjustly targeted for deportation to Morocco, a country they have not been to in over sixteen years.

The convergence of the criminal legal system and immigration system is most apparent in the racist practice of ‘‘double punishment.’ Double punishment refers to the immigration consequences of criminal sentences. Non-citizens of Canada, including permanent residents and refugees, are subjected to a two-tiered legal system. When non-citizens are convicted they are not only punished by the unjust criminal legal system, but they also often face the additional punishment of negative immigration outcomes including deportation. Double punishment is a violation of the prohibition on double jeopardy, a legally-enshrined protection from being tried or punished for the same act twice.

This overlap of the punitive criminal and immigration legal systems ensnares non-citizens in a wide carceral web involving police, immigration officials, border agents, jails, prisons, and immigration detention centres. Double punishment is directly related to the racial targeting and surveillance of Indigenous, Black and racialized communities by the police. Racial profiling and surveillance, which includes practices like carding and identity checks in racialized neighborhoods, can frequently lead to arrests. For racialized migrants, these targeted arrests can trigger not only criminal charges and incarceration, but also indefinite detention in Kafkaesque immigration detention centres and subsequent deportation. This police to prison to deportation pipeline is a violent cycle of precarity and expulsion from one’s loved ones and community.

In Souheil’s case, they moved to Canada as a permanent resident when they were sixteen years old. As they describe:

“Permanent residents need to be on Canadian soil for three out of five years to be eligible to apply for Canadian citizenship. During that mandatory period, I acquired a criminal record… While I was a young [person] not unlike most, I think that my oppressable identities defined along race, age, class, and immigration status contributed greatly to my criminalization. Indeed, being a Brown-Arab teenager was a reason to be targeted by the police in Gatineau for illegal search and seizure… This increased my chances of becoming criminalized as a racialized youth and, by extension, Illegalized as an immigrant.”

Now, nine years after their last charge and four years after a successful conditional release from prison, the settler-colonial state of Canada is still actively attempting to deport them. Souheil’s home is here, where they have developed deep roots within their local community. Souheil loves to read, fish, camp, cook, do art, and take their son on adventures. Their impending deportation has had a devastating impact on their family, including their eleven-year-old son Omar, their mother and father, their two siblings – all of whom are Canadian citizens. Omar already endured the trauma of losing a parent while Souheil was incarcerated for five years. Often in tears, Souheil’s son expresses how afraid he is that he will be separated from Souheil again. Given that Souheil is out as queer and gender-nonconforming, as well as a vocal political activist, there are strong reasons to fear for their safety should they be deported to Morocco.

The #KeepSouheilHome campaign is part of the broader fight against the systemic racism and violence that is embedded within both the criminal legal system and immigration system. Refusing double punishment is a refusal of the anti-Black and classist divisions between ‘good/deserving’ and ‘bad/undeserving’ immigrants, the latter of whom are overwhelmingly subjected to poverty, profiling, isolation, and dehumanization. It is a rejection of the violent borders that divide, contain and control Indigenous lands and peoples, and we stand in solidarity with Indigeous nations fighting for decolonization and Land Back.

Organizing against double punishment is a method of disavowing Canada’s veneer of multiculturalism and border imperialist practices. Canada is responsible for creating displacement globally, yet decides who deserves to remain on stolen Indigenous lands. Resistance to double punishment is located within the abolitionist vision to reject a narrative of individual innocence and to, instead, dismantle all carceral institutions based on white supremacy, racial capitalism, and genocidal settler colonialism.

Every day, Souheil faces precarity as the threat of imminent deportation looms. CBSA is empowered through government legislation to deport illegalized migrants like Souheil at any moment. It is terrifying and emotionally draining for Souheil to know their life can be pulled out from under them without notice. We are a collective of professors, lawyers, health workers, organizers and community members who support Souheil and are committed to keeping them home. We encourage you to support this campaign by donating to Souheil’s GoFundMe, following our social media platforms (Twitter and Instagram), educating yourself on the harms of double punishment, joining the Community Support Network and supporting abolitionist efforts in your area.

Souheil is one of too many illegalized migrants who are marginalized, criminalized and unsupported after migrating to “Canada” and later punished — as if the state can wash its hands of systemic issues that lead to criminalization. The state’s practice of deporting migrants on stolen land must end. We encourage you to support organizations like Migrant Rights Network, End Immigration Detention, Solidarity Across Borders, No One Is Illegal, Migrante, and protect and defend community members at risk of deportation. Offer your money, time, skills, and homes to people opposing deportation, immigration detention and incarceration.