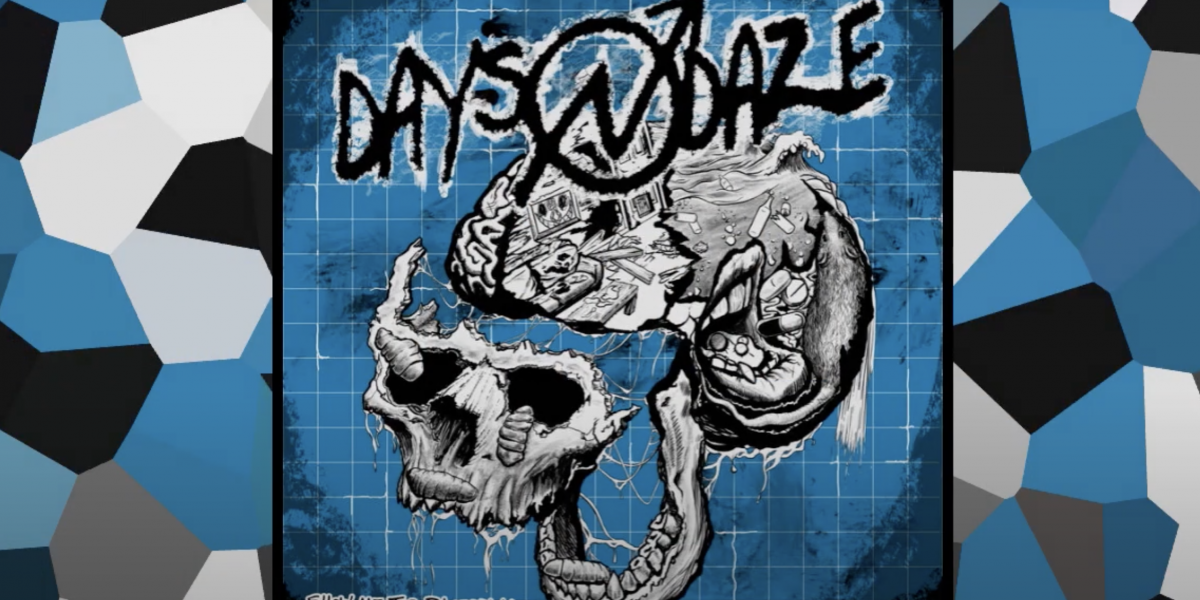 Days N Daze formed as a duo in 2008. Band founders Whitney Flynn and Jesse (Je-C) Sendejas performed their first set of original music (and a killer cover of Neutral Milk Hotel’s “Communist Daughter”) for a handful of listeners at a San Marcos, Texas coffee shop that year. They’ve remained the heart of the group, several band members, dozens of songs, numerous side acts and millions of tour miles later. Longtime members Meagan Melancon (washboard) and Geoff Bell (washtub bass) round out the Houston-based group, which begins a new decade of music with Show Me the Blueprints. Out now on Fat Wreck Chords, it is Days N Daze’s eighth full-length album and its debut effort for the iconic punk label. Interview With Whitney Flynn and Jesse Sendejas.

Days N Daze has been a band for over a decade! How does that feel to think about? What do you feel like your journey has taught you all?

J: It’s pretty wild!! Just proud of us for stickin’ together. Definitely got some lessons in perseverance over the years. Learned how to roll with the punches and work as a team.

W: So many lessons! I think most importantly it’s taught as to work more as a family than a band, being there for each other through thick and thin, never giving up on each other.

I know relationships within the band have changed over time too. How has that influenced the way the band carries itself?

J: Where we’re at now it just seems like everything we’ve been through together has left us with a deeper understanding and appreciation for one another. We’ve all seen the highest highs and lowest lows side by side and when you build a bond like that with a group of people it’s not one easily broken.

W: I think we’ve also grown with our stage performance and confidence, feeding off of each other, to have been able to go as far as we’ve come and still be so excited as group for our hopeful future.

Not only does DnD have an incredibly accomplished catalogue of music, but many of you are involved in numerous side projects as well. How did these come about and how are they different from the DnD hive?

J: Just fun to have other set ups. One song can sound vastly different if different people are playin’ it with different instruments. The lineups and instrumentations aren’t the same, obviously, but aside from that all our side projects stick pretty close to what we do with DND. I mean, it’s still us makin’ that music so it’s still gonna sound like us.

W: Jesse’s and my own writing are almost polar opposites outside of what we create together with Days N Daze, so being able highlight our “strengths” as writing with different musicians while always having DND is a super healthy outlet for both of us.

What is the music scene in Texas like? What are some of the venues and bands we should support when the world opens back up?

J: It’s great!! We grew up in the punk scene in Houston and it was just a blast. Made friends for life and saw some incredible local shows. Just SO many talented musicians spread across the state. A few off the top of my head: Shooting Tsars, Gen Why, Filthy Arsenal, The Real McCoys, Marissa., Noogy, Podunk Parliament, Molotov Compromise, and a hundred others. Lucky to be from a spot so inundated with kickass music.

W: I do my best when I’m back in Houston to go to as many local shows as I can, it’s our roots, our home. We owe everything to the support of our hometown. Venues that have been holding down the underground scene recently have been House of J and Trip Six hands down! So much love for Texas Punks.

And who’s going to cook us the best breakfast when we crash on their couch?

J: Haha, that’s a good question. So many generous folks have made us so many delicious breakfasts over the years. Regardless of where we stay in Albuquerque we always eat breakfast at The Frontier. I know maybe that’s kinda cheating on that question, but that’s our tour breakfast ritual. That bean burrito with a side of green chili cheese fries spread over top. Delicious. That and Bons in Vancouver. Hard to beat breakfast for 2.95.

W: If anyone ever gets the chance to crash at my grandma’s house… or have breakfast there, Bobo holds it down. Same goes with Jesse’s folks. Home cooked breakfast, can’t beat it.

Your new album, Show me the Blueprints, is awesome! It features a really rich sound and has some truly amazing tracks on it. What was it like releasing your first album with Fat Wreck Chords? Were you nervous about that aspect?

J: So glad ya like it!! It was overwhelming at first, but everyone was so patient and supportive. Once we got into the flow of things it was super fun. We were definitely nervous when we first started out, though. I mean, it took a while just to shake off bein’ starstruck around Mike and focus on what we were doin’. XD

W: In retrospect, it’s almost silly how nervous we were, it ended up being one of the best experiences as an artist I’ve ever had! As a whole it was just completely inspiring and such an overall amazing time.

DnD has always had lyrics that dig deep, both personally and politically. Were there any tracks that you found difficult to write for this album, or some that just flew out of you?

J: The new album is a collection of songs we wrote over 3 or so years so we didn’t really force any of it. There were a few that were easier to write though. Flurry Rush, Goodbye Lulu Pt. 2, AddVice, and Saboteurs specifically were a few that just kinda flowed.

W: The hardest one I had showing everyone was Fast Track, but the instant acceptance of that song gave me the support and confidence to release about something that isn’t the easiest to write/talk about; a huge part of grief/loss is being angry, being human and vulnerable not just about the happy or sad but including everything in between as well.

As we’re living in the time of Covid, what messages from the new album do you hope come across to listeners?

J: I hope it comes across that no matter how bad things get there are still reasons to be hopeful, and when you’re in those dark places please, know you aren’t alone. These are weird lonely times, but other people understand and relate to what you’re feeling. Please don’t keep those feelings to yourself. It’s ok to ask for help and if ya need to speak with family, friends, or professionals in the support industry you’ll find that people really do care.

W: Yes to everything Jesse just said! And sometimes it is okay to relax, as a chronic busybody, I went through a phase of depression without the deadline of… ‘tour is in two weeks.’ After finding myself on the other side of that I realized that there is a never-ending list of things to do, the hardest part is getting out of bed!

The band is typified by the unique ‘thrashgrass’ style, as well as carrying the flag for the DIY (Do-It-Yourself) ethos. From self-producing and managing your own shows, it’s clear that these ideals are an extension of many principles that are key to building a more creative, productive, and democratic society. Why is DIY so important to you as people and as a band?

W: I think the biggest part was this relentless need of “proving ourselves.” Like, we don’t need amps to be loud, we don’t need a stage to be seen, we don’t need an agency to booked, and we don’t need a label to be heard. If you said where we would be now five years ago, I would probably cry “holy fuck?? it was really worth it??” but honestly it was worth it back than (maybe even more so) being able to play your music, meet new friends and memorize miles with your favorite people… knowing WE DID THIS Has to be the biggest accomplishment anyone could ask for in one lifetime!

How has Covid changed the state of political organizing in Texas? How have organizations adapted?

J: I actually haven’t noticed a huge change down here. I mean, a lot more folks in masks and gloves, but things are still moving for the most part.

W: I’ve been thinking about how that a bunch. How I’m not really noticing the change. I think it’s because whenever we’re in one place we basically hibernate making up for the months spent on the road. This time it’s just more weeks we’re given. I think this is the longest Jesse and I have ever been in the same (but different) place at the same time in over a decade. Definitely the anxiety of “growing roots,” especially in the midst of a pandemic is pretty foreign to both of us.

Finally, once we’re allowed to hug and share drinks again, how do you see the state of the world changing?

J: I think punk shows are gonna be fucking awesome for a while right when this is done!! Seems like we all can’t wait to get back to swappin’ sweat in the pit!!

W: Band family dinner…(I would even agree to Wafflehouse) if I could just sit, talk, laugh and eat with my band again.

What are the next steps in the DnD plan?

J: We plan to just keep doin’ what we’ve been doin’. We got a few tours set up. We’ll start writin’ for whatever we record next. Just same ol’ same ol’!!

W: SO MUCH! I guess that would go along with Jesse’s “same ol same ol” We’ve got re-releases, constantly doing our best to find inspiration, we’ll have the most tours once everything goes back to the new normal, and we’ll continue to do our best to grow and try our hardest to be there for the people who are there for us!

J: If ya wanna hear some more of our music check out My Pizza My World, Chad Hates George, Decathect, and Escape from the ZOO. Hope you n yours are doin’ well all things considered, and hope to kick it at a show sooner than later!! Other than that just thank ya so much for the questions. This was fun!! =]

W: I think I can say for all of us we really hope you check out and enjoy the album! We’ve always got a multitude of music and chaos going on..so be sure to follow us on the interwebs. <3

D'Arcy is from the lekwungen speaking people's territories (Victoria, BC). He is a member of Spring, Climate Justice Victoria, and LoveMusic HateRacism Canada.