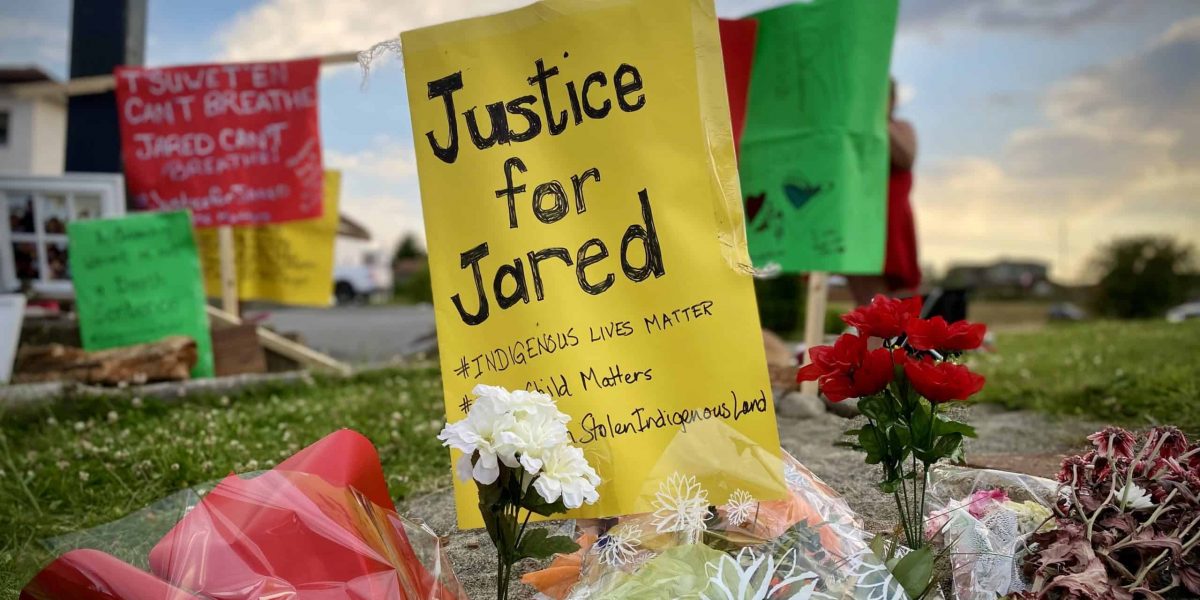 Content Warning:  Police killing of an Indigenous man and use of dogs as weapons.

On July 8, 2021, RCMP officers surrounded Jared (Jay) Lowndes in a Tim Horton’s parking lot in Campbell River, B.C. A police dog was sent in to scare and attack him. Lowndes, a proud member of the Laksilyu (Small Frog) House Wet’suwet’en, was a dedicated father of two daughters, seven and fourteen years old. Lowndes was also a son, a brother, a nephew and an uncle. He was living in Campbell River because his daughters and extended family have ties to the Homalco First Nations.

The RCMP killed Lowndes in that parking lot. No one in his family, nor his friends, still knows what Lowndes could possibly have done to warrant being shot and killed. He did not own a gun and would not have been a lethal threat. According to an RCMP press release, Lowndes was stopped around 9am on an outstanding warrant. He fled in his car until rammed by multiple police cars.

Lowndes’ lifelong friend, Randy Geddes, cousin & aunt arrived at the scene shortly thereafter. Geddes said something had happened to Lowndes’ face, the memory of it kept him awake at night. And Lowndes’ cousin said, from behind the police tape, she could see that his face “didn’t look right.” Lowndes’ family decided it was best to not have a viewing of his body. “But in hindsight, maybe we should have shown the world what the RCMP and the police dog did to him,” Lowndes’ mother, “Alunaye” Laura Holland said.  Holland continued, ‘My son is gone. I can’t see him. I can never see him again. But he’s with me. I’ll take him with me in everything I do, every breath I take, I’ll bring my boy with me.”

Lowndes had recently researched and written about the home of his Wet’suwet’en grandfather, John Baptiste:

“John Baptiste settled in northern British Columbia in 1904. He picked a spot north of Lake Tyhee, next to his brother Tyhee Davidson … John spent the next 3 years working the land with his children, building homes, a church and clearing fields to farm. Then in 1907, a mining company enlisted the help of the Supreme Court in Vancouver and the RCMP to steal my grandfather’s land. They were successful.”

The RCMP were created to remove Indigenous peoples from their lands, and contain survivors on reservations. There have been several historical and ongoing iterations of this land theft and genocide: residential schools and sixties scoop; missing and murdered Indigenous women, girls, and 2-spirit people; incarceration and “health-related” early deaths, to name a few, all of which implicate the RCMP. The removal of Indigenous, as children from their families, and also from their lands, is as Canadiana as the mounties themselves. Lowndes was taken from his mother and from his ancestral lands and waters.

Lowndes wrote about being taken from his mother by social workers and Vancouver police when he was just four years old:

“The social workers and Vancouver police show up, they have learned a brown woman has a white-looking child and are investigating. They talk in front of me, not knowing my mother has taught me to read and write. I know my mothers name, phone number and most major bus routes through the city by the age of 4. Not all children don’t pay attention. They decided for me, on the spot, that it would be in my best interest if they could get me to a white family to be raised properly. I was taken from my mother at gunpoint, and brought across the city to a foster home.”

Lowndes planned on returning to this family home, the home of his ancestors and community. If he had lived, this would have been impeded by the ongoing militarized RCMP, CIRG (Community Initiative Response Group). The police murder of Lowndes is an extension of the violence and brutality against the Wet’suwet’en people on their own unceded lands, including the use of police dogs. RCMP have spent $21 million on enforcement to uphold the CGL Pipeline on unceded Wet’suwet’en lands and waters and are currently assigning another 40 officers.  As Lowndes wrote just before his death:

“So kill me if you must, like you have so many of my relatives and people before me. It won’t change the fact there needs to be serious reform in the criminal justice system. How can anyone uphold the law without being held to a higher standard of law? Should the officers and jail guards be charged and arrested, I will appear for a new trial, one with a Jury like I requested and not presided over by a judge that will so nonchalantly cover up police crimes.”

The day after the killing, the Campbell River RCMP, Fire Department and community held a vigil – for the police dog. Not for the human, not for Lowndes, but the police dog. And although the site of Lowndes’ death was promptly set up as a memorial by loved ones it was just as quickly desecrated by local community members.

Since Lowndes’ death, the details of the case have been locked under what is turning out to be a long investigation. At the time of publication of this article, it has been eight months since Lowndes’ death, and still no word, no justice. It is as if the system is designed to try to cover up the truth. As a family friend wrote, “Six months (January 8, 2022) have passed …There is no adequate explanation for why they went after him when he was 4 years old (to separate him from his mother) or why they released an attack dog, Gator, into his car, to expedite and accelerate a terrifying deadly situation.”

Lowndes’ murder is being investigated by the Independent Investigations Office of BC (IIO) which “is a civilian-led police oversight agency responsible for conducting investigations into incidents of death or serious harm that may have been the result of the actions or inactions of a police officer, whether on or off duty.” But fifty percent of the “civilians” on this investigation team are former police. As Holland asks, “How can a justice department, an independent IIO review composed of retired ex-police, hold any promise for correcting the police? Old cops will be the first to support tactics of the past (kill the Indian, save the child) and have the least impetus to changing attitudes toward First Nations legacy policing.”

“As soon as a family becomes an ‘affected person’ in a police death or serious harm, they have to navigate a hostile bureaucratic structure while going through unthinkable grief. For example, they may have to go through court proceedings related to their loved one’s personal belongings, which are held during the investigation. Throughout this process there are no independently funded lawyers or advocates who assist families. The families are fighting multiple battles simultaneously: the RCMP, public perception, the IIO, and incredible grief, to name a few. While families grapple with the IIO, the involved police officers are not obligated to speak with investigators; They have Charter protections that protect their rights. With the asymmetrical process in mind, it’s clear that the IIO process can be truly dehumanizing for survivors and family members.”

The investigation report goes to the Chief Civilian Director (CCD), Ron MacDonald. There is no cross-examination, even if they are interviewed. The CCD chooses whether or not to advance the case to the Crown, and then the Crown decides whether or not to prosecute. Mannoe says, “the IIO is a gatekeeping body before it goes to the Crown: all of which is part of a deep historic and ongoing anti-Indigenous racism.”

I contacted the CCD, MacDonald, to ask for an update on the investigation. In an email response, MacDonald claims that an increase in police killings and harm are bogging down the investigation: “over the last two years the IIO has seen a doubling in its case load.” That there has been an increase in police killings and serious harm “case load” is not surprising, given increased police budgets and emphasis on fighting crime instead of housing, and other community support. This discrepancy between high police budgets and lack of community support is partly why there is a growing movement calling to “defund the police.” As corporate control of our economy, criminalization of the racialized poor and destruction of the natural world continue to increase unabated, police are being financially-supported to uphold a colonial and capitalist system.

Lowndes’ family, friends and community have set up a website in his memory:

“We demand that the Attorney General of B.C. (AG) addresses the severe injustices that face Indigenous people when they are harmed and/or killed by the police. We demand the AG implement the following demands immediately:

Make a donation to help cover the family’s legal fees. Any extra funds will go directly to Lowndes’ daughters. Follow the call for actions on the Justice for Jared website. Every month on the anniversary of Lowndes’ death family, friends and community create art and actions in his memory.

In solidarity and community,  “Who keeps us safe?  We keep us safe!”