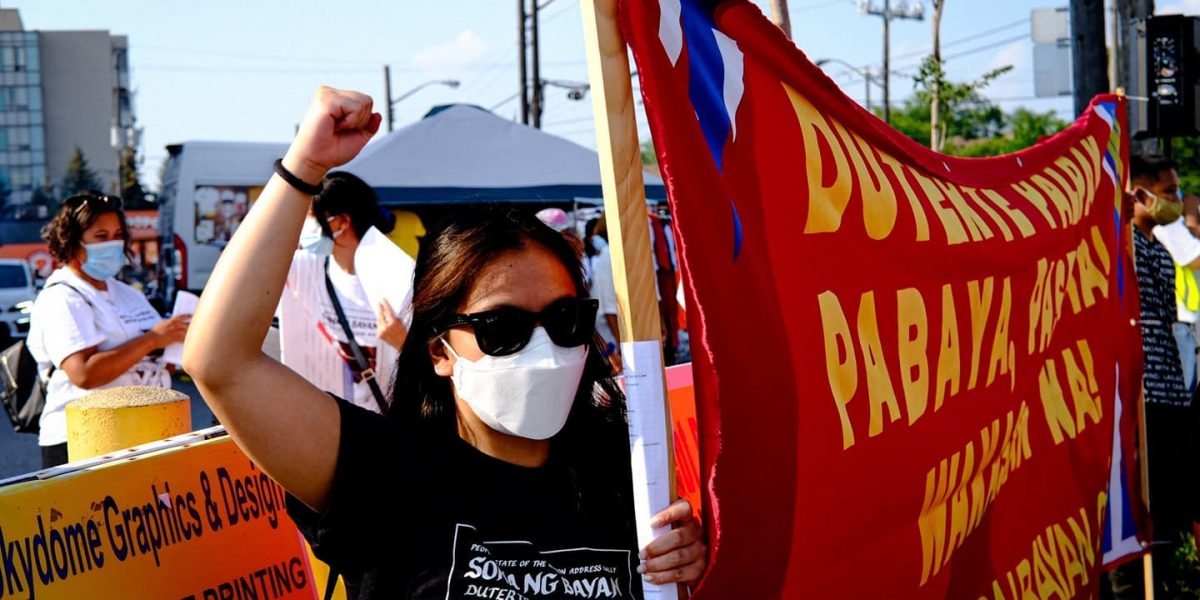 July 25 was a global day of action on the eve of Philippines dictator Duterte’s final State of the Union Address. Almost one hundred protesters in Toronto lined the busy intersection of Bathurst St. and Wilson Avenue to show solidarity with activists in the Philippines. The event featured speeches from allied solidarity organizations and powerful music.

Justin Dela Cruz of ANAKBAYAN-Toronto told Spring Magazine that, “Every year, President Duterte does his State of the Union address. And we don’t believe he’s actually going to portray the reality. He will portray something that will make him look good, something that will keep him in power.” Instead, as Al Quinn explained, “we’re giving the people’s version, from our perspective—like all the empty promises made, all the shortcomings, all the corruption that’s been happening.”

Charity Cruz, from ANAKBAYAN-Toronto, summarized Duterte’s policies and ongoing resistance: “During the Covid pandemic there’s been little or no educational or international support for students, making online education impossible. This administration took away education from many indigenous students in the Philippines. Youth are feeling hopeless about the future, how will they graduate and how will they get jobs? As a first generation immigrant I have seen my family give up everything to get here for a better life, yet we continue to be taken advantage of and treated as disposable. Meanwhile the masses of youth in the Philippines not only struggle to survive but face the oppressive laws of Duterte including red tagging. Even a 12-year-old has been murdered by the military. But despite hardship and threats they continue the revolutionary fight for genuine independence free from the exploitation of foreign powers, land-grabbing landlords and self-serving politicians.”

As Ryan Greenlaw from ICHRP-Toronto (International Coalition for Human Rights in the Philippines) explained, “The UN High Commissioner for human rights reported massive human rights violations including extrajudicial killings and illegal arrests. But the UN council failed to launch an investigation, so NGOs initiated their own investigation known as “InvestigatePH”. This will document human rights violations and make recommendations to the UN. But “we know international pressure is not the ultimate solution. Deep systemic change is required.”

Liberation, from Turtle Island to the Philippines

The event made the connections between Canadian colonialism at home and imperialism abroad, and the solidarity between migrant communities from the Philippines and Indigenous communities on Turtle Island. As MC for the event, Rhea Gamana from BAYAN-Toronto, explained during the Indigenous land acknowledgment, “We stand with the Indigenous peoples of this land and their struggles for land water and ultimately their total sovereignty. When we organize on these territories it is in recognition of ending the system of poverty and forced migration from our homeland. Ending the system of imperialism is the only way of ending the suppression of indigenous peoples on their lands.”

Poverty and forced migration has intensified during COVID—both from Duterte’s policies in the Philippines, and the conditions of precarious work that migrant workers are subjected to across Canada. As Aisha Kaalim from Migrante-Ontario, explained, “5,000 people leave the Philippines every day to work elsewhere because of the poverty in the Philippines. We are on the front lines during the pandemic but where is the support for us from the government? There is not enough financial support and lots of families don’t even qualify. People are living in shelters who had to leave their jobs but are not allowed to go back to the Philippines.”

As Jhona Binos from Makulay at iba pa, a Filipino LGBTQ+ organization based in Toronto, explained, the fight against Duterte is part of international working class struggles against oppression: “Members of the community continue to face discrimination and are violently killed by the state. The anti-discrimination bills meant to prohibit gender-based discrimination were first introduced in 2000. It has been 21 years and it is still not been passed. Our struggles are interconnected working class issues. From Turtle Island to the Philippines we fight for our liberation.” This message was echoed by Rawan Nabil, who shared a solidarity statement from the Palestinian Youth Movement: “In the same ways that our struggles are interlinked, so is our resistance. We recognize the efforts of the youth who are constantly pushing towards a future free of government control and suppression.”

Other speakers included representatives from the Palestinian Youth Movement, the Filipino Canadian Students’ Association, the Student Christian Movement – Ryerson, Iglesia Filipina Independiente (Philippines Independent Church) and the CPC-ML. As Al Quinn told Spring, “To win some important gains we need a lot of united support, whether you’re Filipino or not Filipino. The way Duterte survives, it is by committing a lot of human rights abuses. So we need to gather up as people to stand up against this because we are the masses. People make the history so we have to band together.”