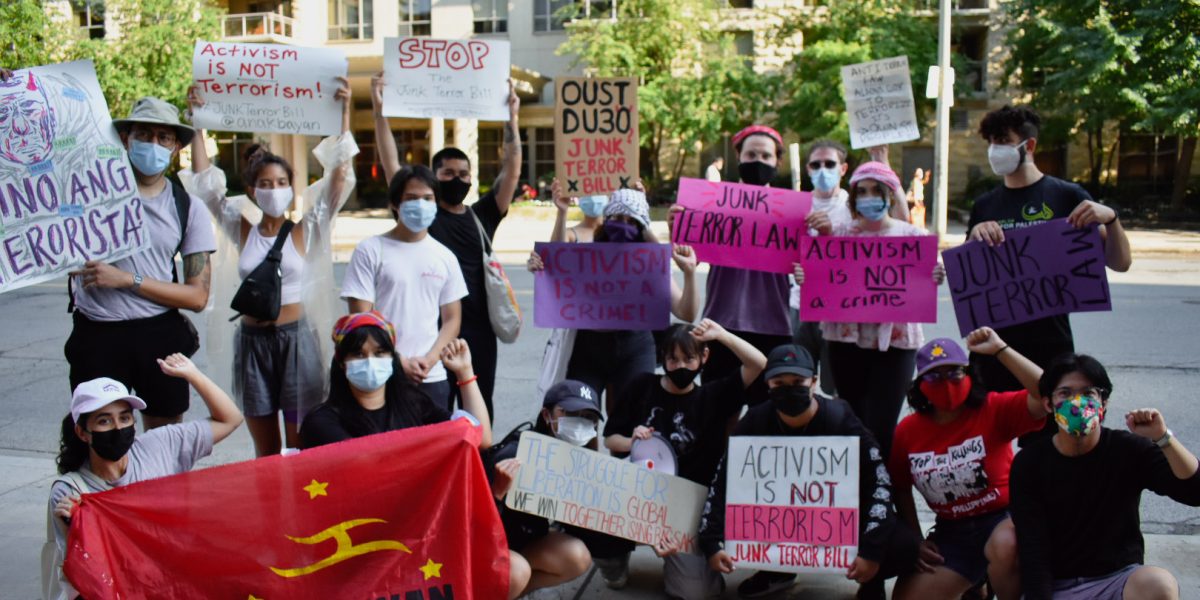 Filipino youth and supporters gathered in front of the Philippine Consulate General in Toronto to protest against President Rodrigo Duterte Anti-Terrorism Act, signed into law on July 3. The act grants the country’s security forces broad powers of arrest and detention. The legislation’s terms cast a wide net that activists in the Philippines and abroad warn will enable discriminatory enforcement, privacy infringements and the suppression of dissent. In the midst of the global COVID-19 pandemic, Duterte pushed the draft Anti-Terrorism Act through both the House of Representatives and the Senate.

Duterte’s legislation empowers the country’s security forces to apprehend civilians without a warrant and enables the use of detention prior to a court appearance. A body composed mainly of cabinet officials appointed by Duterte would authorize the use the act against targeted individuals. The Anti-Terrorism Council (ATC), consisting of members appointed by the executive, designate the country’s security forces to arrest people designated as “terrorist” without a warrant and detention for up to 24 days without a court appearance. Suspects convicted under the act may face up to life in prison without parole.

The act employs an overly broad definition of terrorism and makes it a criminal offence to “incite others” through “speeches, proclamations, writings, emblems, banners or other representations tending to the same end.” The Act does contain no appeal provisions as the Anti-Terrorism Council acts as the sole arbiter for all cases under Duterte’s legislation. While the Act exempts advocacy, work stoppages, and humanitarian action from the definitions of terrorism the Council determines whether or not the act “creates a serious risk to public safety.”

The Council’s secretariat will be operated by the National Intelligence Coordinating Agency (NICA), the government’s main intelligence body composed primarily of security force officials. Along with NICA, the National Task Force to End Local Communist Armed Conflict operated by the National Security Council has carried out a policy of surveillance, harassment and suppression against activists and organizations they claim are fronts for the New People’s Army, the armed wing of the Communist Party of the Philippines.

Jesson, an organizer with Migrante Canada, said this was a step backwards for human rights in the Philippines. Now the government is able to detain people without charges or access to courts by that a person has the intention to violates the law.

“This is alarming for migrant workers abroad because the act is so far-reaching that our actions in front of the consulate can be criminalized and they can file charges against us,” Jesson said. “Because there is an extradition treaty between the Philippines and the Government of Canada—the definition of terrorism is very broad.”

During the dictatorship of Ferdinand Marcos from 1972 to 1981, the US was the country’s most important colonial patron. Today, with the global rise of China and weakened US hegemony, the Philippines remains an important site where the US supports the Duterte regime in its consolidation of regional power. During the American war in Vietnam, the US used the Subic Naval Base for repair and maintenance of the US Seventh Fleet along with the Clark Air Base, a key logistics hub. After the US defeat in Vietnam, the Americans kept Subic and Clark to maintain a foothold in Asia. Marcos imposed brutal martial law during his reign, and the Americans backed him in exchange for the guaranteed presence of US military bases.

Ysh Cabana with Bayan Canada said that in four short years Duterte has committed more atrocities than Marcos who remained in power for 14 years. “Although there is no official martial law declaration, a ‘de facto martial law’ operates through the police, military, and para-military forces in the country used by the state apparatus.

Under Duterte’s ‘war on drugs’ thousands of people have been killed with impunity by the state. Cabana noted that “red-tagging,” a tactic used by state forces to criminalize dissent, targets civilians whom the government accuses of involvement in the country’s Communist armed struggle.

Imperialism and the Philippines

Today the US maintains military bases in the Philippines through the Enhanced Defence Cooperation Agreement (EDCA), supplemental to the previous Visiting Forces Agreement, and was signed into law in Manilla in 2014. Washington’s relationship with Duterte remains critical to the imperial competition with China and Russia in the Indian Ocean.

“Common people are caught in the middle of these inter-imperialist wars,” Cabana said. “We are not siding with any of these imperialist countries because our struggle is with the self-determination of the Filipino people.”

Maria Sol Pajadura, the chairperson of Migrante Canada, told Spring Magazine that in Canada Filipino workers are forced to move because of repression in their homeland work in Canada are disproportionately impacted by the COVID-19 virus where they are largely present in essential services. She explained that the Philippines treats migrant workers as exports and, then, they are exploited in Canada too by restrictive Immigration laws that force many workers to live as undocumented migrants. As Pajadura told the rally:

“Filipino workers are doubly exploited in the Philippines and in Canada. Here, precarious conditions are designed by a system that has little regard for our peoples’ lives. Filipino workers live and work in cramped conditions that are rampant with the COVID-19 outbreak. Since the 1970’s the Philippines has exported workers to countries like Canada. In fact, the Philippines receives 10 per cent of its GDP from remittances. During the pandemic, Filipino workers do not have the luxury of working from home. In places like the Cargill slaughterhouse in Alberta, there are over 900 cases of the virus and Filipinos form the majority of the workforce.”

Pajadura explained that many workers also come to Canada for work through the caregiver program, which promises permanent residency after two years of work. The Temporary Foreign Worker Program is another path to permanent residency, also after two years of work. Similarly, the Temporary Foreign Worker Program has also been an important source of migrant labour. Migrant workers who have lost their jobs are ineligible for the Canada Emergency Response Benefit. As Pajadura notes, “they must choose between making an income or protecting their health.”

“The anti-terror law can be used against dissenters even on social media. It only shows that Duterte’s anti-terror legislation is not different from the martial law of Marcos,” said Pajadura. “But just like Marcos, Duterte will be ousted by the people.”

“We are calling for the ousting of President Duterte. He has been in power for four years and for migrant workers abroad he has done nothing. He has made it worse as our economy is worse, human rights violations are on the rise, and more people have died in the Philippines,” said Jesson .”We are calling on Filipinos and our comrades to demand that the Canadian state withdraw its assistance to the Duterte’s regime.”

Along with Filipino youth groups, activists from the Latin American and Caribbean Solidarity Network, Young Japanese Canadians of Toronto, the Toronto Committee for Human Rights in the Philippines, the Palestinian Youth Movement, and Not Another Black Life addressed the rally and spoke about the links between their freedom struggles and the resistance of the Filipino people.