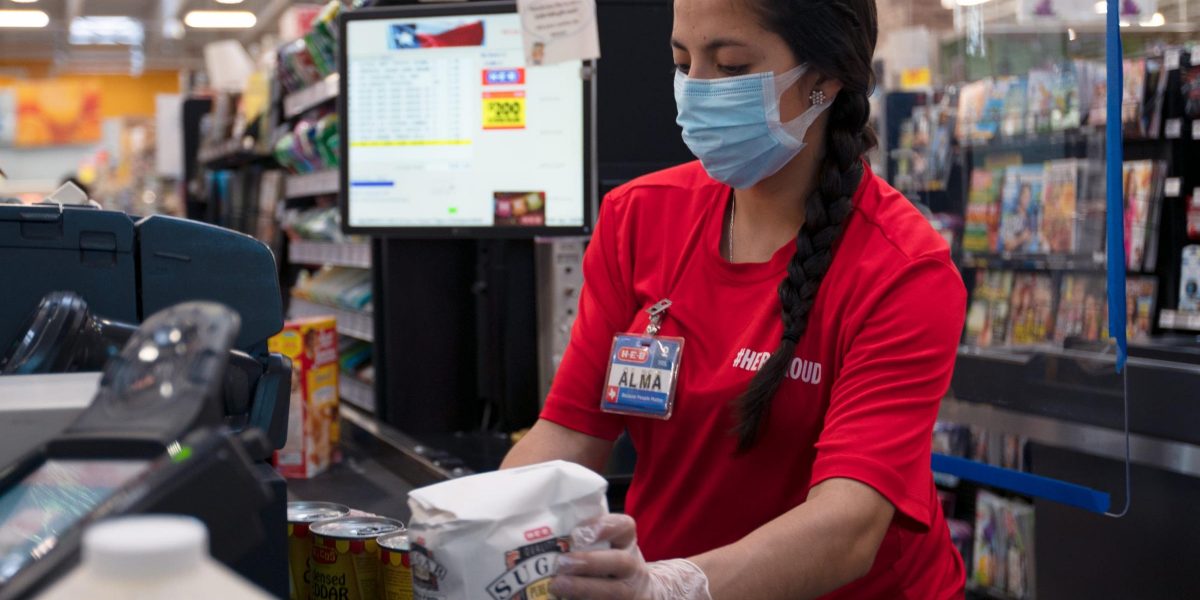 Sometime in March, almost overnight, grocery workers became ‘essential’. As key components in getting Canada’s food supply to the country’s dinner tables grocery store workers were suddenly in the spotlight. Now, with some in the media and employers arguing that the worst of the public health crisis is behind us, there is an attempt to move on from conversations about inequality and working conditions in the grocery store sector. But the truth is they’ve never been more important.

As in most other industries, COVID-19 has revealed the fundamental class conflicts on which Canada’s grocery empire rests: an outrageously profitable board of directors and shareholder valuation propped up by the labour of low-waged workers.

Loblaw recorded an operating income of $538 million in the first quarter of this year, a 34.5% increase from 2019, yet workers still have to make the impossible choice between a paycheque or staying home sick. And now they face having their $2/hour “pandemic pay” revoked by Galen Weston and other grocery store magnates, who’s decided that the worst of the pandemic is over. Weston even stated he would support a minimum wage increase, despite being for years one of the most vocal opponents to raising the minimum wage.

Though the inequalities are stark, the labour movement should look to the grocery sector as a field full of possibility. There is moderate union coverage across the country, represented by the United Food and Commercial Workers (UFCW) and Unifor. And in terms of the labour movement UFCW’s membership is powerfully unique, over 40 percent of UFCW Canada are under the age of 30.

During our tenure at Loblaw, we belonged to Local1006a and saw this first-hand. The grocery store sector is teeming with young people, some students, some not, whose material conditions makes them open to radicalization. Young grocery workers, of which there are thousands across Canada, experience outsized levels of underemployment, hour-cutting, low access to the benefits afforded to full-time workers, precarious and ever-changing schedules, and often piece together their lives out of multiple jobs or gig work. Modern grocery work has come to be distinguished by it’s largely part-time, precarious work that offers at best a patch-work of benefits.

Young workers in the industry are often saddled with student debt, stress, poverty, housing insecurity, and unemployment. No surprise that many young workers are open to radical ideas. Despite the high union coverage in the sector, unions largely fall short when engaging with these members. The high turnover high turnover rates and low wages in the industry drive apathy, fragmentation, and division, making connecting with members challenging.

As union members already interested in left politics, we kept our eyes on what happened on the shop floor. On a basic level, our local’s membership was deeply disconnected from the UFCW. Many coworkers considered the union a shadowy organization about which they maintained skepticism; some didn’t even know we were a part of it. Based in Toronto and the Greater Toronto Area, our local was far from combative (oftentimes more collaborative) during our time there, though we were front-and-centre of province-wide debates on the minimum wage and the changing nature of work for young people.

On the shopfloor, we heard the statement that our local left part-time workers high and dry on the second-to-last collective agreement. Part-timers had to log thousands of hours before seeing wage hikes. The most recent agreement corrected this, moving the union in a better direction. If the aisles were rife with apathy, cynicism or suspicion you couldn’t really be surprised. The union played little role in day-to-day work life, occasionally, safety committee members would slap wrists for shop floor goofballery. Grieving was always a possibility, too, if you needed it. Other issues, such as wage arbitration, played out in the background. Beyond that, though, you could work at a store for years and never concretely feel the union’s touch. The grocery giant stayed asleep.

Admittedly, engaging a workplace divided up by an overwhelmingly part-time workforce is no small feat. Workers only catching each other on the floor here and there doesn’t offer much promise for building solidarity. High turnover makes building something long-term difficult. And the individualizing culture of neoliberalism doesn’t exactly help. Yet, the fact that we had a union at all still gave hope to the idea of a radicalized grocery unionism. After all, one of the biggest feats – organizing a union in the first place – was already long behind us. The question was and is: how can the union better engage membership and harness collective strength to win?

There’s always more room for ceremonies, events, and making the union “seen” to workers. That’s one approach. Another is establishing more modern networks of communication (through social media, for example) which offers new and more relatable ways of connecting while transcending the physical space of the shop floor. In this, we can connect disconnected workers. Encouraging bottom-up organizing so that members can build and grow their own campaigns – and build themselves up as activists – can bring union leadership closer in understanding the needs of the rank-and-file, especially the part-timers who often feel forgotten. Workers, such as ourselves, could have always done more to have conversations about what was possible. The key to building real and transformative rank and file networks ultimately rests with the confidence and capacity of workers on the shopfloor. But this task is made much more difficult in a local with a minimal organizing infrastructure and tradition.

Ultimately, radicalizing the grocery industry must begin with its young workers. While UFCW 1006a does have a youth network, there is much more work to do in order to embrace the growing number of young workers that will continue to swell the ranks. And while UFCW has taken steps towards closing the wage gap between employees, there will need to be a continued effort in recognizing the needs of part time employees who’ve historically been cast aside. This can be a fulfilling, meaningful job with high wages and benefits — we just need to fight for it. If the workers most ripe for radicalization only view grocery work as a stop-gap on their way to something else, nothing will change.

Now more than ever, ambitious ideas are necessary. Grocery stores became one of the most important features of the pandemic economy, and accordingly their profits soared, their workers deemed ‘essential’ and “frontline heroes.” But if grocery workers are essential – and they always have been – there’s never been a better time to leverage their position. It’s time to extract concessions from an industry that’s built an empire out of precarious low-wage jobs, out of exploiting a disproportionately young, racialized women workforce.

This is not just about striking, although that’s likely a part of it – and UFCW workers in Alberta are ready to go. It’s also about communication, education, and engagement, about what kind of unions we want, about the politics of the now. The pandemic has ruptured the day-to-day of grocery work, laying bare the inequality on which it thrives. The question now is about how we use these revelations and opportunities. Do we build union education and be present in members’ lives? Do we harness the transformative power of a young and beaten-down working class and to build collective power and a promising future? Or do we go back to normal?