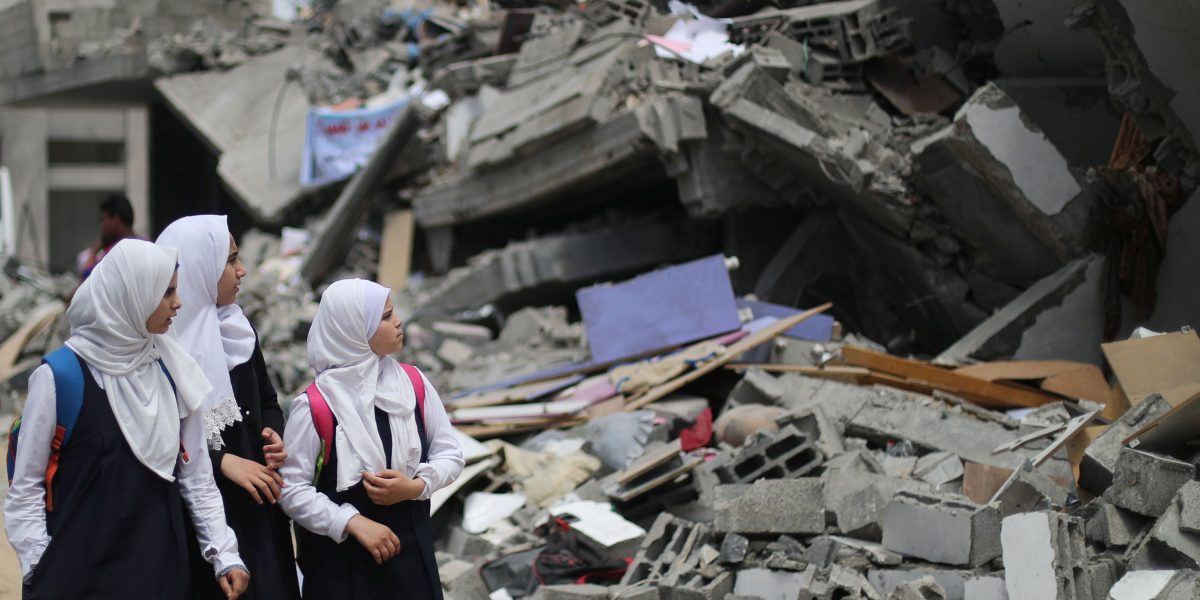 On November 12, Israel escalated its violence against Palestinians living in Gaza by firing a missile at the home of Baha Abu al-Ata, a senior commander in Palestinian Islamic Jihad (PIJ), killing him and his wife. At roughly the same time, Israel bombed Damascus to try to kill Akram al-Ajouri, who is also a senior PIJ commander; Syrian media said he survived but that his son and granddaughter didn’t. PIJ fought back by firing missiles at Israel, which then subjected Gaza to heavy bombing.

By the time Egypt brokered a truce on November 14, Israel had killed at least 34 Palestinians, 16 of them civilians and 8 of them children; three Israelis were wounded, according Israel’s paramedic service. Among the dead were 8 Palestinians in a single family. Israel initiated this violence against a population it holds captive—most of whom are refugees because Israel prevents them from exercising their UN-mandated right to return to their homes—something they can get away thanks to their virtual blank cheque from Washington. Yet somehow US Vice President Mike Pence and two of the leading candidates in the race to be the Democratic nominee for the 2020 election, Pete Buttigieg and Joe Biden, all described what happened as Israel defending itself.

Following the ceasefire, Israel said that it will continue assassinating Palestinian resistance fighters and that it will not stop using lethal army gunfire at weekly Palestinian protests at the fence that cages people in Gaza. When Israel carries out these actions, you can bet their sponsors in Washington will say that that’s self-defence too. Yet, as I argue in the following excerpt from my book, The Wrong Story:  Palestine, Israel, and the Media, it is wildly misleading to characterize such instances in this way.

News media outlets frequently present outbreaks of large-scale violence in Palestine-Israel in terms of “Israel’s right to defend itself.” This narrative says that whatever Israel may be guilty of, the state is justified in using military force to respond to Palestinian attacks.

But such media narratives about Israel’s “right to defend itself” mislead readers by ignoring the permanent violence of Israel’s colonization of Palestine and the aggressive pursuit of ethnic supremacy that this colonization entails.

The Israeli state was founded by massacring and ethnically cleansing Palestinians. Since Israel was created, it has repeatedly massacred Palestinians and Arabs in other countries, particularly Lebanon.

News outlets are not telling an accurate story when they frame Palestine-Israel in terms of “Israel’s right to defend itself.” The state cannot be seen as defending itself when it has carried out the most frequent and most deadly killings in the history of its relations with Palestinians and Arabs in neighboring countries.

The untenable narrative that describes Israel’s use of force as a just form of “self-defense” against the threat of Palestinian violence elides the ways in which the entire Zionist project, which long predates the existence of Israel as a state, has involved violently subjugating the Palestinians.

In a 2012 article in the Journal of Palestine Studies, Israeli historian Avi Shlaim finds that “violence was implicit in Zionism from the beginning, that the Arab-Israeli conflict was an inescapable consequence of the Zionist program” because “Zionism sought to create a Jewish state in a land that was already inhabited by another people.”

Shlaim’s research indicates that “since the 1920s the Zionist movement has had a clear strategy for dealing with the Arabs – the strategy of relying on military power in order to achieve its political ends,” which is known as “the strategy of the iron wall.”

Because the Israeli state and its forerunners in the Zionist movement have pursued their aims through the perpetual use of violence against Palestinians, Palestinians by definition cannot initiate violence against Israel. That means that the idea of “Israeli self-defense” is a logical impossibility.

Darryl Li, a former human rights worker in Gaza and researcher with Human Rights Watch now at the University of Chicago, similarly describes the Zionist enterprise as “the creation, maintenance, with (when possible) the expansion of a state for the Jewish people” that, when it is faced with opposition from the indigenous non-Jewish population, “produces a well-known longstanding operational mantra guiding Zionist settlement and annexation policies: maximum land, minimum Arabs.”

“When circumstances prohibit Israel from pushing natives beyond the territory it controls, this dictum produces a corollary: maximum Arabs on minimum land,” Li states in an article in the Journal of Palestine Studies in 2006.

Pursuing the largest possible amount of land and the fewest possible number of Arabs has entailed forcibly taking Palestinian land while separating Palestinians from each other and preventing them from having a viable, independent society.

In 1970, Israel began creating a “Greater Jerusalem” by redrawing the boundaries of the city to include Jewish-only settlements and by restricting the natural growth of Palestinian neighborhoods in East Jerusalem. Three years later the Israeli state legally mandated a 74.5-25.5 demographic advantage for Jewish people in Jerusalem.

It is prohibitively difficult for a Palestinian to get a building permit because these are very expensive and because they are not granted in areas with infrastructure shortages, which is an Israeli-created problem in many Palestinian neighborhoods.

Because these Palestinian homes are deemed illegal, Israel has a pretext for demolishing them. It is seriously misleading to cast a state that bulldozes houses and takes land at gunpoint as acting in self-defense against the people being dispossessed.

On the West Bank, vast areas have been effectively annexed to Israel through the wall and through the expansion of settlements and their infrastructure so that now Palestinians cannot access a near majority of West Bank lands for residential or economic use.

Such walls are built, Li explains, because Israel’s notion of “security” is inherently expansive: security of the Jewish population demands that Palestinian movement be controlled and that Palestinians be kept away from Jews. Securing this arrangement requires putting those Palestinians behind a wall. And such a wall in turn demands its own protection. The ideal way to secure a barrier is through a vacant “buffer zone.”

In Gaza, creating buffer zones has meant forcibly emptying the spaces in which they have been created of Palestinians, their houses, and their agriculture.

According to scholar Sara Roy in her 2006 essay “Economic Siege and Political Isolation: The Gaza Strip in the Second Intifada,” the years of the second intifada saw an intensification of Israel’s closure policy as well as the destruction of physical resources – such as homes, businesses, public buildings, factories, electricity infrastructure, vehicles, roads, schools, clinics, waste disposal and sanitation systems, water supply networks, telecommunications equipment, and agriculture, land, crops and infrastructure – all of which depleted Palestinians’ capital stock and immobilized the population, leaving the local economy dramatically eroded and their access to work, food, housing and other necessities severely undermined.

In these ways, Israeli violence against Palestinians is manifest not only in its immediate physical impact on Palestinian persons but in its consequences for their capacity to have a society in which they develop an economy and social services.

Furthermore, Roy points out that both the redeployment from Gaza in 2005 and the Oslo negotiations process in the mid-1990s serve Israel’s goals of maintaining “full control – both direct and indirect – over all Palestinian lands and resources; … securing, to the extent possible, demographic separation with the Palestinians, and thereby guaranteeing a Jewish majority within Israel … and insuring that if a Palestinian state is declared, it will be weak, diminished, and highly dependent on Israel.”

Moreover, military sieges of the sort imposed on Gaza are acts of war. In 2006, when Hamas won the Palestinian legislative elections, a senior Israeli official said that Israel’s planned response “is to put the Palestinians on a diet, but not to make them die of hunger.”

Israeli health officials calculated the minimum number of calories needed by Gaza’s then 1.5 million inhabitants to avoid malnutrition and translated them into the number of truckloads of food Israel was supposed to allow in each day. They said Israel should allow 170 trucks per day but only an average of 67 per day entered compared to more than 400 trucks before the blockade was enacted.

Christian Cardon, then head of the Red Cross’ Gaza office, said in April 2014 that Palestinians in Gaza face one of the highest unemployment rates in the world, “poverty, chronic fuel shortages and a scarcity of materials and equipment, which adversely affects health, water, sanitation and electricity infrastructures.” Cardon added that “in 2013 the Gazan gross domestic product fell by around three percent and is still below 1990s levels. In fact, the real average daily wage was lower in 2013 than it was in the 1990s.”

He noted that “the limits on the importation of affordable medical necessities … have created additional medium and long-term strain on an already fragile healthcare system. Many medical items, drugs and disposables have decreased in availability by up to 35 percent since June 2013.” Thus, Cardon said: “The pervasive restrictions on the movement of people for medical, educational and economic purposes should be eased.”

These salient features of Palestine-Israel demonstrate that narratives about Israel exercising its legitimate “right to defend itself ” are misguided. In effect every aspect of Israeli policy toward Palestinians is undergirded by violence or its threat.

The record above indicates that a more accurate version of the story of Palestine-Israel would describe how the Palestinians have been violently colonized. Yet nothing in my research indicates that conventional British and American media want their audiences to think of the Palestinians as people, families and communities with a right to defend themselves.

A version of this article has been previously published at Electronic Intifada.