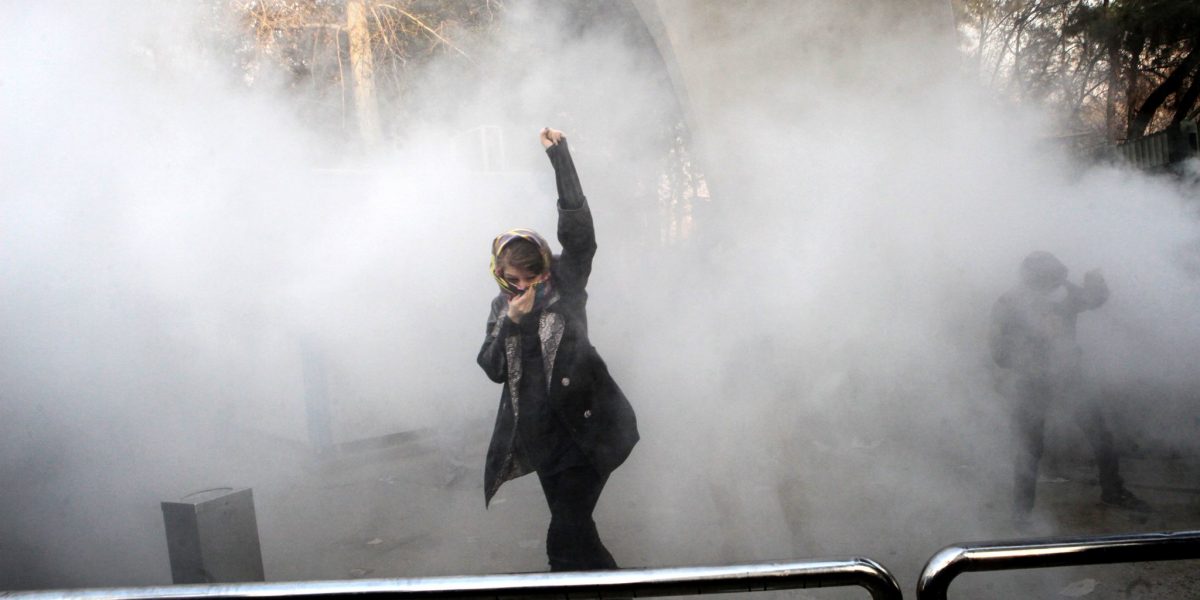 On September 13 Zîna ‘Mahsa’ Amini, a Kurdish woman, was brutally attacked by the Iranian Morality Police for not wearing her hijab “properly”. Days later, on September 16, Zîna was declared brain dead following symptoms suggestive of a head injury. In response, protests have erupted across Iran, bringing forth demands for greater freedom, democracy and an end to the Islamic Republic’s rule. The current protest movement is the largest and most sustained protest in Iran in the last 40 years.

The protests in Iran, which many are now calling a revolutionary movement, have been ongoing for more than a month and have taken place in all 30 provinces in Iran. The protest movement is being led by women and putting the attacks on women’s bodies, freedom and rights front and centre as the symbol of the oppression and brutality of the state as a whole. This is reflected in many of the slogans of the movement including the main chant of “Woman, Life, Freedom”, “Jin Jîyan Azadi” which is a longstanding Kurdish phrase first used in the Kurdistan Women’s Liberation Movement in 2008 and has radical anti-capitalist and anti-colonial roots.

Another chief characteristic of the current wave of protests is their decentralized nature. Rather than taking the form of big centralized demonstrations, the protests are erupting in neighbourhoods all across the country. Videos of women taking off the hijab and school girls confronting authorities show how this protest movement is impacting daily life.

While it is hard to get accurate numbers, the length and extent of this current protest movement is by all accounts bigger in scale than the 2009, 2017 and 2019 protests in Iran. The large amount of decentralized protests throughout the country have made it much harder for the Iranian government to repress them. The government has tried to shut down the internet, hold counter demonstrations and violently crackdown on the protesters. But so far their efforts have failed to stop the movement.

The current revolutionary movement in Iran did not appear out of a void. It is the result of over two decades of movement building and protest waves in the country.

In the wake of the 2009 presidential election supporters of the reform candidates who lost took to the streets to denounce what they deemed as fraudulent elections. This protest movement, known as the Green Movement, was large, and had its roots and its leadership mainly in the middle class and its demands were largely reformist in nature. The movement came to a crashing halt months after, with the first signs of state shooting and killing protesters on the streets and putting the movement’s leaders under house arrest. The end of the Green movement initiated a wave of depression and mass immigration from the country.

The next big wave of protests following the Green movement, occured in 2017/18 at a time when increasing state corruption, neoliberal policies, ballooning military spending and foreign economic sanctions had resulted in widespread unemployment, poverty and worsening economic conditions in the country. These protests centred around economic demands, an affordability crisis and the policies of the reformist Rouhani government. This protest movement was more rural and working class in character. And like the Green movement, it too was repressed by state authorities.

In late 2019 a new round of protests sparked by a rise in fuel prices and attacks on workers’ rights rocked the country. The protest movement in 2019 was bigger than 2017 and again largely working class in its composition. This protest movement was brutally repressed, with roughly 1500 people killed by the state while access to the internet was restricted. A mere few months following this protest wave, the Iranian government shot down Ukraine International Airlines Flight 752, killing all 176 of those on board the flight. The Iranian state’s legitimacy was hanging by a thread.

The current protest movement, bulit on the experiences of the last two decades, is not simply a call for reforms; it is a challenge to state authority. Protesters are connecting the demands for political, social and economic change. Iranian people across different provinces and cities, and across class lines and ethnic lines are participating in and supporting the protests. Steelworkers, teachers, small shop owners, contract oil workers are taking action and engaging in job actions and strikes. Students are walking out of class and taking over their schools and universities. In response the government is stepping up its repression – killing and jailing an increasing number of demonstrators, and brutal attacks on students at school and university campuses.

Ethnic minorities and the ongoing struggle for Kurdish liberation

The current movement in Iran also touches on questions of ethnic minority rights. Some of the fiercest repression of the protest movement has taken place in the Sistan and Balochistan province, home to the long-oppressed Baloch people. Dozens of Baloch protesters have been killed by security forces.

Likewise the movement in Kurdistan, where the current wave of protests began, has been met with violent repression. The Kurdistan province has historically been disproportionately targeted by the Islamic State and there are bans on Kurdish language education in schools. This is a holdover of the violent assimilation policy under Reza Shah that banned Kurdish dress, literature, music and dance.

To build a movement powerful enough to challenge the repressive government requires supporting the rights of ethnic minorities (such as Kurds, Azeris, and Baluchis) which make up roughly 40% of the population. Greater calls for freedom, democracy and economic justice must also aim to rectify the ongoing oppression of minority groups within Iran. Iranians and those in the diaspora must make active strides not to recreate the oppressive structures that disenfranchise various ethnic and religious minorities. Practically, this means uplifting Kurdish voices and honouring Kurdish history, autonomy and land back.

The level of international solidarity and diaspora activity during the current protest movement  has been unmatched. There has been daily coverage of the events in Iran on most global media platforms and many political figures, celebrities, media personalities and politicians have spoken in support of the Iranians movement. Cities around the world have also been sites of countless solidairity rallies, gatherings and protests. On the October 1 day of action there were protests organized in 150 cities across the globe and in Toronto alone, over 50,000 marched in solidarity.

This has no doubt created international pressure on the Iranian state, impacting its ability to repress the protests and provided an opening for calls for global solidarity, including enactment of diplomatic and media sanctions and stopping the financial activities and money laundering of Iranian state agents in western countries.

These calls have been occasionally met with negative responses from those who believe any solidarity with the Iranian people’s movement to be an act of supporting imperialism and western interventon.

The response is clear: The Iranian state is not anti-imperialist and it is not an ally to resistance movements. It is a repressive state that has killed and tortured its own citizens, systematically oppressed women, workers, ethnic and religious minorities, and continuously attacked and silenced the left since its inception.

The current revolutionary movement in Iran is led by the Iranian women, workers, and students in the country who are fighting for their basic human rights and the removal of an oppressive state. It is incumbent on the Canadian left to support this movement and respond to their calls for solidarity, amplifying the voices of the protests, and putting pressures on the western governments, including the Canadian state, to impose diplomatic and media sanctions on the Iranian state and remove the ability of Iranian state actors and their affiliates to engage in business and financial transactions in their countries.

We must remain critical of Western opportunists who have historically harmed Iranian peoples alongside other marginalized groups in so-called Canada. Under Stephen Harper’s government, which Pierre Polievere was a member of, the then Conservative government – along with the UK and US – imposed harsh economic sanctions on Iran which collapsed its currency and gravely impacted the lives of Iranians. The U.S. and other Western nations have a long and sordid history of intervention in the region that has only negatively impacted the people of the region and propped up tyrants and despotic regimes.

It is important to build solidarity for marginalized groups within Iran as well as connect the Iranian struggle to those on Turtle Island and oppressed peoples everywhere. This means building an anti-capitalist and abolitionist perspective of the protest movement. If the Left does not stand in solidarity with the Iranian people and be loud in their support, it only opens the door to the right to shape the political debate about Iran.