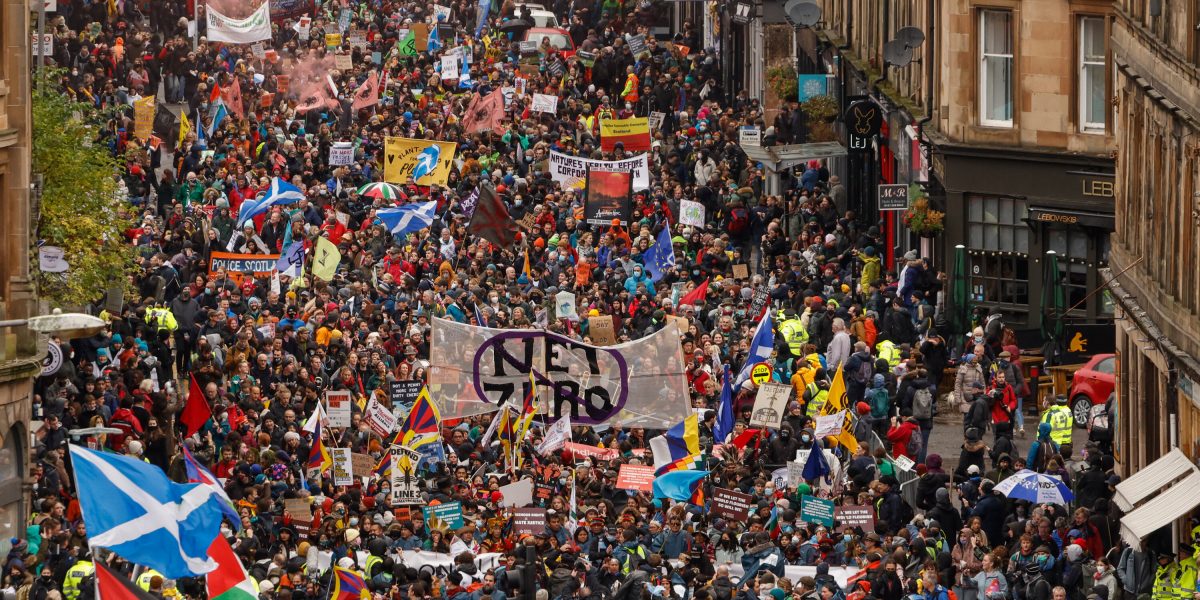 The 26th Climate Change Conference of the Parties (COP26) began with dire warnings from world leaders. This conference comes on the heels of August’s Intergovernmental Panel on Climate Change (IPCC) report.  Held in Glasgow and co-hosted by the UK and Italy, leaders and delegates from almost every country as well as influential individuals will meet until November 12 to solidify the terms of the Paris Agreement and commit to reaching net-zero emissions by 2050.

To prevent further catastrophic climate change, warming must be limited to no more than 1.5 degrees Celsius above pre-industrial levels. As of right now, the world is on track to warm 2.7 degrees. To change course, scientists have long argued that we must cut emissions by more than 80% by 2050.

As the summit continues, crowds of climate activists, including Greta Thunberg, fill the streets of Glasgow to demand more radical action. While leaders of rich countries set emission reduction targets, many accuse politicians of inaction and private companies of greenwashing.

In a speech delivered on November 2, Bolivian President Luis Arce said that rich countries are enforcing a new carbon colonialism on poor countries, which will only feed “the new green capitalist system” at the expense of poor countries who are forced into these agreements against their will. Green capitalism, Arce argues, will not stop climate change. Instead, he notes, “the solution lies in changing our current civilization model” and shifting towards a fundamentally different way of living.

Capitalism, “green” or otherwise, is based on extraction and exploitation of labour and the land. The industrial revolution, which ushered in modern capitalism, would not have been possible without African slavery and settler colonialism. The fact that mass destruction and pollution of the environment began in conjunction with these events suggests that capitalism and sustainability are fundamentally incompatible.

Noam Chomsky points out in a recent interview, there is simply not enough time to radically tear down and rebuild our institutions. He believes that given the urgent nature of climate change, we have no choice but to work within existing systems. But as COP26 turns to financial discussions, the willingness of existing systems to meet this challenge seems dubious at best.

What’s on the table?

COP26 set a list of primary goals, including reaching net-zero emissions by 2050 and setting emissions reduction targets for 2030. After setting these goals, countries will have to figure out how to phase out coal, curb deforestation, transition to electric vehicles, and invest in renewable energy. Other discussions have focused on how to support ecosystems and build infrastructure to protect vulnerable communities. Now that targets have been set, the key issue is how to finance climate projects and outline a viable roadmap to reduce emissions.

So far, wealthy nations have committed to reducing emissions, both vaguely and specifically. Justin Trudeau is pushing for a global price on carbon and pledged to reduce oil and gas emissions, although without any specific targets. He signed Joe Biden’s new Global Methane Pledge along with 99 other nations, which promises to reduce worldwide methane emissions by nearly 30% by 2030. Countries including Indonesia, Poland, and Vietnam have agreed to phase out coal, and 20 governments have agreed to end public funding for fossil fuel projects abroad.

Deforestation has also been a major issue since the early 2000s. In 2014, 200 countries, Indigenous peoples’ organizations, and other groups signed the New York Agreement, which pledged to cut deforestation in half by 2020. But so far, the opposite has occurred. Since 2014, deforestation has been 41% higher. At COP26, over 100 countries have signed a new agreement promising to end and reverse deforestation by 2030. The countries that signed contain about 85% of the world’s forests.

It’s important to note that there are complexities and conditions to each of these agreements. For instance, the agreement to stop investing in new coal plants abroad only applies to unabated plants, meaning plants that don’t capture their own CO2 emissions. Additionally, the coal agreement, like many others, is not binding. The dramatic headlines do not mean coal is actually going away anytime soon. In fact, demand for coal dramatically increased in 2021.

Furthermore, while rich countries have agreed to phase out coal by 2030 and poor countries by 2040, these dates are too late. Moreover, the U.S, Australia, China, and India, all major emitters of coal, did not sign the coal pledge. China owns about half the world’s coal plants and plans to build more. Meanwhile, India is 7th on the list of countries most affected by climate change and relies on coal for 70% of power generation.

Similarly, there are also complications to the agreement to curb deforestation. Preserving the world’s forests is crucial to slowing global warming, as they absorbed around 20% of CO2 emissions over the past two decades. But while the declaration makes broad promises, many countries lack the domestic policy to enforce them. Moreover, many people, like those in Madagascar, rely on clearing forests as their only sources of livelihood. Indonesia backed out of the deforestation pledge on the basis that the agreement was “inappropriate and unfair” and reducing or ending deforestation would interfere with development plans.

While $19.2 billion has been pledged to help conserve forests, this figure is very little compared to the estimated $500 billion per year that countries spend on fossil fuels.

What actually needs to be done

The commitments that rich countries have made to reduce emissions, either in low percentages or only vaguely, will not be sufficient to meet the minimum 80% reduction necessary to keep temperatures from rising above 1.5 degrees. Rich countries like Canada and the United States have repeatedly promised to cut emissions and help fund the transition to net-zero emissions in poorer nations, only to subsequently break their pledges and fail to meet their targets.

Countries that have not signed agreements must also drastically reduce emissions. Since China is responsible for over 27% of greenhouse gas emissions, net-zero targets will not be achievable without their participation. Russia seems unlikely to move away from oil and gas anytime soon and Vladimir Putin did not attend the summit.

There was a lot of talk at COP26 about the importance of working together, mostly from Western leaders. While it’s true that the world will not reach net-zero without a global effort, poor countries are disproportionately affected by climate change caused by the consumption of wealthy nations.

It is easy to point blame at poor countries for refusing to reduce emissions. But the fact that it would be economically devastating for countries like India and Indonesia to participate in efforts to protect the environment is a consequence of colonialism and global capitalism. Furthermore, rich countries have repeatedly failed to deliver on already inadequate funding promises, pushing 2020 financial commitments back to 2025. As Luis Arce warns, a new form of carbon colonialism will only perpetuate an unjust system and keep people oppressed.

To make any meaningful progress on slowing climate change, countries must divest from fossil fuels immediately. Rich countries must also take accountability for their own fossil fuel emissions and pour as much money as possible–an estimated $4 trillion a year–into supporting alternative economic opportunities for those most affected by climate change and funding clean energy.

No climate justice without land back

Changes to the price of carbon, a gradual divestment from fossil fuels, and a switch to some form of green capitalism are not enough. To adequately halt climate change, land must be given back to Indigenous peoples globally. We need to form a new collective and democratic relationship with the land. Major media outlets as well as discussions and agreements at COP26 have highlighted the effectiveness and importance of Indigenous people in protecting the environment, but actions must accompany these words.

While governments and private funders have pledged $1.7 billion to help Indigenous communities worldwide, many countries lack the domestic policy to allow for Indigenous sovereignty. Here in Canada, significant amounts of money are currently being spent policing Indigenous environmental activists. Since 2018, the RCMP has spent around $18 million on specialized task forces to police Indigenous land, water, and forest defenders.

Since the efforts of Indigenous land defenders has reduced Canadian and U.S emissions by at least one quarter, policing these communities is the opposite of what Canada should be doing. As Trudeau makes vague promises to support Indigenous peoples, the Canadian government is simultaneously criminalizing Indigenous land defenders across Canada. They have also spent $23 billion supporting oil and gas pipelines over the last three years, violating the U.N Declarations on the Rights of Indigenous Peoples to do so.

Regardless of whatever measures are actually taken to reduce methane and carbon emissions and curb deforestation and pollution, the methods employed by these states, especially rich nations, will remain in direct opposition to Indigenous sovereignty. As long as police continue to protect state and capital interests, Indigenous communities will not attain sovereignty and the earth will continue to suffer.

Only a rapid, worldwide divestment from fossil fuels will bring us close to meeting net-zero targets. Technologically speaking, this is possible: the obstacles are political and economic. An economic system that relies on the exploitation of workers and the land will never be able to stop climate change.

We have all the funds needed to fund climate projects, but they have to be redirected towards sustainable solutions and supporting Indigenous communities worldwide.

For this, we can’t afford to wait on the empty promises made at COP26. We need mass movements to fight for and support Indigenous sovereignty. And we need to build a reinvigorated working class movement to fight for climate solutions that put people before profits.