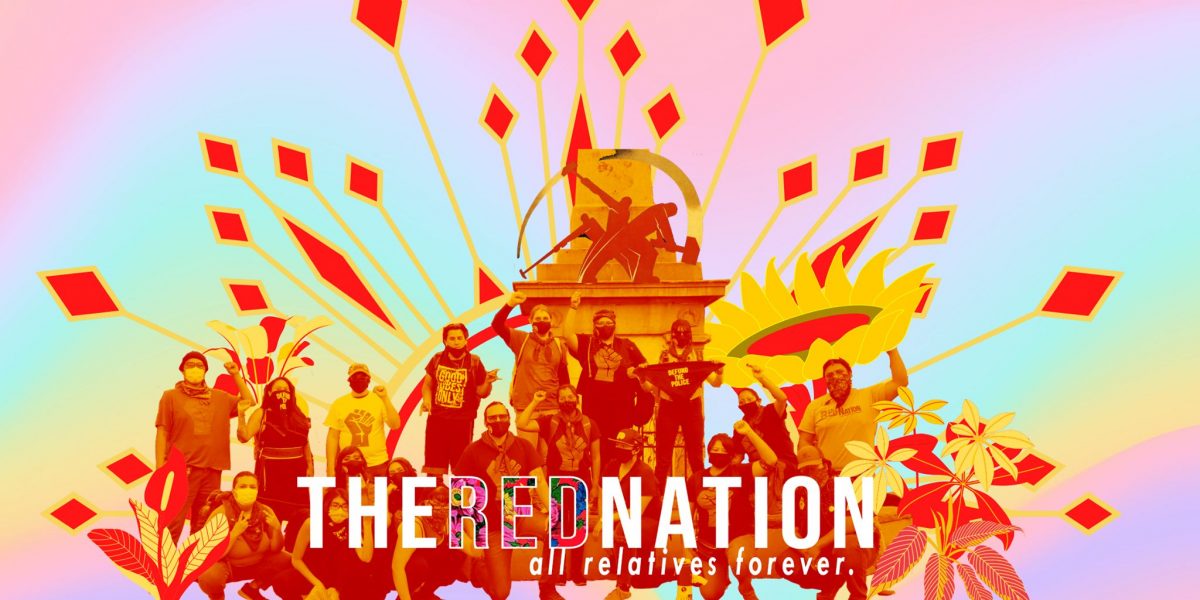 The following are excerpts from an episode of The Red Nation Podcast, where Wing Chief Sleydo’ and Jen Wickham of Cas Yikh House in Gidimt’en Clan of the Wet’suwet’en Nation discuss the ongoing struggle at Gidimt’en Checkpoint against the Coastal GasLink pipeline and RCMP invasions on unceded Wetʻsuwetʻen territory. It is shared with permission from The Red Nation Podcast.

SLEYDO’: I did a keynote address for a gathering of a bunch of non-Indigenous environmental groups and the whole premise of my talk was I have the answer to the climate crisis. Everybody was very interested! And they were excited to hear what my answer was, and basically the whole talk came down to the answer is get behind Indigenous governance.

There is no need to reinvent the wheel. People are trying to figure out “How do we address this climate catastrophe, how do we align our government into making sure that we’re not contributing to the climate catastrophe?” There’s all of these questions, and there’s all of these organizations spending millions and millions of dollars trying to figure out how to survive in the current era when the answer is quite simple: Indigenous peoples have been living sustainably. Our laws are designed from the land—they come from the land—they come from ancestral knowledge of thousands of years of being able to live sustainably on our territories. And yes, these laws will need to be implemented in today’s world. But that’s one of the biggest messages that I try to convey to people: we don’t need to recreate the wheel. We already have all the laws around how to live with the land in a good way and how to do restoration. Our people are experts in restoration. And that’s from thousands of years of learning how to live on the land, which areas to let rest for how many years, etcetera.

We have the answers within Indigenous governance. And if we started listening to the Indigenous folks on the ground… whose land it is—first and foremost… and respecting the decisions of those Indigenous people, we wouldn’t have gotten to this crisis in the first place. And so I think it’s quite simple.

JEN: People don’t have the first clue as to what a hereditary government looks like—who has authority and jurisdiction and who doesn’t—and companies are really playing on that. We don’t have the truth of colonization in our school systems. Everybody who goes through the “training and education system” is really being brainwashed into this fantasy of discovery by the canadian* state. And the whole history of colonization leads us up to this point where people don’t even believe we have a governance structure. They actually believe that the band chief and council system is the system that makes decisions about our territory.

There’s a lot of old colonial tactics that are at work here and it’s just being played out in the modern context of online and in mainstream media, and so it’s really critical for us to be able to put out our own media and get our own voices, our stories, and the truth out there.

SLEYDO’: One of our greatest strengths is that we have been able to show people that our Indigenous systems are still alive and well, and that a lot of people are wanting to get behind that. It has created a mass mobilization across so-called canada and around the world in terms of our traditional systems as Indigenous people and that has empowered other Indigenous people to really stand up and speak up for themselves and to join the resistance against the colonial state.

JEN: Yes, and there’s also these really beautiful and ancient alliances. They are amplifying their divide and conquer tactics on the state media in the microcosm, but in the macro the alliances and relationships built between nations are really strengthening right now. And we’ve seen over the last multiple years the support we have gotten from our ancient allies the Gitxsan and our other neighbours and nations all around here on the west coast of so-called british columbia, and all across so-called canada as well. We have relationships with the Haudenosaunee, the Mohawk, the Mi’kmaq, the Anishnaabe, the Haida, and so many other people all across Turtle Island and the world. And those relationships and alliances are really being brought forward right now.

There’s conversations and more relationship building and planning and strategizing happening within our hereditary governance systems with those nations, and that’s something that the colonial state can’t touch. They can deny its existence, but that’s not going to stop us from working together and taking action together and holding each other and supporting each other to move forward in a way that really empowers our traditional governance systems. They can deny it till they’re blue in the face and that’s not going to stop us. They don’t have tactics that are effective in breaking down our traditional governance. They tried with residential schools, they tried with the potlach ban, they tried with jails, they have tried their darndest to break that system and it hasn’t worked. It’s still alive and well. It has been completely intact through all their tactics of colonization, and that is their biggest fail.

And that is our biggest strength—is relying on traditional governance and the systems that were put in place by our ancestors. We’re still practising today, and that’s going to carry us forward in our future with all of our allies.

SLEYDO’: And people are upholding our jurisdiction, and our laws, wherever they are. So when there’s actions happening, or when people are having discussions about it, they are like “No. Wet’suwet’en law is what we are going by.” They are upholding our law and centring that instead of centring colonial law. There were lots of discussions over the years about ‘the rule of law’ and “we can’t have people disrupting ‘the rule of law.’” No. Wet’suwet’en law is the rule of law on Wet’suwet’en territory. So yes, let’s talk about that. Canadian citizens and citizens around the world: talk about upholding Indigenous law and centring that and prioritizing that over colonial law, which is designed and meant to make more profit for private industries.

JEN: And people are waking up. Especially throughout Covid, it’s become so obvious to the general public how the canadian state has been prioritizing the economy and capitalism over human lives. And it unfortunately takes really devastating and violent actions like we’ve been seeing on Wet’suwet’en territory for people to make those clear connections—between the canadian government, industry, and profit—valued over human lives and the continuation of life on this planet. If they can make a dollar on deaths of the people, they will.

SLEYDO’: Yes. We talked a lot about capitalism, and that’s what this is really all about. We know that the RCMP work for private industry. We know that the governments work for private industry. So let’s attack private industry where it hurts. And that’s through the millions and billions of dollars that are being invested in projects like Coastal Gaslink. For where we are at right now, it’s important for canadian citizens to realise how much they are invested in these projects, and that they can hold accountable their governments, and especially the investors to this project. One of our best strategies for people that can’t be on the ground and doing direct action is holding accountable companies like TC Energy, Inko, and KKR who are the owners of this pipeline. Demand that there’s accountability for where their money is going—with the subcontractors, and especially with the police as well.

UAHIKEA: Boots on the ground. All Out For Wedzin Kwa.

Solidarity with frontline Indigenous land defence struggles requires long-term sustained support, not highs and lows based on media trends. Organize in solidarity with Indigenous land defenders from local solidarity groups: to flyer, to fundraise, to hold actions, to organize in your workplace, and to recruit and train frontline volunteers. See where you are connected with Indigenous-led movements and with the money going to these extractive projects, and respond accordingly. Get approval for your actions from Gidimt’en Clan media coordinator Jen Wickham here. Listen to the full podcast episode on all streaming services at The Red Nation Podcast.

*The decision was made to capitalize Indigenous names for places and use lower case for colonial names in response to the same choice made by Beyon Wren Moor and Wulfgang Zapf in their series Voices: Indigenous Women On the Front Lines Speak. In their words, “this simple visual queue is intended to give authority to the original names and reduce the authority of names used to erase Indigenous presence by the colonial state.”