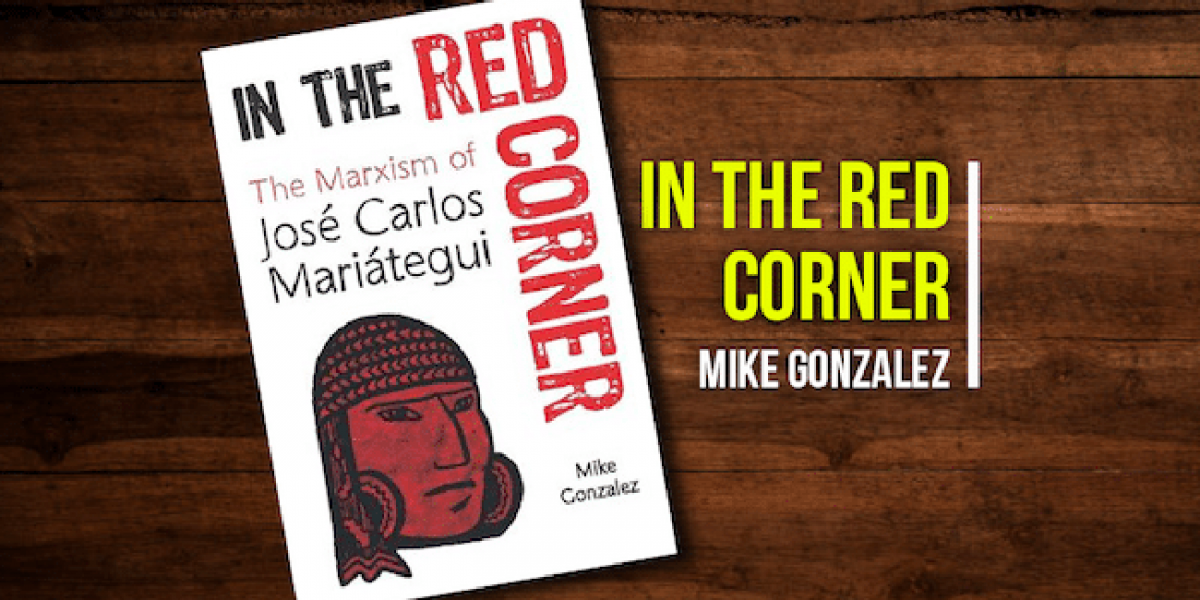 Mike Gonzalez, in his book In the Red Corner: The Marxism of José Carlos Mariátegui has provided a valuable resource for socialists fighting for climate and economic justice today. His book rescues from history the legacy of an inspirational class warrior who was what Antonio Gramsci would have called an “organic intellectual” in every sense of the word. What comes through in Gonzalez’s biography is the sense that José Carlos Mariátegui was very much an Antonio Gramsci for Peru or to put it another way, Gramsci was the Mariátegui of Europe. His Marxism was a “philosophy of praxis,” meaning he applied the core of Marxist political thought to his local content, hoping to support and shape the struggles around him to empower the oppressed and exploited to win their liberation.

José Carlos Mariátegui was born in 1894 in Moquegue, a town 1500 kilometres away from Lima. His mother was a seamstress of Indigenous origins and his father a man of European and aristocratic descent, who abandoned his six children. At the age of eight, José Carlos Mariátegui suffered an injury that would plague him throughout his years and eventually lead to his premature death. It left him homebound for years, where he read voraciously in Spanish and French. He never finished his primary education and was taken on as an apprentice in La Prensa, Lima’s main newspaper. He went from printer’s apprentice to linotype operator and then journalist. He prided himself in being a self-taught man, not university educated, and saw his journalism as a revolutionary tool for working class power.

Gonzalez’s biography focuses on some of the key differences between José Carlos Mariátegui and other socialists at the time: 1) the way in which he applied Marxism to the specific conditions of Peru, 2) his determination that a socialist alternative would have to be rooted in the self-emancipation of Indigenous people and 3) the important role that radical journalism had to play in the socialist project.

“Thought emerges from practice, from life, and not the reverse”

Gonzalez writes José Carlos Mariátegui’s most famous phrase, “Our revolution cannot be an imitation or copy. It must be a heroic creation, an epic struggle to create a new world,” as evidence of a trait that would bring him into conflict with many other Marxists at the time. Mariátegui, who was present at the founding conference of the Italian Communist Party and learned much of his Marxism during his time in Italy in that period, was committed to applying the Marxist method to his local conditions. When he returned to Peru in 1923, he dedicated himself to the publication of Amauta, a magazine that could provide a platform for political debate between different left currents and to the building of a working-class movement.

As Gonzalez notes, “In Italy he had seen the potential power of an organized and militant working-class movement, and the contribution of a revolutionary newspaper to its development.” He also saw the problems of the Italian movement and why its 1919 workers’ occupations hadn’t gone further and been more successful: “a lack of preparation.” For Peru, that meant creating “an organ of information between the Peruvian working class and the international proletariat” and developing the intellectuals of the working class movement.

José Carlos Mariátegui’s belief that the “vanguard of the movement must arise from within it, that thought emerges from practice, from life, and not the reverse,” meant that he prioritized raising the class consciousness of the working class movement over the building of a specific organization. Hence, why he insisted Amauta be a publication where different, sometimes competing ideas, could debate the way forward in service of the movement as a whole. As Mariátegui put it: “we have more urgent tasks [than being divided by labels and titles]. The working class movement is still incipient and our job is to raise class consciousness and class feeling there. Our duty is to resist reactionary attacks, and repression, to defend workers’ organization and the workers’ press, and to support the demands of the oppressed and enslaved indigenous people. And in doing that we will come together, whatever the final objective.”

In searching for that objective, Mariátegui emphasized the unique position of Latin America, insisting that the European experience could not simply be replicated there. He called for a united front of industrial workers, miners, peasants and Indigenous communities. Key to Mariátegui’s thought was the idea that, as Gonzalez puts it, “the Latin American reality, and the Peruvian reality in particular, demanded a Marxism able to respond to very different externalities from Europe. Mariátegui didn’t propose a different revolutionary subject, but rather a broader perception of that subject in which social layers and classes could identify with and participate in the social revolution impelled by the laboring classes, the proletariat.”

This idea has been key for understanding revolt and resistance in the global south. From Tunisia to Sudan, revolutions have involved the de-classed and proletariat from the informal economy in their movements. Mariátegui was an intellectual but he was above all an organizer. He used Amauta to help build a network of solidarity in support of striking miners in Morococha, the peasants of the Central Valley, and indigenous communities, helping to organize the first Indigenous Congress of 1924. Mariátegui saw one of the central roles of Amauta to “deepen and extend the links between Indigenous mobilization and the workers’ movement.”

This task is critically important to today’s social movements for climate justice, Indigenous sovereignty and economic justice. Linking the fight for green jobs and decolonization is a huge threat to the ruling class and essential to win a true freedom. Gonzalez emphasized that key to Mariátegui was that “the indigenista movement, for all its positive and human instincts, must move from a philanthropic and charitable perspective to a vision of the Indian as the subject of revolution. And that required an acknowledgement of the history of Indian struggles and resistance, and an understanding of the material causes for the conditions of the Indigenous communities.”

In Seven Interpretive Essays on Peruvian Reality Mariátegui condemned the successive waves of colonial violence. “Spaniards established a system of forced labor and uprooted the Indian from his soil and his customs..When not Indian, the agricultural worker of the Peruvian coast has been the Negro slave and the Chinese coolie, who are, if possible, held in even greater contempt. The racial prejudices of the medieval aristocrat and the white colonizer have combined in the coastal latifundista.” But he stressed the ongoing resistance of Indigenous communities: “In Indian villages where families are grouped together that have lost the bonds of their ancestral heritage and community work, hardy and stubborn habits of cooperation still survive that are the empirical expression of a Communist spirit. The ‘community’ is the instrument of this spirit. When expropriation and redistribution seem about the liquidate the ‘community’, indigenous socialism always finds a way to reject, resist, or evade this incursion.”

Resurrecting this understanding is important for socialists today. The land is intimately connected with the social ideas of community and the collective, and socialism could counter the fragmentation and individualization experienced under capitalism. His experiences of applying the principles of Marxism to his reality in the global south meant that José Carlos Mariátegui defied the wishes of Moscow and the Communist International and insisted on a revolutionary strategy of socialism for Latin America, integrating Indigenous communities into a socialist alliance led by the working class to socialize the land for the benefit of industrial workers and peasants.

Gonzalez’ political biography of José Carlos Mariátegui is useful for socialists looking for further ideas on how to build the forces that can counter the exploitation and oppression of the capitalist system. The book’s detailed descriptions of Mariátegui’s focus on connecting Indigenous communities with the labour movement, revolutionary journalism and applying Marxism to his local context will definitely help readers think deeply about their own work.