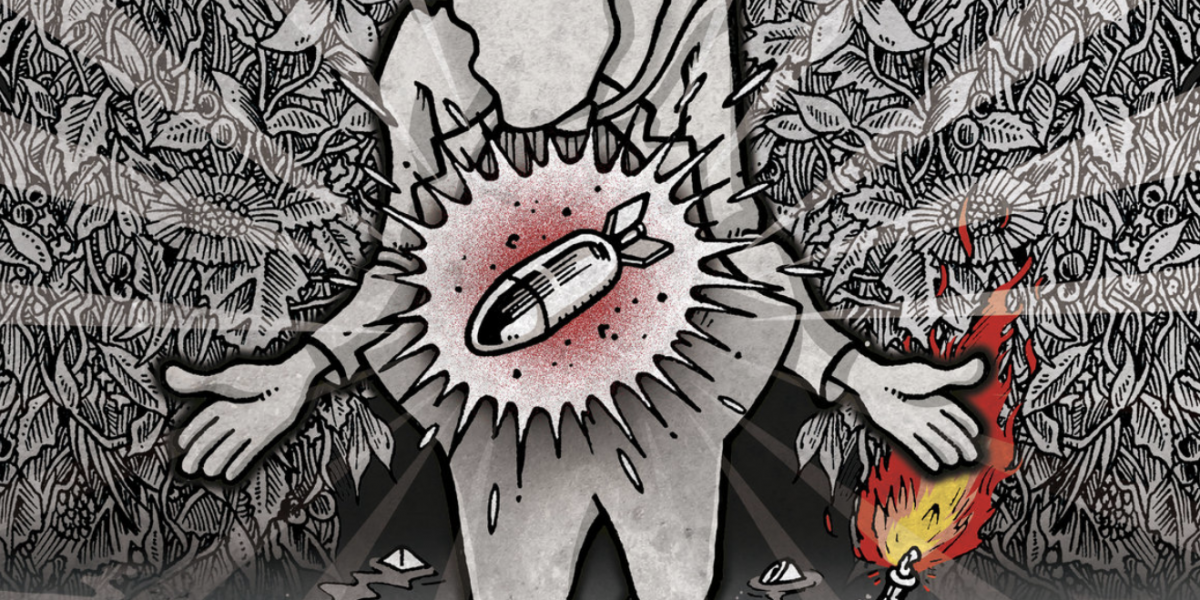 It would be through no fault of your own if you thought ska-punk went the way of chain wallets and MTV-produced movies. The genre itself was incredibly infectious, but overplayed during its heyday. It rarely addressed important issues such as race and oppression in the way that the first-wave or two-tone movements of ska did.

Still, many stalwarts of the genre are going strong, and some deciding that 2020 is the year to make a comeback. Revolution Spring is the latest release by Detroit’s Suicide Machines. It’s been a decade and a half since we last heard from the group, releasing War Profiteering Is Killing Us All. The album was focused on the frenzied patriotism created by Bush and the war in Iraq. With Trump now at the helm, this seems like the perfect time for a new release from the band. When asked about the meaning behind the albums title, vocalist Jason Navarro says “It represents the change inside of me… it’s me thinking about springtime as rebirth.” So, is this rebirth worth checking out, or something that was best left in the past?

The overall general themes on the album are of a feeling of being lost, confused, angry, and upset. There is, however, an underlining optimistic outlook of fighting for change. In many ways the energy that accompanies the anger and confusion throughout the album comes across as a sincere form of hopefulness.

“You wouldn’t think this would be the case with the way the world is looking now,” Navarro admits. “But I’ve become a lot more positive about things. And I stopped pointing fingers and started doing things instead – I feed the homeless a couple of times a week with a bunch of friends of mine, I’ve protested against ICE here in Detroit, I’ve done things locally like water drives for Flint – and I feel like doing these things has created more positivity in my head, whereas before I was being pissed off and not doing anything.” All of these feelings permeate the entire record.

Revolution Spring starts with a bang! The opener, ‘Bully in Blue,’ sounds like something off of one of their early albums. The track is a melodic banger focused on police brutality, with a few great lyrics that ask the listener to really think about their own place and privilege in society and how their silence in-fact supports racist societal structures. It’s the perfect introduction to the album as it really sets off the mood in a great way. If there was a place for ‘whoa-whoa’ choruses and stage dives, this would be it.

‘Flint Hostage Crisis’ is another incredibly powerful track on the album. Musically, this track is pulling from ska crust groups like Capdown and Leper, using an oppressive-sounding chord progression and vocal delivery to capture the sense of anger and fear of the song. “She spent 40 years in that factory / The one that kept quiet and looked the other way / They put profit before people instead for rusted out parts / Children don’t smile here and it’s breaking my heart.” And with an outro of “This is what class war really looks like,” it’s not hard to see where these Detroiters stand on the issue of equity and class dynamics.

The album continues with track after track of incredibly thoughtful and solid tunes. Musically, it also has the same sonic delivery of many Less Than Jake albums, which should come as no surprise as the album was co-produced by LTJ vocalist and bassist, Roger Lima. ‘Detroit is the new Miami’ is a melodic hardcore track about climate change and the systemic drives that is making the crisis worse. The song features a great gang vocal chorus of “Don’t believe that the world is burning / You’ll burn it down to keep all your earnings.” ‘Potter’s Song’ is perhaps one of the more articulate and pointed tracks on the album. The song itself is a re-work of ‘Defiant Culture” by Break Anchor. It’s a bass-forward poppy track that wouldn’t sound out of place on a Greenday album.

‘Cheers to ya’ closes out the album with a really personal look at the general feelings of pessimism and helplessness many people feel in their day-to-day. When fear of eviction, police attacks, climate change, and systemic oppression are faced at every corner, many feel that they have nowhere to turn and fall into despair. It is these feelings that carry most of the album and are really summed up with the closer.

Despite all of the ‘negative’ emotions of the record, this sense of being overwhelmed can lead us to action and organization. That’s what the track ‘Impossible Possibilities’ is aimed at accomplishing. This is easily my favourite of the album. It’s anthemic two-tone ska track, not unusual for the band, not a standout on the record. It really touches at heart of what a lot of people are feeling and going through. The opening line? Buddy, the delivery hits you right in the gut. ‘I’m overwhelmed, what can I do?’ The song might come across as a generic call for change, but there are certainly some great lines to dig into. ‘Can you imagine what this could become / With hope and love and a little communication? / Can you imagine what this could become / With unity, fire and inspiration?’

It’s great to see such an awesome record come out in 2020. Not only are The Suicide Machines still a force to be reckoned with, their sense of emotional clarity and energy is more than a little addictive. If you haven’t listened to the band since the 90s or have never given them a chance, this is the perfect time to jump in. They offer an aggressive and upbeat take on spiralling through anger and despair, but plant themselves and the listener in a place of organization, action, and hope.

The album can be ordered in both digital and physical formats.