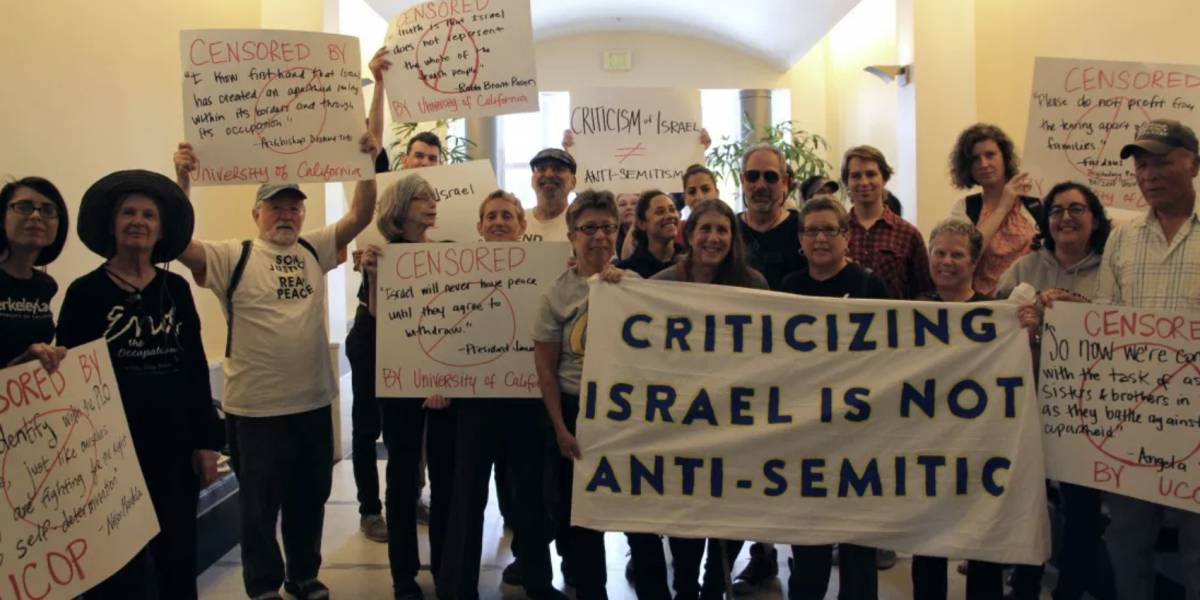 Back in August, Barrie, Ontario Mayor Jeff Lehman put forward a motion for the city to adopt the International Holocaust Remembrance Alliance (IHRA) working definition of antisemitism. Within a few days, after facing a swift backlash from community members and anti-racism and human rights advocates, he dropped it and it was never put to a vote.

Corey Balsam from Independent Jewish Voices Canada, a grassroots organization that advocates for justice and peace for everyone in Israel-Palestine, was one of the people who led the charge to stop it. He thought the issue had been put to rest – at least for a while – so he was surprised when the mayor’s motion appeared again at the September 14 general committee meeting. It unanimously passed and was expected to pass a final vote of council on September 21.

Statistics show that antisemitism is on the rise in Canada and around the world. It needs to be strongly fought in solidarity with all struggles for equality and human rights. But, while well-intentioned by members of Barrie council, the move to adopt the IHRA definition is also part of an organized campaign to discredit and damage critics of Israel and its right-wing government.

“This is just the latest iteration of those attempts,” Balsam says. “What is clear is that there’s a lot of resources being put into this by groups that lobby on Israel’s behalf around the world, as well as by Israel itself.

“This is a definition that is being weaponized; it’s being used mainly as a means of shutting down foundational criticism of Israel. What that means is not criticism of a particular policy or even things necessarily like Israeli house demolitions of Palestinian property, but really the people challenging Israel’s nature as a state that privileges one group – officially and institutionally – and discriminates institutionally against another. So, Jews on the one side and Palestinian Arabs on the other.”

Here’s the definition in question: “Antisemitism is a certain perception of Jews, which may be expressed as hatred toward Jews. Rhetorical and physical manifestations of antisemitism are directed toward Jewish or non-Jewish individuals and/or their property, toward Jewish community institutions and religious facilities.”

Balsam says this base definition is basically meaningless. It is extremely vague and adds nothing to the conversation.

“We object to the definition itself as people actively fighting antisemitism because it really doesn’t help and it really just confuses people,” he says.

The harmful aspects of the definition – and what makes it so dangerous – are the examples that accompany it. There are 11 of these illustrative examples of what the IHRA says is contemporary antisemitism, seven of which mention Israel.

“There are a few in particular that are especially problematic,” Balsam says. “One that really is used in these attacks is the one that says, ‘denying the right of Jews to self-determination’ – for example, considering the establishment of Israel a racist endeavour. That is read to imply anti-Zionism, which is interesting. Anti-Zionism, in general, is something that is linked very closely with anti-racism. And just by suggesting that those who are critiquing Israel as being racist as themselves being racist is quite racist in itself.

“A lot of people would consider the establishment of Canada – and the establishment of many countries – to be racist, and most of us will agree with that, given Canada’s history with respect to Indigenous peoples. And a lot of Jews would agree that the foundation of Israel was racist to begin with, especially against Palestinians, but also in many ways against non-white Jews from Arab countries or from Ethiopia.”

And this is the problem with the IHRA definition. Those who are engaged in campaigns to challenge Israel or its government’s policies are being labelled as racists and antisemites.

Balsam and his colleagues at Independent Jewish Voices spend a lot of their time these days fighting the campaign to have governments of all levels adopt the definition. Some have, while others – including Toronto, Montreal and Calgary – have said no. At the provincial level, the definition has passed second reading in Ontario, while the federal government has added it to their official anti-racism strategy.

“I think it’s quite clear that there is a major lobbying effort to have (governments) adopt it,” Balsam says. “I think it is something that is attractive, especially to the right, as a wedge issue. They can use it to say, ‘We are the ones who are opposing antisemites, and all those progressives on the left are antisemites if they don’t support this’.

“In places like Barrie, they’d rather not have these conversations; they’d rather not address these issues and get in the middle of this. But they feel that pressure that if they don’t follow through with this, then they might be labelled antisemitic, so they might as well just pass it and hope for the best.”

The work of IJV and other groups is part of a critical effort to counter the focus of pro-Israel lobby groups on the political left, and, as Balsam says, the instrumentalization of the fight against antisemitism to simply silence critics of Israel. And to fight what has become a distraction from the real work that needs to be done.

“It goes counter to anti-racism work. I think it’s anti-anti-racist,” Balsam says, half-jokingly. “We’re encouraging legislatures across the country and others to adopt a comprehensive approach to dealing with racism and not just focusing on antisemitism, which is one form of racism.

“This is delegitimizing the Palestinian narrative. A lot of supporters of the IHRA definition will say, ‘Well, the vast majority of Jewish organizations are supporting this definition and we should be able to define our own oppression’. As a general principle, that makes sense. But when said definition of oppression is actually negating and in some ways even contributing to the oppression of another group, we need to pay attention very closely to that and challenge it.”

Supporting the IHRA definition has consequences, something Balsam says politicians need to keep in mind when they vote in favour of adopting it.

“They need to know that by supporting something like this, they’re contributing to something much bigger and something much more nefarious than the vote in their own city,” he says. “It’s part of a much larger project to delegitimize Palestinian and pro-Palestinian voices. That needs to be very clear. They need to be willing to deal with the consequences. If they are someone who is sympathetic, then they need to also be prepared to face attacks in the future based on pro-Israel groups using that definition as leverage. That’s what we’re seeing in a lot of places.”

To listen to Michael Speers’ full interview with Corey Balsam, check out the latest episode of the Struggle in the Suburbs podcast.