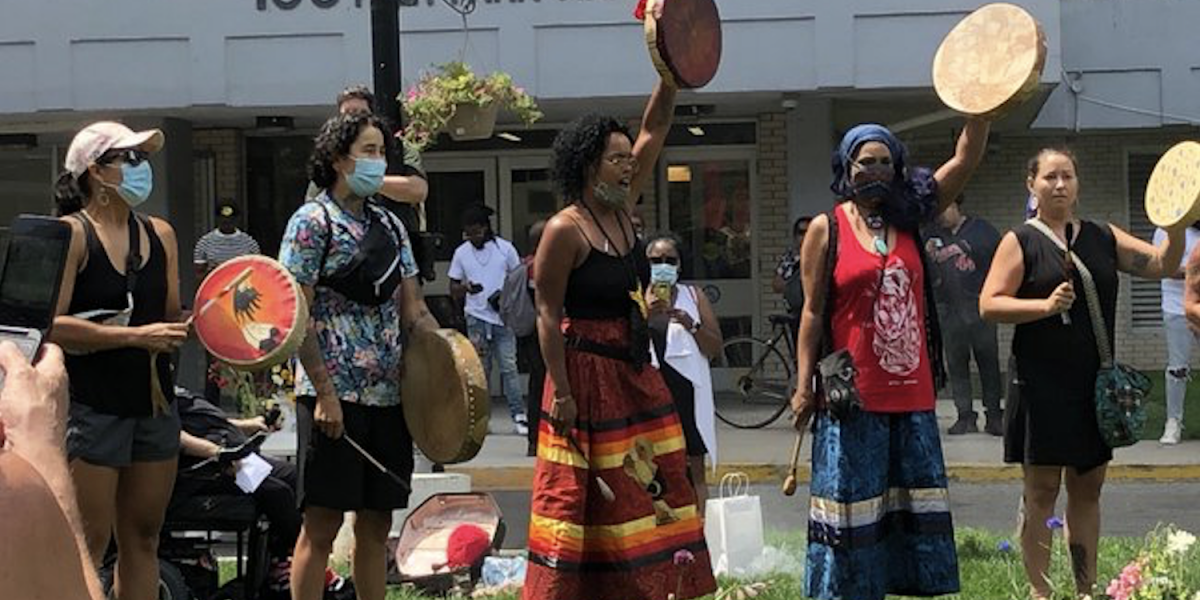 29-year old Regis Korchinski Paquet died on May 27 while with the Toronto police, when she “fell” from the balcony of her high-rise apartment, dozens of storeys to her death. Her mother had called 911 hoping that her distraught daughter would be brought to a mental health facility for safety. Instead, a number of police officers came into Regis’ apartment and refused entry to her mother. Within minutes Regis was dead.

Almost two months later, her family and members of the community came together for a three-part event in her honour – a memorial service in front of her home, a march through nearby High Park, and a celebration of life in a shady field in the park itself.

Well over 400 people took part and police were kept at a distance (a few blocks away, directing vehicular traffic away from High Park Avenue).

Regis had a mixed background and the event reflected this. She is part Mi’kmaq, and this Indigenous part of her background was celebrated in the drumming, songs and inspiring, hopeful words by Mi’kmaq Elder Wanda Whitebird prior to the family’s arrival.  In a very poignant moment, Regis’ family arrived walking in front of a horse and carriage, which carried Regis’ coffin. The memorial was moderated by her church leader, Pastor Dawson and included prayers, songs and appeals for fairness. MPP Jill Andrew repeated the call for justice by many, in the form of an inquiry into Regis’ death, fully independent of the police, instead of the police inquiry currently underway.

Before the crowd left for the march, the family released 29 doves from the spot on the ground where Regis died, a sign of hope for peace and release.

The march through High Park was facilitated by Black Lives Matter, with lots of chanting “Say her name: Regis Kornchinski Paquet”, “Justice For Regis”, “Black women’s lives matter here” and other familiar calls to action.

The march ended in a celebration of Regis’ life.  There were still hundreds of people in attendance, and the organizers were playing recorded dance music, providing food and beverages, with live music performances and speakers to follow.

This was the first of what will be an annual “Regis Korchinski-Paquet Walk for Justice”.  We must fight to ensure that before next year’s walk there is a fully independent inquiry into her death.  And we must continue the struggle to defund, dismantle and abolish the police so that the murders by police stop, and community members can live safe, healthy lives.