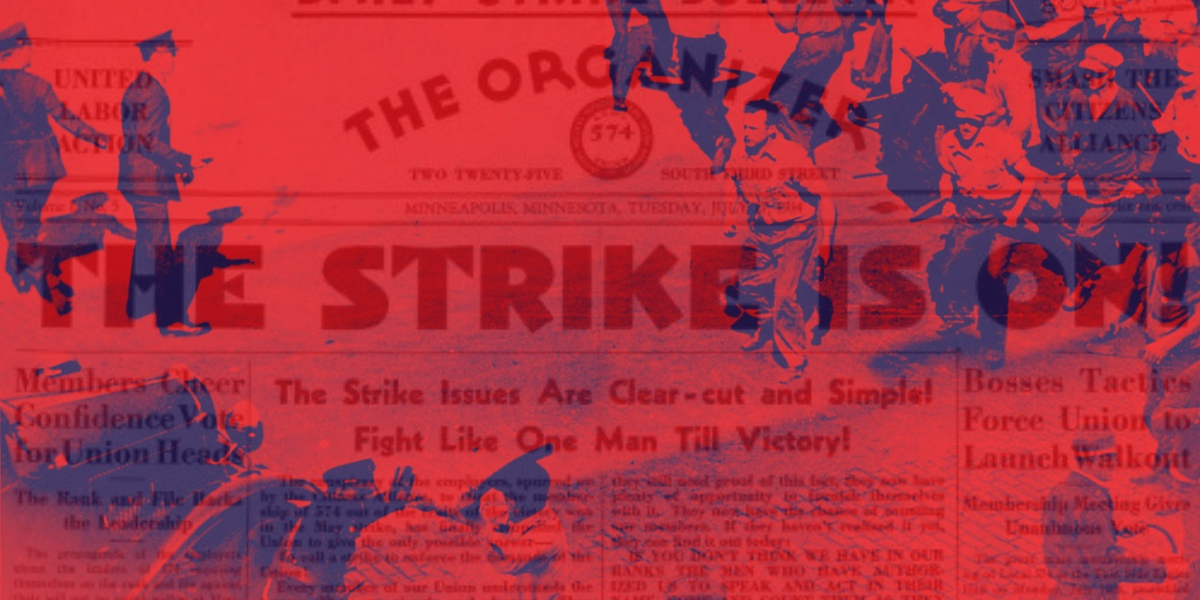 The spectre of socialism is haunting the ruling class. Increasingly used to invoke fear and hatred by both the right and centre, recent polls show that nearly 4 in 10 Americans prefer socialism to capitalism. The figure is roughly 50% per cent for people under 35. The rise of leftwing politicians like Alexandria Ocasio-Cortez and Bernie Sanders, the threat of Trump and the alt-right, the massive fightback against racist police violence, and the obvious inequality of the pandemic have challenged the existing establishment and raised the popularity of alternative visions for society like socialism.

But while the current interest in socialism is certainly good news, it raises a host of questions. What is socialism? How do we get there? What should socialists be doing right now to help make it happen? On these questions, Bryan D. Palmer’s Revolutionary Teamsters is a great place to start.

Palmer tells the story of a small group of Trotskyist activists in Minneapolis who helped change the course of labour history in America. The group, organized as the Communist League of America (CLA), saw socialism as the remedy to the ills of capitalism. They saw socialism as the product of the radical collective action of the working class to replace capitalism with a system based on the collective ownership of the means of production, for human need not profit. The story of Minneapolis in 1934 is the story of how a small group of like-minded socialists took concrete steps to try and advance towards their vision of a socialism.

Through a series of militant strikes the workers took on police, a left-wing Farmer-Labor Party governor, the National Guard, scabs and hired goons, Teamster National Leadership and the entire ruling class of Minneapolis in often violent confrontations and political battles that won union recognition and substantial wage raises for hundreds of new workers. Palmer writes: “The truckers’ strike of 1934 galvanized the entire spectrum of Minneapolis labour – skilled and unskilled, unemployed and waged, craft-unionist and unorganized, male and female – and polarized the city in opposing class camps” and it made it possible to organize nearly the entire trucking industry across the Midwest.

Revolutionary Teamsters is a story of heroic working class resistance, but even more than that it is a detailed analysis of the potentially decisive effect that political leadership can have in winning.

Minneapolis was a city whose business class was organized in the ruthless Citizens Alliance and bragged about being a non-union town. The struggle of 1934 took place over union recognition in unorganized coal fields. The prevailing climate of unions at the time was a narrow craft-unionism that sought to make peace with the boss and organize only “skilled” workers, mostly ignoring racialized and immigrant workers. Minneapolis truck drivers local Teamsters 574 had 75 members ( including a few members of the CLA) and broke with the prevailing craft-unionism at the time to help organize into their local workers in non-union coal fields including inside workers, shovelers and other workers involved in the coal business in Minneapolis.

The Minneapolis Trotskyists also set their sights on organizing the unemployed, giving a new lease on life to the city’s unemployed workers movement when they helped to launch the Minneapolis Central Council of Workers (MCCW). The organization was an attempt to build a broad united front that could “unite around a common agitation-programme the unemployed, local unions, and cooperatives, as well as the Socialist Party, the Farmer-Labor Party, and the CLA. With the purpose of coordinating the struggles of both the employed and unemployed workers.”

The CLA members and their close political allies played a leading role in the project. Because they had a vision of the revolutionary transformation of society, their idea of working class organizing extended far beyond the one or two coal fields and few drivers that were in 574. They wanted to raise the level of struggle and build working class power. Therefore, their trade unionism meant organizing unorganized workers and, contrary to the narrow unionism of the Teamster bosses, raising expectations and helping those workers see that only through their collective strength would it be possible to win.

Local 574’s strikes were waged without the support of the American Federation of Labour (AFL) officialdom. Instead, the Trotskyists of the CLA hoped to raise the confidence and combativeness of the rank and file to the point where they could trust in the strength of the members rather than having to abide by the low horizons of the union officialdom. To achieve this, they needed mass, democratic participation. They had an organizing committee, but as  CLA leader James P. Cannon noted “none of them were, in fact, officers of the union.” Rather they were a “sort of extra-legal body set up for the purpose of directing the organization campaign, undertaking their coordination of the strike virtually over the head of the official leadership of the union.”

The Trotskyist activists of the CLA had a vision developed over discussion for several years of how to empower rank-and-file workers in the union to challenge the leadership, who were content to keep the General Drivers Union 574 small and ineffective. As Palmer details, “their crucial contribution to the 1934 industrial-union drive was to establish rank-and-file committees among all sectors of the trucking industry, so that the coal-yards, drivers and helpers, gas and oil-workers, market and food-store workers, warehousemen, shipping-room employees, packers, checkers, weighers, dispatchers and counter platform workers were all involved in the development of the union and the formulation of strike-demands.” They worked hard to make sure that the bulk of workers fighting for union recognition and better pay were invested in the demands and felt ownership over the fight.

Imperative to this was building up the confidence of workers that they could be political actors and that what they did would make the difference between winning and losing. “Beyond working to neutralise conservative labour-leaders and to develop sympathy, support, and material aid among other unions, the Dunne brothers, Skoglund and Dobbs [CLA members in local 574] missed few opportunities to develop allies among the rank-and-file. The informal organisation-committees became a training ground for strike-leaders, and old hands among the Trotskyists worked with younger, up-and-coming militants to develop speaking skills among the volunteer-organisers who showed signs of oratorical promise.”

The vision of the CLA leaders was always to broaden and strengthen the support for the truckers’ demands. Rather than relying on official union leadership to finesse the best deal, the Trotskyists saw their strength coming from the members ability to stay strong, stop goods from being moved throughout the city, and continue the strike. This perspective led to the creation of Women’s Auxiliary Strike committees by spouses and family of truckers and women CLA activists. These committees had the dual effect of strengthening the strike and challenging sexist gender roles in the Minneapolis working class.

The role of a revolutionary party

The fact that this rank-and-file perspective could be implemented owes to the organization and coordination that the CLA had created in Minneapolis.  Trotskyist militants like Ray Dunne and Carl Skoglund were organized around a set of politics, revolutionary socialism, that saw the working class as the key to a better world. They spent years patiently explaining their understanding of the world and what it would take to make it better for themselves and their coworkers. Through a climate of anti-unionism, complacent Teamster leadership and vicious employers, they spread their message to individual co-workers and tried to find political followers and allies who would help them to make their vision of class struggle come to life.

As Palmer writes, “they managed to convince a few followers of the righteousness of their cause, but, along the way, they were jeered at by workers and bosses alike, and, in the worst of times, fired for their public political stands. Biding their time, these patient revolutionaries gambled that those workers they had managed to draw into their circle of militants were but the tip of an iceberg of proletarian discontent. Their wager, backed by the knowledge that they had won some staunch figures like Farrell Dobbs, Marvel Scholl, Harry DeBoer and others to their ideas, and shored up by a judicious sense of the temper of the drivers and others associated with trucking in Minneapolis, paid huge dividends.”

Their patience paid off as they were able to expand the influence and reach of their politics many times over. By being organized around a set of ideas that emphasized struggle over conciliation and working class agency over bureaucratic diplomacy and an organization that could help push in the same direction, what began as a group of less than a dozen Trotskyists soon commanded an earned influence over thousands of 574 members, tens of thousands of workers, the unemployed and other supporters.

The CLA gained influence because it had the politics to be able to navigate the terrain of class struggle, both teaching their fellow workers and learning from them. And this won many to their organization.

The role of a revolutionary publication

One of the reasons they could be so organized was because they had a revolutionary newspaper, The Militant, to organize around. The newspaper of the CLA, during times of relative labour peace in Minneapolis, helped Dunne and others propagandize, find other militants, politically educate fellow workers, and generally help develop organization that would serve them so well during the rebellion of 1934.

Many of the CLA’s editorial staff who worked on The Militant would go on to help found The Organizer, the paper of Local 574. Cannon and his fellow Trotskyists knew the necessity of having their own means of communication to counter the bosses and government, and that foresight paid off and played a decisive role in the strike’s victory.

During the strikes of 1934, The Organizer became a daily bulletin; its pages were a source of information, humour, political education and equipped workers in 574 and beyond with the arguments to defend their working class interests. Cannon, who helped produce the Organizer, remembered “the morale of the strikers was kept up by The Organizer…the striking workers were armed and prepared in advance.” It was a powerful tool for political education and Cannon described it as “the greatest of all the weapons in the arsenal of the Minneapolis strike. I can say without any qualification that of all the contributions we made, the most decisive, the one that tipped the scale to victory, was the publication of the daily paper.”

Production and distribution of The Militant helped create the scaffolding of the CLA, keeping them organized and expressing and clarifying debates in the workers movement. In turn, this organization made it possible to produce The Organizer, a key weapon in securing victory for the workers of Teamsters Local 574.

Bryan D. Palmer wrote this book very explicitly with the message that the lessons of what happened in Minneapolis should be applied today. As thousands of new people look towards socialism as an alternative to the capitalist system, Revolutionary Teamsters makes an absolutely vital contribution to explain how we can get there. It clearly shows the way in which a small group of revolutionary workers could help shape history by breaking down barriers between organized and unorganized workers, building rank-and-file workers power that could articulate demands and fight for them with or without the support of union leaders, and the way the class struggle can transform history and the workers themselves.

In looking for a singular enduring understanding from the Teamster conflict, Palmer emphasizes  “the necessity and possibility of rebuilding the kind of revolutionary organization that can simultaneously nurture a creative leadership and encourage and develop the militant combativity of the working class.”  This dialectic of leadership was obvious in the Teamsters struggle and is necessary if we are to secure a better world. This book should be read, studied, shared and applied by all those who have socialism as their goal.