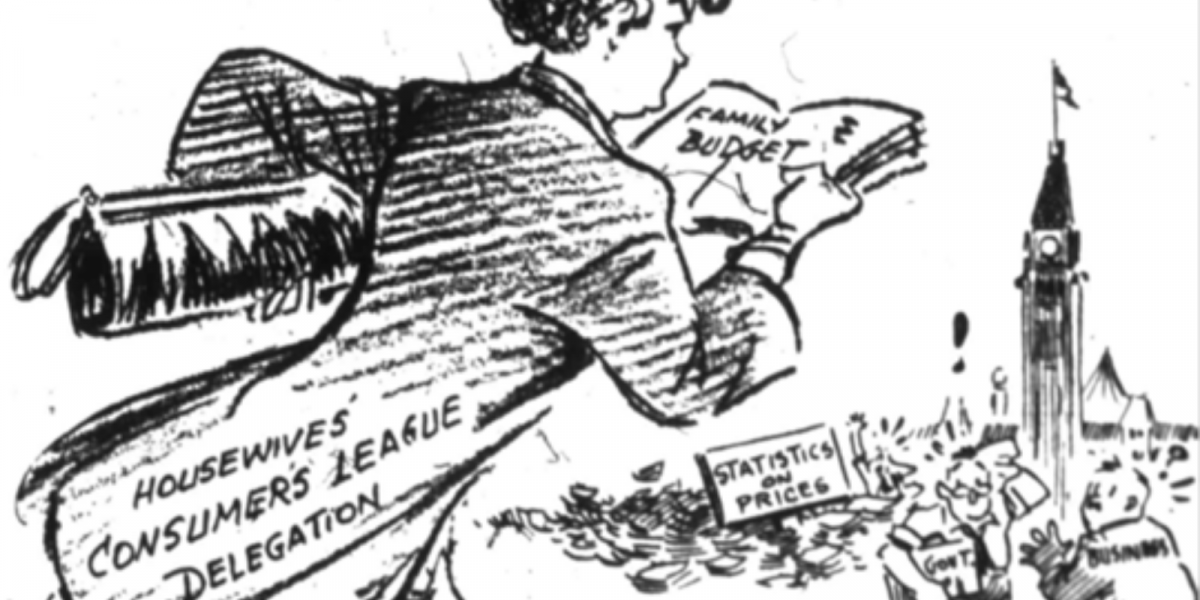 RADICAL HOUSEWIVES is a play about the struggles of Toronto housewives in the 1930s and 1940s for lower food prices, and about the weight of the Cold War that brought them down. It is being presented at the 2022 Mayworks Festival by The Toronto Workers’ Theatre Group (part of the Toronto Workers’ History Project. Spring Magazine spoke to Craig Heron, the play’s writer, about the politics informing this play and the legacy of the radical housewives movement. Craig Heron is a retired historian and president of Toronto Workers History Project.

Can you tell me how the Toronto Workers’ Theatre Group ended up putting together this play about the radical housewives?

Few years back, the Toronto Workers History Project came up with an idea that we thought would be useful to help us celebrate the 100th anniversary of the Russian Revolution. We had so much fun that we continued to do a series of relatively short plays and then some longer ones too that focus on particular themes.

We had discovered this book by Julie Guard called Radical Housewives: Price Wars and Food Politics in Mid-twentieth-century Canada and it looked like such a fascinating story about these women from the late 1930s to the 1940s who organized against high cost of living and then a wider range of issues that they were concerned about.

Just to give a context, the price had gone from 10 cents a quart to 13 cents a quart, and the housewives were just horrified that milk was going to cost that much. There was this one instance where they just phoned and phoned and phoned to campaign to get people to boycott butter in 1938. And they had amazing success.

Could you talk a bit more about the political milieu of 1940s Toronto?

In 1937, just before World War II, Canada had pretty severe unemployment, and there had been a decade of organizing from all segments of the left and some union organizing too. Some of the women who got involved in the Toronto Housewives’ Consumer Association had some political experience  – one of the prominent ones would be Rae Luckock, who would become part of the Co-operative Commonwealth Federation (CCF) caucus at Queen’s Park in 1943. She was one of the first two women ever elected to the Ontario legislature, along with Agnes MacPhail. Rae Luckock was at the founding meeting of Toronto Housewives’ Consumer Association and she was very central to it.

But many women involved in the group had no political experience. For example, the first pregnant woman and her group of friends who called the first meeting had no political experience and very quickly they got freaked out by working with all these lefties. So part of the story is that within a year, the movement had to deal with an internal battle that resulted in that woman and her crowd leaving and disappearing.

The radical housewives were coming out of a nonpartisan left field view, where the most important organizers were women who got involved and had no political experience. And one of the main things that I wanted to drive home about this is that these are the kinds of women that are usually assumed to have no time to be politically active. They’re “supposed” to be at home. And yet they organized this amazing movement that was overwhelmingly married women with kids and families. And, you know, these women were masters of getting signatures on petitions and holding demonstrations and organizing boycotts.

So the wartime environment became a hothouse for the movement. Partly because unemployment dried up, everybody had jobs, and the economy was booming. Everybody was doing a bit better than they’d done for quite some time. And these women were very concerned whether this would lead to more price increases. And the government was worried about that too, from what happened in World War I, and clamped down on price controls. But who was going to actually monitor them? Well, the radical housewives organized to get hundreds of volunteer women who go and do price checks with their little blue blue books.

It was a wonderful moment of injecting a sense of citizenship for the women who felt pretty marginalized politically up to this point. By the end of the war, they had a real sense of political entitlement because they had made such a contribution to the war at home and then they were horrified that at the end of the war, the government wanted to wind everything down, get rid of price controls, and open up the economy again.

How did the Cold War impact the radical housewives’ movement to maintain price controls?

The group organized major campaigns. They were not alone on this: the labor movement and parties of the left are saying the same things. But the housewives are the ones who were actually out there organizing big demonstrations that made some impact.

The RCMP got more and more worried that they’re a communist front – and that’s the word they were spreading around as much as they could. In 1948, the housewives went to Ottawa with a petition with over 700,000 names on it, calling for the continuation of price controls after the war. There were only 13 million people in Canada at that time so getting over 700,000 names is really pretty impressive. But the government wouldn’t even accept them because they were denounced as being communists.

The context had changed by 1948 when the Cold War was in full flight. This organization became one of the victims of an era when there were so many confrontations over almost any left wing activity. What the play points out is that the CCF, which had been very supportive all along of this movement, backed out and said the group is communist led.

What lessons from the radical housewife movement would be relevant in our current time?

There’s so many ways to answer that question. We developed the play during the first wave of the pandemic. It was very clear to us that at that moment in 2020, government intervention really mattered and especially around health. And suddenly the play was very relevant because it illustrates how important it is to make sure that something as basic as guaranteeing food security and the price of food is something that the government should take very seriously and not allow to just run wild in the private sector. And this of course is what stimulated the original organizing in 1937 when prices were out of control.

As we worked on this play over the last two years, what became clear is that we are in the midst of another price wave. Right now, prices are skyrocketing, inflation is taking off again. And it’s not hard to imagine that we have a moment right now that would lead people to do what happened in the 1940s.

It’s an inspiration to know that working class women without a lot of money, looking after their kids, and their old grannies, were able to get the kind of political attention with minimal resources. It should encourage us to think about how it is possible to organize around very important issues in our lives and get results.

RADICAL HOUSEWIVES is playing as part of Mayworks Festival from May 3-8, 2022 at 25 Cecil St for free. You can book tickets here.