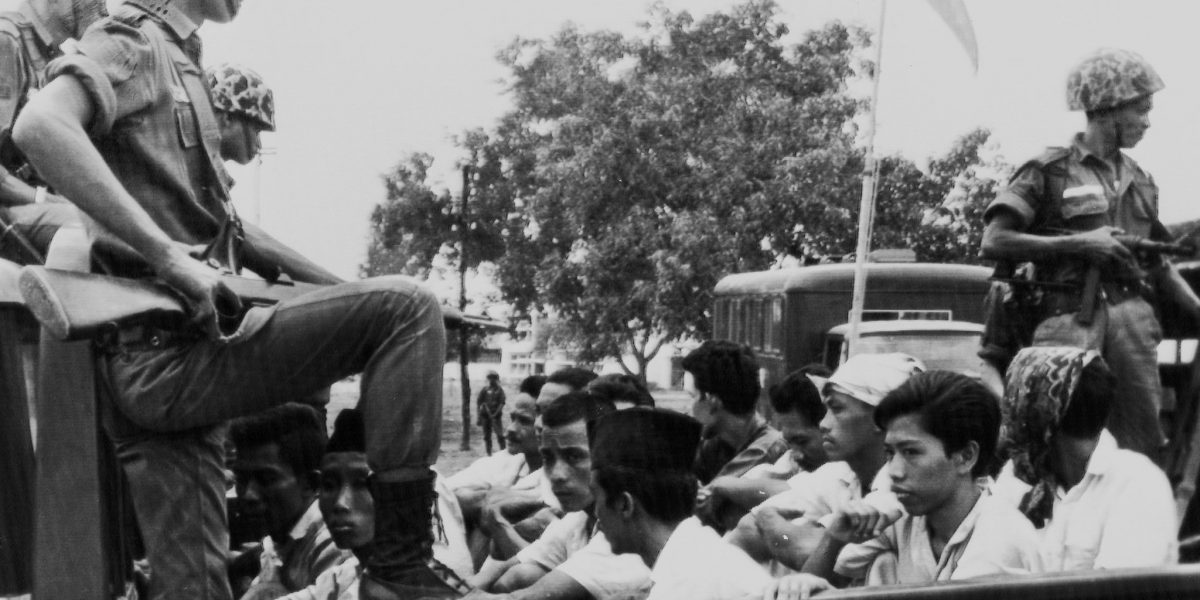 As debates rage about  the origins of the conflict in Ukraine, calls for no-fly zones and sending arms to fight back against the attacks from Russia, there is intense discussion about the role and nature of NATO and the level of US responsibility for the bloody events that have captivated and horrified people around the world. It feels like the politics of the Cold War loom large. Vincent Bevins’ book The Jakarta Method: Washington’s Anticommunist Crusade & the Mass Murder Program that Shaped our World helps inform our understanding of that period and is a valuable resource for those struggling with questions of international political economy today.

During the Cold War there was a movement of “Third World nations,” developing outside the direct influence of both the US and the USSR. But as these newly independent countries tried to forge their own political and economic path after throwing off the burden of colonial rule, the US’ Central Intelligence Agency intervened to disrupt them. Bevins puts into stark detail how the CIA dedicated itself to training and funding generals to overthrow, imprison, mutilate and murder anyone who advocated even the mildest of economic reforms in their own countries.

The rise of Global McCarthyism

After the end of World War II, the US emerged as the new dominant capitalist power and it quickly turned to consolidating and extending that power, trying to contain and counter the appeal of the USSR and Communism. For example, the US intervened in elections in France and Italy, funnelling money to parties it approved of and fuelling anti-left propaganda. As the divisions of the Iron Curtain around the USSR became more clear, the US turned its attention to influencing the future of the Third World. Stepping up to this challenge was the CIA, which became the name for the US’ dedicated spy service. Formed in 1946, the agency had the dual role of intelligence gathering and actively intervening around the world to shape it in the US’ interest.

In 1948, Indonesia emerged from a war for independence from Dutch colonialism, newly formed and independent. With Sukarno as its leader, the new country looked to be both anti-colonial and anti-communist. Sukarno came to symbolise the potential independent, neutrality of Third World Nations. The US was initially cautiously optimistic, adopting the “Jakarta Axiom,” meaning a tolerance for neutral Third World nations.

However, by 1953 the Jakarta Axiom came to an end. Neutral Third World nations attempted to control their own resources or pass modest laws on land reform. But CIA moved into action, pouring millions into orchestrating coups in Iran and Guatemala. The new consensus under President Dwight D. Eisenhower was that “neutral governments were potential enemies, and Washington could decide if and when an independent Third World nation was sufficiently anticommunist.”

The term “Third World” really came to prominence in 1955, when Sukarno and Ghanian president Kwame Nkrumah helped organize the Afro-Asian Conference in Bandung, West Java, Indonesia. The conference put forward a different kind of nationalism, based on anti-colonial struggle, attempting to organize Third World Nations to collectively work together for better terms within the global economic system to help foster their own development. More than 29 countries took part, organizations and communication networks sprang up with criticism of the global capitalist system. While these nations tried to forge a path outside of Washington or Moscow, and even tried to pay homage to the American Revolution in its speeches and communications, the entire conference was viewed as an offence to the US State Department and neutrality viewed as a crime against America. As Bevins explained, “Anyone who wasn’t actively against the Soviet Union must be against the United States, no matter how loudly he praised Paul Revere.”

The US saw Asia pivotal to countering the influence of the USSR and poured millions into the elections in Indonesia, but Sukarno’s Indonesian National Party and even the Communist Party (PKI) still did well. The well-organized PKI’s electoral success was frustrating to Washington, and Sukarno’s tolerance and good relationship with the PKI and other left wing parties increased Washington’s suspicion. The CIA dropped bombs, and helped fund and stoke rebellions against Sukarno in some of the outer islands. The plot failed, the military put down the rebellions, and the discovery of direct US involvement disillusioned Sukarno and pushed him further away from Washington.

The US perspective for shaping the Third World changed after this. The CIA began to focus on supporting the “military as a more effective, long-term anticommunist strategy.” Bevins documents the way in which this strategy was used to great effect in Brazil.

The military proved to be the most reliable anti-communist force and during the 1950s and 1960s. Brazil’s military deepened ties with Washington, training at Fort Leavenworth alongside soldiers from Indoneisa. Far-right groups were formed and received funding from the CIA, carried out bombings, shootings and other forms of intimidation against the presidency of the liberal reformer, João Goulart. Jango, as he was known, who had sided with the US during the Cuban Missile Crisis, was deemed a threat to world capitalism for proposing to extend voting rights to all Brazilians, rolling out a literacy program and a modest program of land reform. This independent course was punished by a US capital strike, economic sabotage, and the funding, training and secret support of a group within the military. This all eventually led to a coup on March 31, 1964 in which “the US State Department made tankers, ammunition and aircraft carriers available to the conspirators.”

The coup was successful and it represented a great achievement for the CIA’s new tactics:

“In Iran (1953) and Guatemala (1954), Indonesia (1958) and Cuba (1961), anyone who was paying attention knew that Washington had been behind the regime change operations. These very obvious signs of US intervention had not only tainted Washington’s image worldwide–they undermined the efficacy of the states they installed when they were victorious. Guatemala’s government fell apart quickly after the CIA-backed coup, as did the Shah’s government in Iran, eventually.” These new clandestine tactics were replicated to devastating effect in Indonesia.

In Indonesia, the US and British governments, not happy with President Sukarno’s national independence amidst escalation of the war in Vietnam, stepped up their secret activities in the country. The extent of these operations are still hidden, making it hard to know just what kind of black operations and secret warfare they were engaged in. What we do know is that a midlevel group of Army officers opposed to a military coup, calling themselves the September 30th Movement, launched an attempt to arrest a group of seven Army generals, ending in the deaths of these generals. It’s unclear whether this was a terribly bungled attempt by well-meaning officers loyal to Sukarno, the work of infiltration by anticommunist elements in the military, or a straight-up attempt to create an event that would allow for a seizure of power by the military. But after the deaths of those generals on October 1, 1965, “General Suharto seized control of the country, and told a set of deliberate, carefully prepared lies. These lies became official dogma in one of the world’s largest countries for decades.”

The military spread the story that the PKI was the mastermind of the “failed communist coup,” spreading lies that the generals were tortured in demonic rituals as women from the communist-aligned women’s movement danced naked around them before cutting off their genitals and murdering them. The US government quickly recognized Suharto as the leader and helped him spread the propaganda, while Western media outlets broadcast these lies back into the country. Communication from the US embassy in Indonesia to the US State Department on October 5 reveal that position of the US government: avoid overt involvement, indicate clearly to Suharto and the military that they want to provide assistance and support, increase contact with military, and spread the story of PKI’s guilt, treachery and brutality.

By October 7, military commanders were touring provinces, making it clear to civilians that they were expected to help violently repress communists or face arrest and death themselves. Party members, union members, and anyone even remotely related to left wing politics were arrested en masse, interrogated, tortured, raped, dissapeard. Religious youth organizations and other civilian organizations were recruited to do the killing in Central and East Java. Machetes (not native the region) began to appear in Bali in huge numbers at the exact same time as the military anti-communist campaigns.

By January of 1966, the outcome was clear. Excerpts from a US State Department memo paint a vivid picture:

“Prior to October 1, 1965, Indonesia was for all practical purposes an Asian communist state…events of the past several months have had three major effect on Indonesia’s power structures and policies: The PKI has ceased for the forseeable future to be an important power element. Effective action by the Army and its Muslim allies has totally disrupted the party’s organizational apparatus. Most Politburo and Central Committee members have been killed or arrested, and estimates of the number of party members killed range up to several hundred thousand…”

“When the conflict came, and when the opportunity arose, the US government helped spread the propaganda that made the killing possible, and engaged in constant conversations with the Army to make sure the military officers had everything they needed, from weapons to kill lists. The US embassy constantly prodded the military to adopt a stronger position and take over government, knowing full well that the method being employed to make this possible was to round up hundreds of thousands of people around the country, stab or strangle them, and throw their corpses into rivers. The Indonesian military officers understood very well that the more people they killed, the weaker the left would be, and the happier Washington would be.”

This process was repeated around the world, wherever the US deemed it strategic. The word Jakarta became a code-word for mass murder and the phrase “Jakarta is coming” spray-painted as a threat to left wing activists. From 1945 to 1990, a loose-network of US-backed anticommunist mass murder programs emerged around the world and carried out campaigns in at least 23 countries. As Bevins’ notes in his conclusion:

These programs interrupted and reversed any independent political projects, halted development, paved the way for capitalist globalization (or as Bevins’ refers to it: “Americanization”), dismantled the Third World movement, created crony capitalist countries across the globe, and helped to establish a virulent anticommunist narrative that is quite clearly alive and well today. As well, the lessons learned by much of the International Left was that peaceful politics were impossible, transforming the global political landscape even further.

The Jakarta Method is an essential resource for making sense of the violent and unequal global political landscape that we find ourselves in today. Understanding the role of US imperialism and the extents it will go to can help situate us politically and must inform our strategy and tactics. Bevin’s book is a stirring call for the left to honour the dead, draw lessons from their experience, and fight like hell for the living.