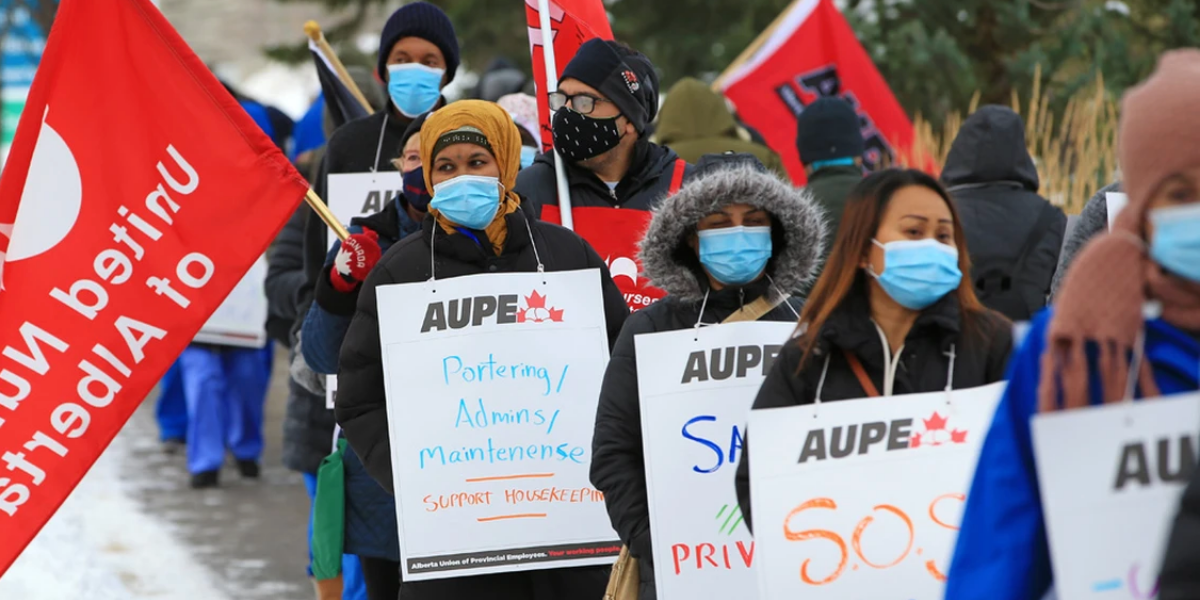 For socialists, the working class’ strategic location within capitalism makes it the social force capable of changing the world for the better. While the labour movement is more than just unionized workers, because of their networks, resources and social weight, trade unions are still a key weapon in the class struggle between exploiter and exploited.

Modern unions were formed in reaction to exploitation and abuse by employers, as workers joined together to use their collective strength to defend and improve their working conditions. The origins of many of the largest industrial unions came through militant strikes, occupations and battles with employers and the police.

In response to rising levels of struggle, labour relations were legalized and rules and regulations outlining accepted bargaining and strike practices were established. This legal framework functioned to channel shopfloor class struggle into a predictable routine of collective bargaining that has tended to dampen workplace militancy. Therein lies the contradiction at the heart of the relationship between socialists and the trade union movement.

The incorporation of trade union activity within a legal framework gave rise to the professionalization of labour relations. The trade union bureaucracy, the layer of full-time officials, serves the role of negotiating the terms of the compromises between labour and capital.

This bureaucracy occupies a unique social position, where their interests, perspectives and resources are different from the majority of members that they represent. These full-time trade union officials, often isolated from the shopfloor, tend to have a conservative view towards workers’ struggles. The rhythms of trade union work within the legal framework that is practiced and propagated by the trade union bureaucracy is also known as business unionism; the idea that workers and their bosses have a common interest and that compromise and conciliation will lead to long-term success for the union.

Holding back the struggles of workers, making sweetheart deals with employers, raiding other unions and generally being politically timid are all hallmarks of this kind of business unionism. The problems of the trade union bureaucracy are therefore problems for socialists and workplace militants looking to advance workers’ struggles. Looking at the history of the Canadian labour movement there is no shortage of examples of those in the trade union bureaucracy pumping the brakes on worker militancy in favour of conciliation and compromise.

For many the answer is to “call out” the trade union leaders for their lack of action. Frustrated by the direction of union leadership some on the left will turn to writing open letters, making speeches at conventions or delivering manifestos trying to shame union leaders into suddenly marshalling the forces of the working class to “bring down the government” or go on a general strike. These demands are abstract, made by individuals or groups with little social weight or influence, amounting to more often than not further political marginalization.

Socialists should have clarity about the role of the trade union bureaucracy, and should point out the backwards or wrong positions they take. But how and when this is done is conditioned by the terrain of the struggle. However, building the capacity and consciousness of the rank and file can only be done through action. Workers need to learn through struggle about the limitations of the trade union bureaucracy and how workers themselves can shift what is politically possible within their own unions. As Farrell Dobbs, a leader of the 1934 Minneapolis Teamster strike noted about how the rank and file members approached the union bureaucracy:

“The indicated tactic was to aim the workers’ fire straight at the employers and catch the union bureaucrats in the middle. If they didn’t react positively, they would stand discredited.”

The 1934 Teamster strike was exemplary in how to deal with the trade union leadership and how to mobilize unionized and non-unionized workers to win. Socialists at the heart of coal trucking workplaces built networks of rank and file workers, helped organize other workers and raised expectations about what was possible when they acted collectively. As a result, they won groundbreaking union recognition and transformed the trucking industry for workers in the Midwest.

Their campaign for better wages, expanded union recognition and better working conditions was fought without the support of the American Federation of Labour or International Brotherhood of Teamsters officialdom. Instead, the socialists in Minneapolis worked to raise the confidence and combativeness of their co-workers to the point where they could trust in the strength of the members rather than having to comply with the low horizons of the union officials. To achieve this, they needed mass, democratic participation, real rank and file activity in support of a shared set of demands, in which workers felt a sense of ownership and responsibility to take action to defend.

Criticism of the trade union bureaucracy and union leadership can’t ignore that there are real differences between progressive or left-wing union leaders and right-wing union leaders. There is a big difference between Ron Carey, the now deceased former head of the Teamsters, whose leadership victory buoyed the left inside and outside the union while leading the successful 1997 UPS strike and James Hoffa Jr. the current head of the Teamsters, who used bureaucratic methods to push through a UPS contract despite the majority of members voting against it. Socialists can not be neutral to these differing political outlooks of leadership and the very real material impact they have on union members.

The problem is that some see getting “good, progressive” leaders elected who can then press a general strike button and call union members into action as the answer to building militancy in the labour movement. Having left-wing activists in executive and full-time union positions can play an important role in helping to build the strength of the union by amplifying workers’ struggles, supporting political campaigns and making it easier for activists to operate. However, this is not a substitute for rank-and-file organization and activity.

In 1915 the Clyde Workers Committee of striking Glasgow factory workers, who were striking without the support of their local and national union, succinctly outlined how rank and file activists should approach the question of the trade union bureaucracy:

“Our purpose must not be misconstrued, we are out for unity and closer organisation of all trades in the industry, one Union being the ultimate aim. We will support the officials just so long as they rightly represent the workers, but we will act independently immediately they misrepresent them.”

The Clyde Workers Committee perspective on building the self-activity of the working class by winning rank and file members into action, rather than focusing on the positions of union officials at the top is a formula that socialists have repeatedly used to build working class militancy.

The labour leadership strategy uses top-down methods such as closed meetings, strongly worded letters, and astroturf campaigns to advance their politics. In short, they focus on pushing paper rather than moving people. The weakness of this approach is that it puts an emphasis on the union bureaucracy rather than recognizing that it is a strong and confident rank and file that can organize independently of the leadership and force the leadership to act against the conservative forces that hold them back.

The appeal of capturing union leadership positions or calling on union leaders to bring their members out on strike are symptoms of socialist frustrations with the trade union bureaucracy and an impatience with the relatively low levels of working class struggle. It is an attempt to find organizational solutions to political problems.

When socialists mirror the methods of the labour bureaucracy — by offering up a strategy of strongly worded letters or passing paper motions — they eschew the hard work of actually building the political alternatives to the union bureaucracy. A strike, an occupation or even a political campaign is only as strong as the rank and file make it. This doesn’t mean leadership isn’t important, rather it is an engaged and militant rank and file that are ultimately the determining conditions in shaping the politics and direction of the union. Formal leadership matters, but the informal leadership of the active elements of the rank and file is where the rubber truly meets the road.

For years, the Fight for $15 and Fairness faced hostility or dismissal from the official labour movement. Instead of focusing on denouncing their positions, the campaign organized workers inside and outside of unions to fight on the campaign’s class demands; focusing on the fight against the bosses and making demands on the government.

The goal was not to just win formal support of union leadership for the campaign, but to build as wide a network of activists as possible inside the trade unions who were actively trying to link the campaign demands with issues inside their workplace. When union leaders formally supported the campaign this was not seen as ‘mission accomplished’, rather it was seen as a welcome opening to further advance organizing efforts amongst the membership. The goal for socialists is to build roots within the organized section of the class along a basis of struggle.

Where union leaders were resistant to support the campaign, consistent organizing and mobilizing rank-and-file union members had the effect of hemming in the union leadership to the point where they had to offer support to the campaign or be exposed in the eyes of their membership. The terrain of struggle was altered through action, not idle proclamation. Workers, inside and outside of unions, were given a first-hand political experience about strategies and tactics of navigating the trade union bureaucracy. This is a political education in strategy and tactics that no sideline denouncement could ever match.

Absent this mobilized base of workers, you risk lobbying the union leadership to move without the conditions to actually win. Orders from union bureaucrats are nothing without workers prepared to fight to win them. A strategy that assumes the only thing holding back the masses is their faulty leaders reveals a serious ignorance about the struggles facing the modern working class movement.