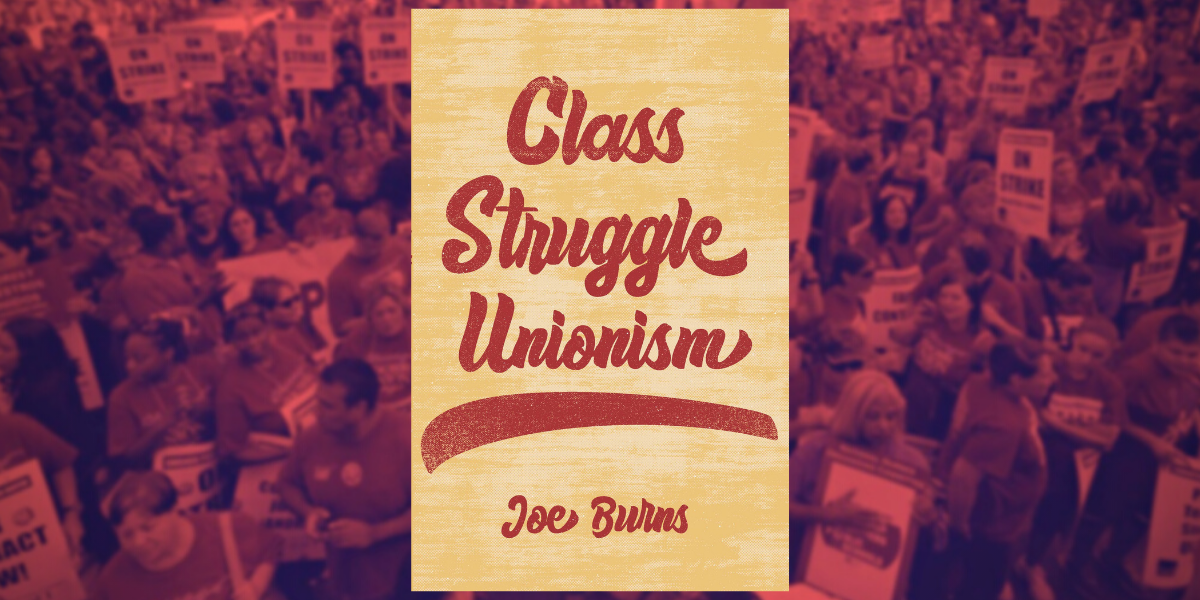 Mainstream news sources are calling this the “summer of the strike,” discussing working conditions and income inequality, and questioning the motivation for what seems like a new wave of labour unrest. High profile unionization drives at Starbucks and Amazon warehouses—alongside the increased attention that gig workers, delivery workers, truckers, nurses, teachers, and other essential workers received during the pandemic—have combined to spotlight inequality and bring issues of decent work to the front page.

For workers and socialists who have been thinking about and organizing on these issues for a long time, this attention is a welcome change. However, the discussion of next steps can leave a lot to be desired. For these reasons and more, Joe Burns’ new book Class Struggle Unionism is a timely and needed intervention for those grappling with questions of labour strategy and tactics.

Joe Burns is a veteran union negotiator and the director of collective bargaining for the Association of Flight Attendants. This book is clearly written as a way to intervene in this uptick of interest in labour issues and socialism more broadly. The book is short, plainly written, free of jargon, and clearly meant to be shared between people working in the labour movement. He takes great care to gently critique the path that the US labour movement has been on for the past several decades, while promoting discussion about the way forward. The way forward he sees is simple: class struggle unionism. He spends the 140-odd pages sketching out what that is, what it isn’t, and pointing to some possible ways for workers and the labour movement to reclaim this lost tradition.

The books begins with a simple and useful breakdown of some key socialist concepts. Trying to speak the language of our time, Burns quickly explains how profit is made by paying workers less than the value they create and paints a picture of the level of inequality between the workers who work and the billionaires who profit. The quick breakdown of these Marxist ideas, conveyed as simply as possible, is a great review for seasoned socialists as well as young activists just getting acquainted with these ideas.

The limits of business unionism and labour liberalism

In trying to explain what class struggle unionism is, Burns first explains what it is not. The examples he identifies as most common in the labour movement are business unionism and labour liberalism. Business unionism, according to Burns, seeks labour peace and collaboration with the boss. Business unionists tend to see problems as between individual workers and bad bosses, and accept the framework of labour relations as it exists. Classic examples of business unionism can often be seen in some of the building trades. Unions like the Labours International Union of North America (LIUNA) that endorsed Doug Ford in the last Ontario election, according to Burns’ framework: “see workers’ interests as aligned with those of employers…this forces us to negotiate from a position of weakness against an employing class that is constantly amassing greater power…they seek a softening of struggle, they seek accommodation with owners.” Traditionally, this type of unionism has led to racist, exclusionary practices and has often supported nationalist policies and wars abroad.

Labour liberalism, on the other hand, has been the dominant trend in the US labour movement for the last couple decades. Labour liberalism arose in response to bureaucratic and ineffective methods of the AFL-CIO (American Federation of Labour – Congress of Industrial Organizations), acting as “a form of unionism that straddles the fence between business unionism and class struggle unionism. Labor liberals adopt the progressive political views of the middle-class social movements but reject the traditional workplace organization and concerns of both traditional unionism and class struggle unionism…they [favor ] moving away from the bitter, open-ended strikes of the 1980s toward utilizing corporate campaigns, one-day strikes, and other staff-controlled methods of the class struggle.”

Labour liberalism, most exemplified to Burns in the SEIU and the methods advocated by Jane McAlevy, may seem like an improvement because it speaks the language of social justice. But it tends to rely on the work of those in union staff positions, non-profit organizations and Democratic Party politicians rather than rank-and-file workers. The methods employed are often centered on the actions of staff organizers, resulting in less union democracy than even the business unionism model. Labour liberalism may use confrontational tactics such as one-day strikes or highly visible pickets, but these tactics are used to eventually reach a deal with employers that does not involve the input or self-activity of workers.

The path forward: class struggle unionism, and the role of the militant minority

Burns recognizes that these forms of unionism are better than no unionism at all, but he points to past models of class struggle unionism as much better options. This includes the Industrial Workers of the World (IWW) in the early 1900s, the role the Communist Party and Trotskyist groups played in the sit-down strikes and wave of unionization that created the CIO in the 1930s, as well as the labour militancy of the late 60s and early 70s in the US. Based on his study of history and evaluation of labour strategy and tactics in his own time, Burns has come up with a few key guiding principles for effective class struggle unionism: 1) understand that powerful financial interests are lined up against our unions, 2) understand that agreements with employers are temporary truces rather than alignment of interests, 3) understand that workers and bosses have opposing interests on every issue, 4) see ours as a struggle between classes.

These simple principles form the basis of a class struggle union approach and lead to an emphasis on three practical strategies for those wanting to engage in class struggle unionism: build rank and file movements, strengthen shop floor struggle and fight for union democracy. Along with prioritizing a united working class fight against racism, sexism, and nationalism these principles essentially summarize the approach to unionism that Burns believes can renew and revitalize the labour movement.

There are many useful points in this short book, but perhaps the greatest strength of this book is the care which Burns takes to address young workers, union staffers, workers centres, and socialist activists to include them in the path forward. For instance, Burn notes that worker centers, which vary in how they operate, should be viewed through a prism of class struggle unionism and understood as part of the project of building working class power. Key to implementing the class struggle approach to unionism wherever they are located is the role of the “militant minority” and helping foster its growth.

The militant minority is a layer of workers who have a class struggle outlook, want to build worker confidence and combativity and can play (and have historically played) a leading role in winning and consolidating gains for the labour movement. A generation of this brand of activist was systematically purged from the US labour movement during the Cold War and their absence has had disastrous effects on the movement’s strength.

It remains a missing ingredient, and reviving the militant minority on a large scale is necessary for putting the labour movement on a class struggle footing. As Burns notes, “the concept of the militant minority is pretty simple. Organizers and activists know that normally there is a core people who most want change in a workplace and a community. A good organizer pulls these folks together and engages the enemy, whether it be the boss or slumlord, and in doing so systematically pulls more and more people into the struggle.” A recent example of this approach was the very successful role of the Caucus Of Rank-and-File Educators in the Chicago Teachers Union. Replicating this success elsewhere is a top priority for implementing a class struggle approach.

Class Struggle Unionism is a vital book that lays out a very clear and specific criteria for those of us interested in strengthening the ability of the labour movement to fight and win. It should be read, shared and discussed amongst co-workers and activists, promoting discussion and planning amongst those who could be that militant minority that helps grow a new generation of class struggle unionism.