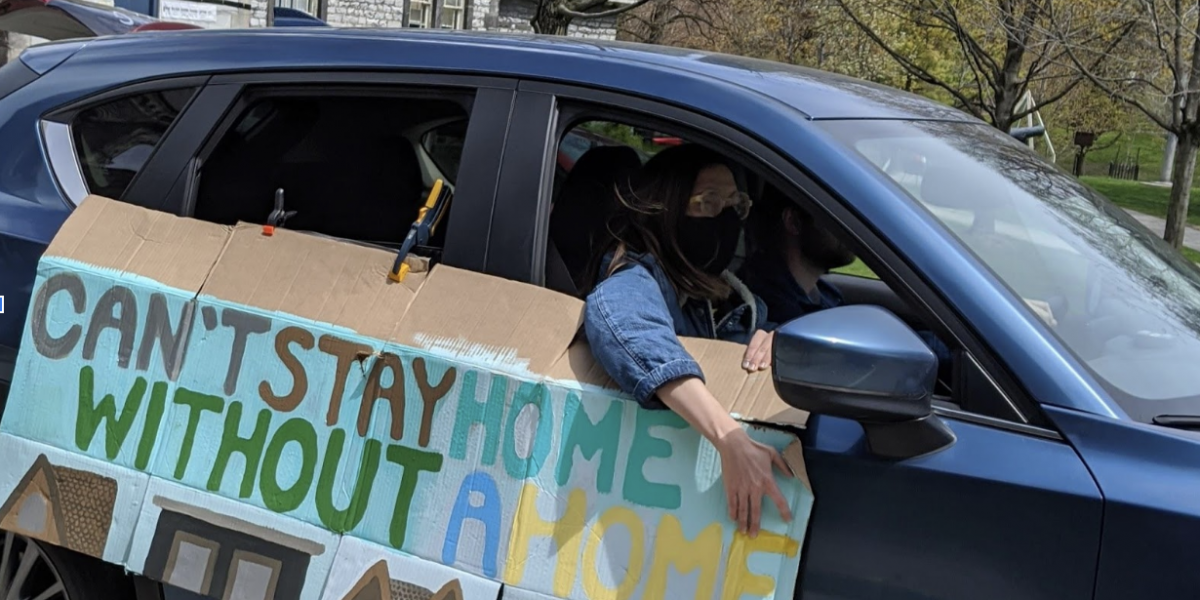 On May 6 over 50 honking cars circled Queen’s Park and Toronto City Hall in a car caravan demanding that the city and province immediately house all people experiencing homelessness in order to prevent COVID-19 deaths. Protesters drew attention to the hypocrisy of governments asking people to “stay home” and practice physical distancing while abandoning thousands of homeless people in congregate living arrangements in shelters and respites.

Outbreaks are confirmed in at least 9 shelters, respites or drop-ins, with over 200 homeless people testing positive, even though testing has not been widely performed in the shelter system.

Demands of the protest include:

While the city announced 1200 hotel rooms a month ago, and has acquired some temporary housing units this week,- many homeless people unable to get into shelters are forced to camp in tents. The City has now stated it plans to clear tent encampments.

“Torontonians know everyone deserves a home to be able to stay safe and healthy. Lack of housing has been an emergency in this city for far too long.  It is critical that housing needs are addressed and maintained after the pandemic too,” states Simone Schmidt, a musician and action organizer. “As of late April, it is difficult if not impossible for people from the streets to find a safe bed indoors. Shelters remain overcrowded,” they stated.

“Clearing encampments while there is literally nowhere else to go and nowhere to be safe, is beyond cruel,” states Jessica Lyons, nurse and event organizer.

Organizers of the action emphasized the safe nature of the protest. “During the action, individuals did not come into contact with each other, and rode in vehicles only with people who live in the same household,” says Ginger Dean, event organizer. “The power and necessity of collective action and protest does not go away in a pandemic. So we need to find new and creative ways to come together and hold governments accountable without endangering each other.”

“The city and province must act with the urgency and speed that this crisis warrants and that those experiencing homelessness deserve. No one should be left behind,” states Caitlin Hewitt-White, a caravan protest organizer.

A group of organizations including the Black Legal Action Centre, the CCLA , Aboriginal Legal Services among other groups are taking legal action to mount pressure on the city to speed up their response in an increasingly dangerous situation in shelters.

The community action was organized to amplify the demands of these Housing, Shelter Safety and Harm Reduction organizations, please check them out to learn more and support their work: