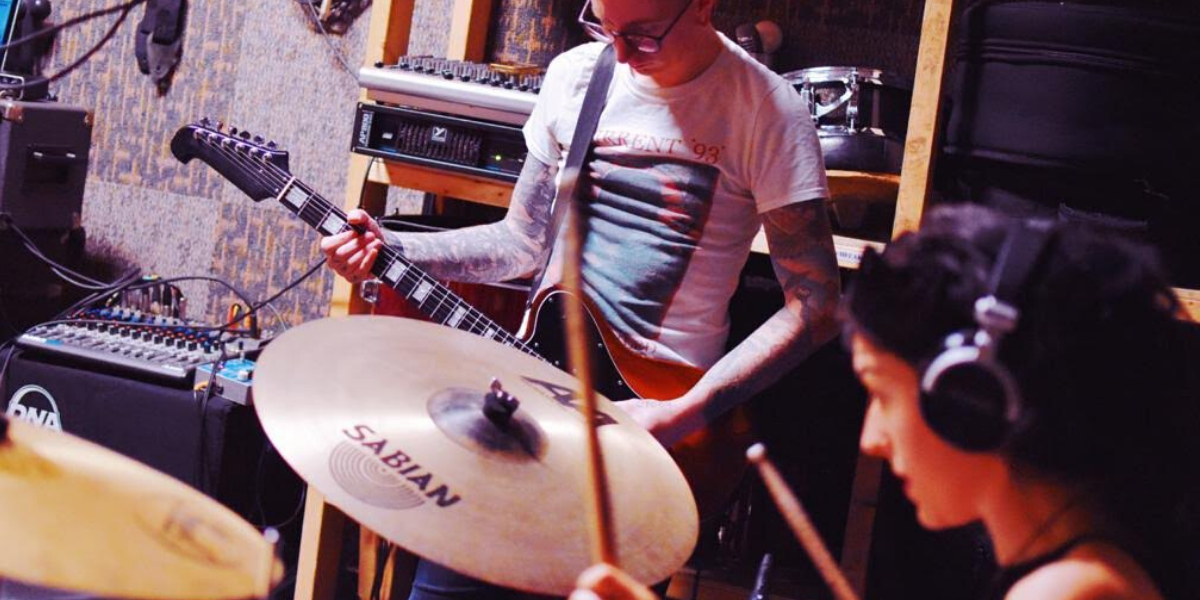 If there is a suitable soundtrack to a police precinct burning down, Holy Spirit is it. The Toronto-based band has just released their 2020 demo on bandcamp and it is 9 songs and about 10 minutes of politically-charged hardcore. In other words: perfect.

Holy Spirit is Autumn Easterbrook on vocals, Peter Mahoney on guitar, Alison Lang on bass, and Alexis Fawn on drums. Their music brings to mind some of my favourite moments of bands from the powerviolence sub-genre: the speed of Hellnation, the harsh vocals of Capitalist Casualties, the passion of Dropdead, and the exciting tempo changes of Crossed Out. Now, it might not be obvious to everyone reading this review, but these are kind of legendary bands and hefty comparisons. But listening to Holy Spirit, it feels like they wear their influences quite proudly, and they’ve done something I truly value them for. They have taken some of the best, most aggressive music and put it in a nice communist package.

Race to the Bottom

Talking to Autumn about the lyrics, it was interesting to get a deeper dive into some of the themes. The songs Holy Spirit, Race to the Bottom and Thin Ice all deal with similar themes of identity, transcendence of identity, individualism, and a critique of liberal feminism. The big lyric from the song Holy Spirit is “I amount to more than the opposite of what I am not.” According to Autumn, the idea of the song is that the holy spirit is Hegel’s Holy Spirit, in that it is representative of transcendence, or the synthesis in a dialectical movement. “I feel like I often find myself engaging with someone in a way that makes me feel like my identity as a trans person is the core part of my engagement with that person, like they are extremely cautious, trying not to say the wrong thing, and it’s this kind of acceptance, but from a distance. It’s like ‘I accept you, but you are still the other, and how I engage with you is that you occupy the space of transness.’ Whereas the relationships that I have with people that I really enjoy are the ones where this aspect of myself just doesn’t come up, or it’s incidental to our relationship. I’m not cis-gender, but I do want to transcend my transness and just be incorporated into a fully-human being. Maybe the risk of being hurt in a relationship where I feel fully human outweighs a relationship where I am never hurt, but never feel fully realized.”

The song Race to the Bottom contains the lyrics “when your primary means of identifying yourself is your oppression, you become divested from ending that form of oppression.” For Autumn, this means “that if you have invested highly in your identity as a queer person or a trans person, you are going to be divested from wanting to see that identity abolished or become inconsequential. So we live in this highly developed capitalist society, where, like all societies utilizing private property, it relies on the sanctity or the primacy of the individual to function.”

What you’ll hear from Holy Spirit is that lyrics dealing with identity and personal struggle remain grounded in the material basis from which these struggles arise, the capitalist mode of production. As Autumn notes, ”we live in an era of late capitalism wherein we are not just pressured, but absolutely compelled to assert ourselves as individuals at every juncture, individualism having paramount importance in capitalist society; the same individualism which allows a handful of individuals to hoard wealth while poverty and climate change prevail. An individualism which justifies the unjustifiable.”

The songs Our Chains, 55 Fires, and The First Step also deal with themes of transcendence, but in a more material sense.

Our Chains looks at the violence of the oppressor versus the violence of the oppressed. It tries, as Autumn puts it, “(as briefly as I can in a 30 second song) emphasize that we are enduring a seemingly never ending cycle of economic crisis, where the wealthiest in our societies accrue ever expanding empires, while we are actively manipulated into fighting each other for the crumbs they throw at us.”

55 Fires exposes the capitalist priorities when confronted with problems of its own making. Originally written about climate change, the politics it addresses apply to COVID-19 as well. As Autumn explains, “55 Fires was written the other summer when Northern Ontario had a series of wildfires. At the time, I saw a lot of people online blaming other countries for contributing the most carbon emissions, which was supported by mainstream media. I found this to be interesting, seeing as it seems to make more sense to go after individual companies, rather than blame or absolve whole nations, especially given the statistic regarding 100 companies producing 70% of carbon emissions.

There is a parallel between rhetoric concerning Covid and the climate crisis. We are told that the solution can’t be worse than the problem. In the case of Covid we are told that damaging our economy is a solution worse than the problem of saving countless people from death. We are told the same thing about the problem of saving our planet, when its solution entails the dissolution of some of our economy’s big players. So in the song I say ‘Between the earth and the economy, it’s 55 fires and I feel the heat,” which is to say that we have chosen to let the world burn. Or at least, in this case, northern Ontario.”

Cutting against the alienated individualism of the capitalist self-help and spiritual solutions, The First Step includes the lyrics: “The first step to a higher development of the spirit is seizing control over our material conditions.”

As Autumn puts it, “The first step is uniting as a class and asserting our need to have universal access to the basic material necessities of life. And from there, who knows what humanity will have the capacity to develop. The point here is that ‘expanded consciousness’ of sorts may be possible, but it isn’t fair to ask others to attain spiritual enlightenment or self actualization when they aren’t able to feed themselves and their families”.

Listen to Holy Spirit on bandcamp