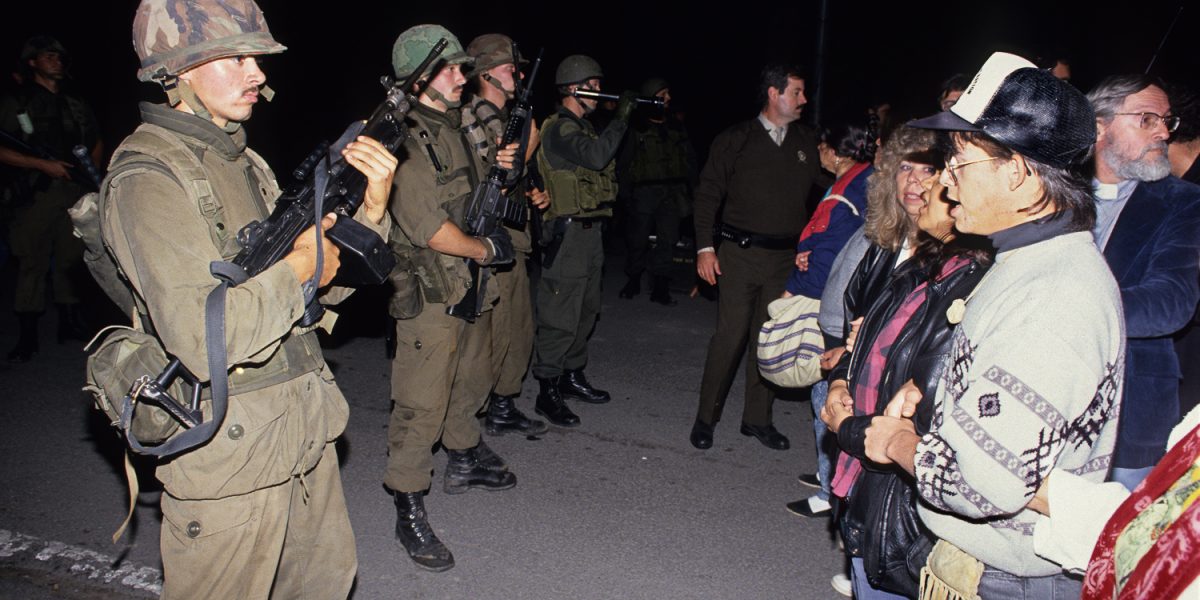 Leftists should categorically reject the idea of deploying the military to disperse right-wing anti-vaccine protesters. Talk of using the Canadian Forces (CF) to dislodge the truck convoy in Ottawa is dangerous and will inevitably come back to harm unions, First Nations and social movements.

In a recent Globe and Mail column headlined “How Canadian law allows for military assistance in ending the Ottawa occupation”, former defence minister David Pratt whitewashes the history of domestic deployments. They have rarely been used to help ordinary people.

The Canadian Forces: a colonial occupation

Rooted in a British force that conquered today’s Nova Scotia by putting the heads of Mi’kmaq soldiers on spikes and suppressing First Nations in British Columbia through ‘gunboat diplomacy’, thousands of Canadian troops were deployed during the 1990 Oka Crisis.The 78-day standoff was spurred by Mohawk opposition to the expansion of a golf course and housing on land that included an Indigenous burial ground. About 2,500 regular and reserve troops were put on standby while 800 members of the Royal 22e Regiment relieved Sûreté du Québec police at the Kahnawake and Kanesatake barricades. Two fighter planes, three high-tech Leopard tanks, numerous artillery elements and 20 helicopters were also engaged.

The Canadian Forces (CF) have played a smaller role in recent conflicts with Indigenous communities at Gustafsen Lake, Ipperwash and Elsipogtog as well as in monitoring Indigenous groups. Canadian military intelligence spied on Idle No More and a draft version of the military’s 2007 counter-insurgency manual highlighted “radical Native American Organizations, such as the Mohawk Warrior Society” as potential military targets. (In recent years military intelligence has also spied on Black Lives Matter, Occupy and peace activists, though in a possible sign of where their sympathies lie CF Intelligence told APTN “they are not monitoring the ongoing trucker convoy protest in Ottawa, nor are they conducting any related investigation as there is no security threat to DND/CAF involved.”)

The CF has sought to clamp down on Québecois nationalism. In late March 1918 anti-conscription protests erupted in Québec City after some French speakers were arrested for not carrying their conscription exemption cards. Martial law was proclaimed and over a thousand English-speaking soldiers were deployed to maintain order and enforce conscription. At least four were killed and dozens injured when soldiers opened fire on protesters.

In 1970 Trudeau senior used the War Measures Act against Quebec, declaring, “there’s a lot of bleeing hearts around who just don’t like to see people with helmets and guns. All I can say is, go on and bleed, but it’s more important to keep law and order in this society than to be worried about weak-kneed people who don’t like the look of a soldier’s helmet.” He deployed 6,000 troops after the Front de Libération du Québec (FLQ) kidnapped Britain’s trade commissioner in Montréal, James Cross, and provincial labour minister Pierre Laporte. During the 1970 “October Crisis” tanks rolled down Saint Catherine Street and troops patrolled residential neighbourhoods. The CF monitored demonstrations in Montréal, and hundreds were arrested.

Initially a central function of the Canadian militia was to quell labour unrest. Between 1867 and 1933 the military aided the civil power at least 133 times and strikes represented half of all deployments. While technically designed to maintain ‘law and order’, writes Mike O’Brien, militia “intervention in industrial disputes … [were] in virtually all cases to the advantage of employers.”

In maybe the most remarkable deployment against those seeking to improve their work conditions, between 1922 and 1925 a total of 5,000 militiamen were dispatched to quell three miners’ strikes in Cape Breton. Upper Canada College alumni Major-General Herbert C Thacker aggressively defended the interests of the British Empire Steel Corporation (Besco), the largest industrial consortium in the country. As part of the deployment against the 1922 coal miners’ strike near Glace Bay, Thacker requested Halifax-based destroyers the Patriot and Patrician. His request was endorsed by the Senior Naval Officer in Halifax but blocked by military headquarters in Ottawa. Thacker also sought air support, even though neither the air or naval force were included under the terms of the Militia Act. After the strike concluded the president of the union commented: “The wage schedule was accepted by miners under the muzzle of rifles, machine guns and gleaming bayonets with further threatened invasions of troops and marines, with warships standing to.”

We shouldn’t ignore the troubling history of the military being used to clamp down on social movements. Nor should we equate deployments during a natural disaster — as Pratt does — with dislodging political protesters. Irrespective of whether it’s legal to send the military on to the streets of Ottawa, progressives need to forcefully reject the idea. It’s dangerous to normalize the use of the military against protests, whatever we may think of their politics.