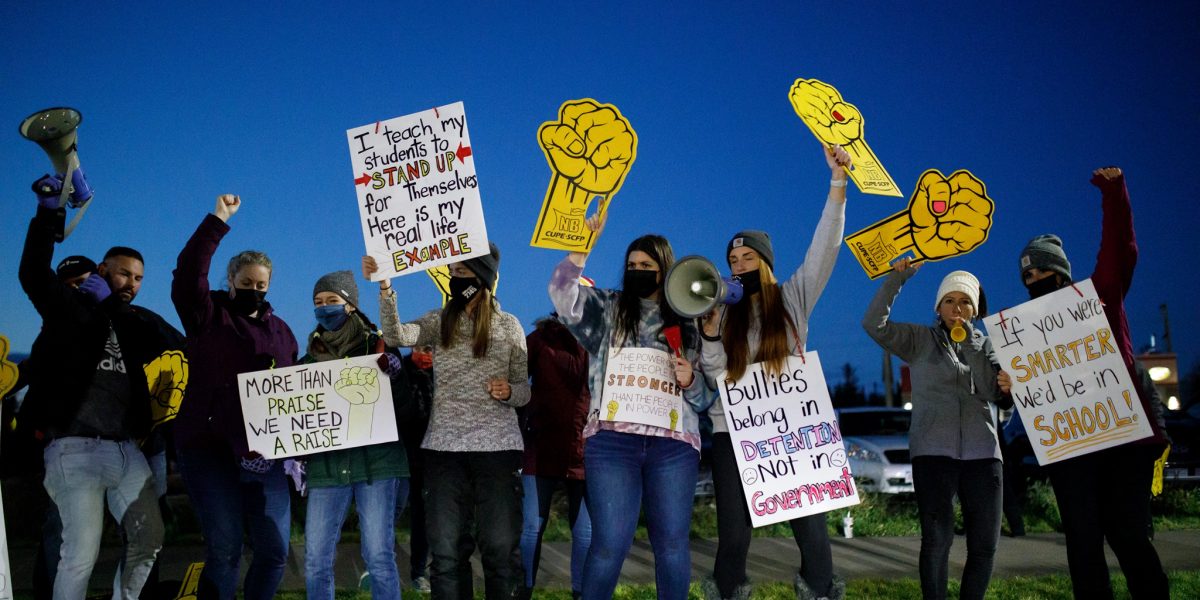 Since the start of the strike by 22,000 public sector workers in New Brunswick, on October 29, there have been picket lines in almost every central location you can find within the province. From Fredericton to Moncton to Miramichi, the energy that the hundreds of thousands of CUPE workers are bringing to their fight for fair wages and just treatment is inspiring and powerful. It is evident from this intense energy that workers are in this fight for the long run, and wholeheartedly so.

As part of the strike agreement, a decision was made to have designated workers continue to work, like those in Educational Assistant positions in schools. The government decided to lockout these workers, deemed essential, and stopped paying them. On October 30, CUPE filed a complaint with the New Brunswick Labour and Employment Board about the government’s decision to place these designated strike workers on “leaves without pay” while they worked, using the excuse of online learning to justify the failure to compensate. The audacity from the Higgs government to try and undercut workers for being designated to work mostly online, demonstrates how this Conservative government undervalues certain forms of labour.

On November 2, in a blow to the government, the labour board ruled that designated workers should be paid for their online work and not be placed on leaves without pay.

Despite the Flemming saying, “This has nothing to do with labour relations”, this move by the Conservative government is nothing but a blatant attempt to break the strike. Many healthcare workers who reported to work today, were sent home by their employer and told they were not needed at work. Higgs’ justification for this emergency order has quickly crumbled.

There is little chance this order would stand up in court, especially in the wake of the 2015 Supreme Court ruling that upheld healthcare workers’ right to strike. But the government doesn’t care about being on the right side of the law.

Over the last week a lot of the blame for the delays and cancellations in the healthcare system has been heaped onto the striking workers. This is a concerted effort by the government and the rightwing to turn people aginst the strike and lay the ground work for this back to work order.

While it is true that our healthcare workers that hold up our health systems were out striking, it is important to note that the healthcare system prior to the strike has been failing miserably due to underfunding and conservative budget cuts.

Workers have not been valued for their extra labour and are demanding to be compensated fairly. While overworked and undervalued during the pandemic, workers have been pushing within the “proper” channels, as some would call them, to call for policy and wage increases. The government has refused to act. A strike was the next necessary step.

Higgs not workers are threat to public service

Higgs and the Conservatives could easily have avoided any strike disruption if it actually addressed the underlying causes of the strike.

This strike is not causing the healthcare system to crumble, the strike is simply forcing Higgs into a corner to make a decision about whether he believes our essential workers and working class peoples are deserving of fair treatment.

It is the strikers, not Higgs, who care about and are willing to fight for public services in this province. Higgs is using the cover of the pandemic to attack workers’ right to strike in order to force them to accept a deal that keeps workers earning low-wages and undermines their pensions.