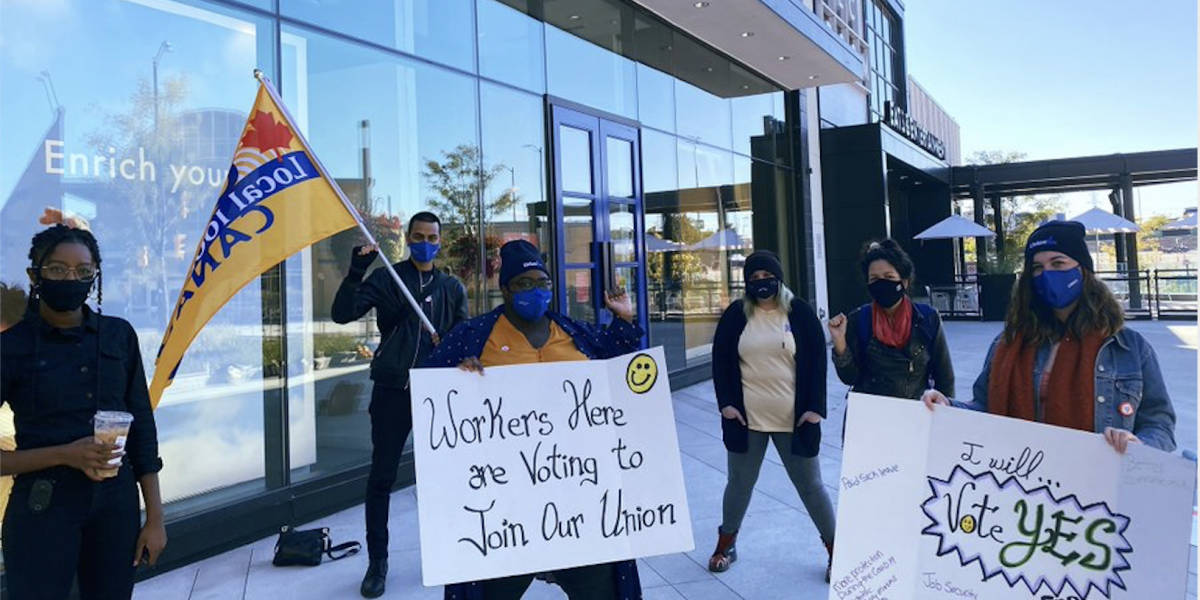 Indigo Books and Music, the largest book retailer in Canada, wears its progressive image proudly on its sleeves. Back in 2001, Heather Reisman, the organization’s founder, made the news for deciding not to carry Hitler’s Mein Kempf in Indigo stores. Reisman regularly endorses books, popularly known as “Heather’s Pick,” that critically engage with race, class, gender, and society  all the while, actively supporting the Israeli Defence Forces (IDF) in establishing apartheid on occupied Palestinian land. Behind this sheen of progressive values lies a history of repressive actions, many of which resurfaced recently when workers fought against Indigo’s unfair treatment of its employees.

Retail workers at Indigo have recently reported that the organization regularly mistreats their workers, and has failed to take proper safety measures both during the Covid-19 pandemic, and long before. Frustrated with the company’s continued negligence of workers’ safety and refusal to provide decent work, workers at Indigo’s Square One Mall location — its second busiest store in Canada — took action to unionize.

“It’s not that these issues are new,” said Paula*, a worker involved in the effort. “The pandemic was a breaking point.”

“We are absolutely ecstatic about our win,” says Gale*, an organizer. “We’re so excited to have the ability to bargain for better conditions for all our employees. In the end this couldn’t have happened without a strong and united team that truly cared for each other.”

Back in 2018, the company had shifted to providing 10 unpaid job-secure emergency leave days, as opposed to two paid personal days, in accordance with the Ontario government’s repeal of the Fair Workplaces, Better Jobs Act (Bill 148). This means that staff who needed to take time off for COVID-19 testing, or cautionary self-isolation as a result of showing up to work, would be losing shifts and wages. Although Indigo had offered to pay workers in continuity should they contract the virus and need to stay home, workers claim that management failed to notify them when Square One patrons or employees tested positive for COVID-19, nor did they set up a framework for dealing with potential exposures.

At the beginning of the pandemic, Indigo temporarily laid off 5,200 employees. The company allegedly mishandled several documentations during temporary layoffs which led to some employees at the Square One store not being able to receive the Canadian Emergency Response Benefit (CERB). At the height of the pandemic, employees explained that they felt disposable and replaceable.

With the different phases of reopening, some staff were asked to return to work. And although the employer announced the call-back roster is performance-based, the general feeling amongst employees is that “people who are more compliant with Indigo’s mistreatment of staff were given preference.”

As well, some employees mentioned that Indigo has been actively trying to silence conversations around work conditions — namely wages, safety, and benefits — by removing the option to post anonymously on their internal job board. Dissent had been quietly growing on the board, Susanna* says, and the de-anonymization “kicked off a massive, massive discussion that has been brewing clearly for four years in this company regarding the treatment of its employees. And following all of that, they decided instead of addressing those concerns, they were just going to turn off anonymous commenting, so that people no longer felt safe even saying those things. It was a way to quell what they felt was going to be an impending rebellion.”

“Indigo continues to position itself as this progressive and super amazing company,” she continues, “that loves its employees, that cares about social causes, that is so Canadian in that way and so different from regular corporations because they care. And they have gone to show time and time again that they don’t, that at the end of the day, all that matters to them is their bottom line.”

In light of these accounts, Indigo workers at Square One felt that unionizing was the best way to fight back. Unionization efforts would mean building power among workers. The strengthened negotiation and bargaining opportunity would then ensure a safer work environment, humane sick day policies, and a fair wage scale. But how did the idea come to be?

While many issues had arisen during the pandemic, a key struggle involved the store’s public bathroom. The Square One location had employed a cleaner in the past but when the company failed to meet its quarterly profit goal, it let them go and told employees they would be cleaning the bathroom instead. With the spread of COVID-19, this quickly became an unignorable issue, and workers refused to clean the bathrooms.

The staff at Square One location worked collectively to sign a petition against having to clean the bathrooms. Management later intervened, hiring a doctor to tell workers it was safe to do so, then telling workers that they could either clean the bathrooms or resign. This incident and Indigo’s handling of it was a significant turning point that provoked workers into thinking and acting collectively.

Out of this, and the host of issues that the pandemic had exposed, the union drive emerged. Organizing retail work is admittedly difficult; part-time hours often keep workers divided from each other which stifles the opportunity to think collectively. But the leadership committee, Gale says, “made endless phone calls [and conversations] with as many employees as possible” to explain how a collective response could help them.

Paula says that after the union drive began, management suddenly became attentive to workers’ needs — but with less-than-noble intentions. “The gaslighting  was exhausting,” she says. “We had to make sure our colleagues understood that the only reason why they were suddenly making these overtures was for the purpose of suppressing our union efforts and that of our sister stores.”

“Sometimes we worried that people would believe these last minute promises management made,” she continues, “However, my colleagues knew better. They were ready to make meaningful change and we knew we could only do this as a union. If I could recommend a tip, I would say that you should be prepared to quickly combat anti-union messages that management will send out with your own statements [and] think critically about why your company can suddenly make so many changes to accommodate your needs after they hear that you have submitted an application.”

After securing union representation with United Food and Commercial Workers (UFCW), it wasn’t long before they won their first workplace battle: Customer Service Reps officially no longer have to clean the public bathrooms. Indigo also connected its Square One employees with an app that posts latest COVID-19 alerts within Square One mall, enabling workers to be more aware of their safety and environment and have transparency regarding potential exposures – something Indigo had failed to provide pre-unionization.

The retail giant has also recently announced that part-time hourly, seasonal, and flex employees will receive 10 hours of paid leave and shift pay coverage if workers need to be tested for COVID-19. These changes come at the wake of growing calls for unionization across Indigo stores in the country and following effective negotiation efforts by the unionized locations.

“We realized that this was a movement much bigger than us,” Gale says. “That other stores were riding on our success. Indigo 771 in BC has launched their own campaign following in our footsteps. It’s been incredible to see how this has impacted the world beyond our own store.”

Riding on the victory of Indigo Square One retail employees, workers at Indigo’s flagship Montreal store at Place Montreal and Indigo’s Chapters Pinetree location in BC have also successfully voted to unionize. This is a monumental achievement for all retail workers who are taking back agency and reminding corporate business owners like Heather Reisman that there would be no wealth without labour.

*Names have been changed to protect the anonymity of workers.

With contribution from Dan Darrah.