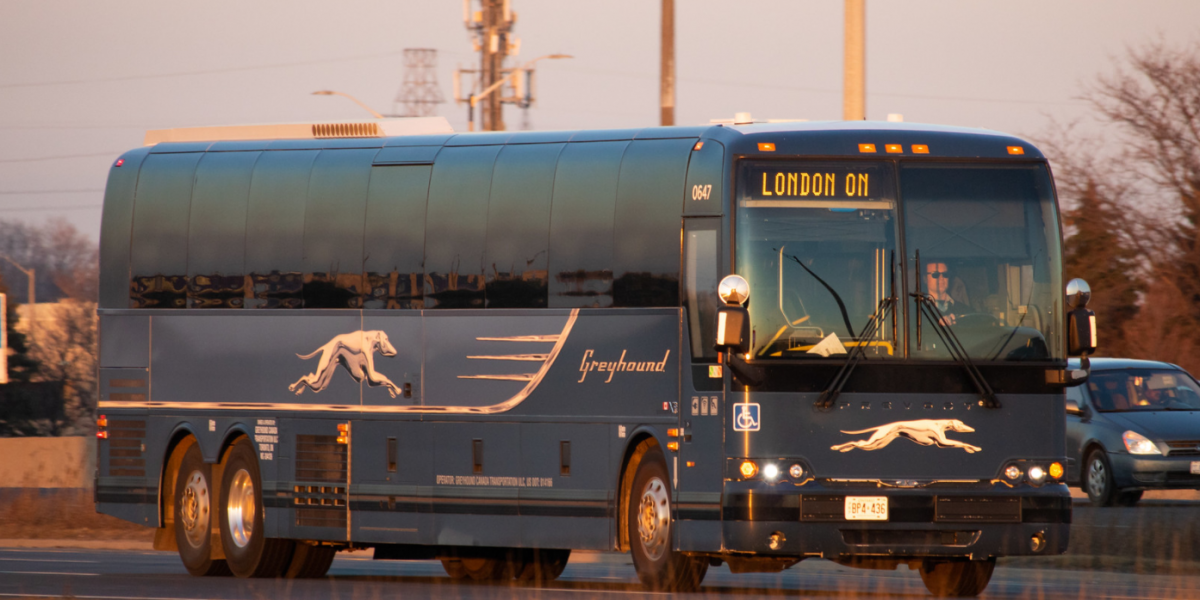 On May 13, 2021, private intercity bus operator Greyhound Canada announced it would permanently cease operations in Eastern Canada. The announcement comes one year after Greyhound suspended all Canadian service in response to the COVID-19 pandemic, and nearly three years after it permanently ended service in Western Canada.

The end of Greyhound service after nearly a century is without a doubt a devastating blow to millions of people across Canada. Greyhound was the only intercity bus operator to have anything approaching a national network. Without it, what remains is a haphazard patchwork of different intercity bus services not well integrated with one another across or even within regions. Many communities will now be left with no service at all, while others will have fewer scheduled trips to fewer destinations.

Those with the fewest resources and alternatives will be hardest hit. Greyhound was a crucial lifeline for all kinds of people who either cannot afford a private vehicle or are otherwise unable to drive. Certain groups of people will be disproportionately affected by the Greyhound closure, including: seniors, students, Indigenous people, recent immigrants, people with disabilities, those living on low incomes, and people in rural areas. This is not just a matter of convenience, but in some cases even a matter of life and death—the lack of bus service in Northern BC along the “Highway of Tears” was a key factor in the deaths of many missing and murdered Indigenous women.

Greyhound’s closure is also a major blow to efforts to tackle climate change. The main alternatives to intercity bus travel are driving in private vehicles, or in some cases flying, both of which are far more carbon-intensive. Efforts to reduce vehicle emissions (such as through electrification) are on their own inadequate, and a sound environmental response requires a shift from private to public transit combined with reducing carbon intensity of all forms of transit.

All this is not to say that Greyhound was ever the transit model we needed. Its demise will have immediate negative consequences, but it does open the door to a better alternative — universal, affordable access to publicly-funded, publicly operated intercity transit in Canada.

Canada has for many decades been a relative laggard in terms of all forms of public transit. Private car ownership is among the highest in the world, and Canadian cities are generally quite unfriendly to forms of commuting other than by car.

In terms of intercity transit, air travel predominates over very long distances and will continue to do so given the vast scale of the country. However, air travel has major downsides, it is expensive, carbon-intensive, and not practical for trips below several hundred kilometres.

For intermediate-range trips, passenger rail is sometimes an option. The federal government owned Canada’s largest railway, CN, from 1919 until 1995 when it was privatized by Chretien’s Liberal government. Privatization has been extremely lucrative for the private sector, and CN is today the sixth most valuable Canadian company, worth over $92 billion. CN’s money is made from its freight business. Meanwhile, federal Crown corporation VIA Rail Canada operates the much less lucrative passenger rail system (mostly on tracks owned by CN).

Governments of all stripes have allowed Canada’s passenger rail system to languish. The only part of the country with reasonably frequent service is the Quebec City-Windsor “corridor.” In 2019, VIA Rail ridership nationally was below 5 million, where once more than ten times as many boarded passenger trains. In addition to limited destinations and infrequent service, cost is a major barrier for many when it comes to rail. VIA Rail now uses “airline” pricing where ticket prices fluctuate based on demand. This makes it difficult to predict prices, and means high fares for anyone needing to travel at peak times. Finally, Canada has no high-speed rail service unlike most comparable countries, and performance is made worse by passenger trains having to regularly yield to freight traffic that is given priority.

Improved intercity rail service should be a priority for the federal government. That said, rail alone is not a complete solution to intercity transit. Shorter trips, and those off major rail lines, still require intercity bus service.

Of all modes of public transportation, intercity bus service in Canada has received the least attention from all levels of government. Generally, it has been treated as a residual mode of transportation for those without cars. Because it skews more heavily than other forms of transit towards providing service to lower-income people, governments have been more easily able to neglect it. Overwhelmingly, this has meant leaving private operators to provide rather patchy service.

Greyhound Canada has been the largest private intercity bus operator in recent years. It has been owned by London (England)-based transit conglomerate FirstGroup since 2007. Those who have taken Greyhound know well its serious shortcomings — rising prices, fewer and fewer destinations served, frequent scheduling delays, and decaying station infrastructure. The quality of service was not conducive to attracting riders who had other options, and this led to a progressive decline in ridership.

Few of those lamenting Greyhound’s end have any sympathy for FirstGroup and the ever-worsening service it provided (although great sympathy should be had for the hundreds of workers affected by the closure). Rather, the concern is that as it stands, there is nothing to fill the gap.

Some columnists are already declaring that other private sector companies will step in to pick up the slack. But, this is mostly wishful thinking. No doubt some operators will begin to offer service on some of Greyhound’s former routes, but it is hard to imagine anything as comprehensive as even Greyhound’s diminished former route network. Profit-driven intercity bus service will always remain inadequate.

Paving the way for public alternatives

It is possible to imagine how public alternatives could change the intercity bus landscape in Canada. It has been done before, and could be done again.

In 1944, Saskatchewan elected a Cooperative Commonwealth Federation (CCF) government (the forerunner to the NDP), the first social democratic government in North America. This government is most famous for having introduced public hospital insurance, followed by a Medicare program. However, it also made a huge breakthrough in the realm of public transit when it established the Saskatchewan Transportation Commission (STC)—a provincial intercity bus operator—in 1946.

Saskatchewan in the early postwar period was an incredibly difficult place to which to provide public transit. The 1951 census counted just over 830,000 residents, spread across a territory approximately the size of the UK and post-unification Germany combined. The largest city, Regina, had just over 71,000 residents, with most of the population living in small towns and rural areas.

Nevertheless, the CCF government set to work creating a comprehensive public bus network. By 1951, it had 446 stations province-wide. The STC’s formula was in many ways simple—that a real bus network needs lots of stations, and lots of buses, to be popular. While the STC sometimes turned a profit and sometimes did not, it had first and foremost a public interest goal of providing good, reliable, affordable transportation to Saskatchewan residents.

Sadly, the STC was increasingly neglected by successive governments. In 2017, the right-wing Saskatchewan Party government axed the STC altogether, causing outrage across the province.

There is nothing stopping the STC model from being recreated provincially or even federally today. What it requires is governments that are prepared to acknowledge intercity bus service as a social good with social benefits, and to directly deliver bus services.

There are already partial public bus services in some areas today. Ontario’s GO Transit provides train and bus service to an expanding portion of the province in and around the Greater Toronto Area. It is, however, still geographically limited, and heavily focused on providing service to and from downtown Toronto more than between other areas. Meanwhile, Ontario Northland provides bus service to parts of Northern Ontario. It is possible to imagine the Ontario government adding to existing infrastructure to provide public bus service across the province.

Any public bus service should have its core equity and environmental objectives—how to make sure service is as affordable, comprehensive, reliable and green as possible. These are readily achievable goals.

Unfortunately, many current governments in Canada are unwilling to expand public services, even where they are desperately needed. Leaving intercity bus service to the private sector has failed. It is time to build a better alternative.