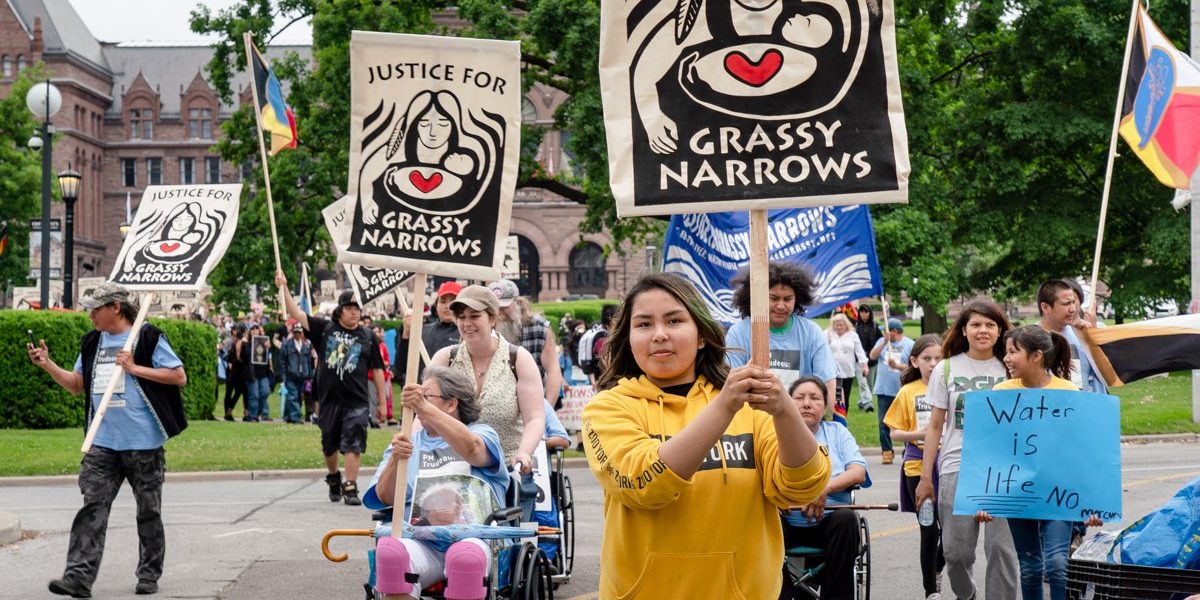 The people of Grassy Narrows have been fighting for mercury justice since 1970, and their struggles have informed and inspired anti-colonial and environmental justice organizing across Canada. The River Run, which started in 2010 and has taken place every two years since, sees members of Grassy Narrows travel to Toronto for a series of street-based actions and community events centered on raising awareness and demanding justice from the Ontario and Canadian governments. While the pandemic is preventing the River Run from taking place this year, members of Grassy Narrows and Free Grassy, a solidarity network, organized a jam-packed online rally on March 27.

The Online Rally for Grassy Narrows was attended by well over 200 people and focused on the need for compensation for all people in Grassy Narrows – a need that continues to go unmet by the Canadian and Ontario governments. The rally was moderated by Michi Saagiig Nishnaabeg scholar, writer and artist Leanne Betasamosake Simpson and opened by Garry Sault, an elder from the Mississaugas of the Credit First Nation and a longtime ally of Grassy Narrows, who also offered a smudge and prophecy song

People of the river

The fight by the Asubpeeschoseewagong Netum Anishinabek (or Grassy Narrows First Nation) against incurable mercury poisoning did not begin immediately after the poison was first in use by the Reed Paper Company starting in 1962, because its effects were not clearly understood. But within a few years, the First Nation invited experts from Japan to help them make the link between the company’s dumping of mercury into the nearby Wabigoon/English River system –  whose plentiful fish were the main food source for the Nation – and serious harm happening to the health of the people.

Chrissy Isaacs, a mother, grandmother, and land defender who was part of initiating the Slant Lake Blockade, began her talk with an ancestor song. Isaacs shared the myriad impacts that mercury poisoning have had on her community and the need for compensation for all. Isaacs noted:

“It’s fair to say that everybody in Grassy needs to be compensated. A lot of families struggle with appointments, special needs and education for our children … Physically, mentally, and spiritually too – the river was always a part of our way of life here. What I hear from older people is that we were river people. We were people of the river. A lot of our life was based on the river – fishing and living off the fish.”

Japanese researchers took an interest in visiting Grassy Narrows beginning in 1975, because in the 1950s one hundred people died in Minamata, Japan, and several people experienced brain damage from eating fish contaminated with mercury. Thus began the decades-long struggle for justice by the people of Grassy Narrows, located in northwestern Ontario.

In all, ten tons of mercury were dumped into the Wabigoon/English River system from 1962 to 1970. Mercury poisoning is passed along to the embryo in pregnancy, which has meant that younger generations of Grassy Narrows members have been affected by it, even after the contamination in the Wabigoon/English River system was discovered. Grassy Narrows members experienced neurological damage, which affected their hearing, eyesight, breathing, and people began having tremors, slurred speech, and cognitive disabilities. Once health effects became exposed in the 1970s, the dumping was reduced and new cases of poisoning have lessened. But as the years went on, members began aging and dying prematurely. Depression and other mental health issues emerged following the loss of the use of the river, which had always been an inherent part of life.

Chief Randy Fobister of Grassy Narrows spoke of the crucial role that the Wabigoon River has played in the life of his family and community, and the devastation that has been caused by mercury poisoning, noting that “once mercury goes inside our bodies, there’s no going back.”

He shared the constant grief that his community endures as both elders and young people die of complications related to mercury poisoning. He reminded those listening that while the struggle will be ongoing for many years to come, the gains made over the past 50 years have brought him a sense that there’s light at the end of the tunnel.

“I’d like to see one day where a grandparent will travel with his grandkids, and they paddle along the river,” said Fobister. “And I’d like to see that youth drink from the river. In 20 or 30 years time – that’s my dream, for that to happen again.”

As recently as July 2016, investigative journalists obtained cabinet memos dating back to 1984 that showed friction between the Premier and Environment Minister and cabinet members over a plan to remediate sedimentary mercury that threatened perpetual fish contamination. The report recognized that inhabitants of the river system would continue to consume contaminated fish due to misinterpretation, hearsay and distortion, and mentioned potential health risks. The primary impact of mercury contamination was deemed to be economic, social and cultural as a result of lost employment, food sources and traditional way of life.

Tanya Talaga, an award-winning journalist and author from Fort William First Nation, spoke of the treachery of the Canadian state when it comes to the taking and polluting of water. “Our nation to nation agreements are treated as if they are not the laws of the land – but they are,” said Talaga.

She connected the struggles for clean water in the English/Wabigoon River system to broader injustices of colonization, stating:

“From Neskantaga First Nation – a community with the longest boil water advisory in this country – to Shoal Lake 39 to Shoal Lake 40 to Grassy Narrows to White Dog, Canada consistently ignores its treaty obligations. That includes so many things. That includes healthcare – proper healthcare – for our people. Not a two-tiered healthcare system, as what we’ve seen in Grassy, Kenora and Sioux Lookout. … When there’s no access to clean water, how can you have a medical clinic? … I think about the people of Grassy, and I think about what has happened to the English/Wabigoon River system, and I think that this is one of the most despicable, shocking, deliberate acts – the poisoning of the water.”

While the Ontario government committed C$85 million in 2017 to clean up the river, no clean-up has started. The government also committed to the construction of a Mercury Care Home, a health centre that will provide culturally relevant health services to survivors of mercury poisoning and all Grassy Narrows members. To date, only 14% of members have received any financial compensation for the loss of their food source, income (commercial fishing and guiding), and serious physical and mental health conditions arising from the poisoning.

Judy Da Silva, who has been engaged in this resistance for her whole life, spoke from the site where the Shoal Lake Blockade took place in 2002. She spoke of the racism she and her community have experienced from healthcare providers when they have attempted to access treatment for mercury poisoning, and her hopes that the Mercury Care Home will finally offer humane care to the people of Grassy Narrows. She reminded those in attendance of how crucial solidarity is to this struggle.

Da Silva added that, “the fight is still going to be long. And I’ll continue as long as I can, and I wish you the same – that you’ll stand beside us.”

The rally also included a number of pandemic-proof actions, including a phone zap to federal and Ontario politicians to demand immediate compensation for all in Grassy Narrows and the launch of the upcoming Compensation for All poster drive.

Standing Up For Racial Justice (SURJ) led a resource redistribution session to raise funds for the next River Run. As Scout from SURJ Toronto explained, “We cannot accept colonial violence, environmental racism, broken treaties and promises, or stalled action from the governments. We will not let Grassy Narrows fight for justice on their own. We remember what is possible when we show up together with Indigenous people and leadership.”

Syed Hussan from Free Grassy and Migrant Workers Alliance for Change spoke of the long history of denial by the Ontario and Canadian governments about the injustices faced by Grassy Narrows, and the commitment to lasting solidarity that this struggle necessitates:

“For over half a century, Grassy Narrows has been fighting for justice and for over half a century, Canada and Ontario have first refused to act. … Today Grassy is saying to us that the entire community needs compensation, needs reparations, and first Ontario and Canada will say, again, that it cannot be done. And Grassy knows that for half a century that ‘no’s’ cannot be taken as what they are, but as an obstacle to overcome. … What is needed is for us to walk this journey with Grassy Narrows … Each and every one of us, in organizations that we are in, must commit to making Grassy a central part of our work. … Grassy has shown us that struggle produces results.”

Garry Sault closed the rally by offering a song marking the beginning of maple syrup and fishing season. He noted that it was “appropriate that we start this journey homeward bound, to spread the word in a good way that Grassy Narrows is once again seeking donations to make the federal and provincial governments own up to their responsibilities.”

The long struggle for justice in Grassy Narrows continues, and there are lots of ways individuals and organizations can show up in solidarity: