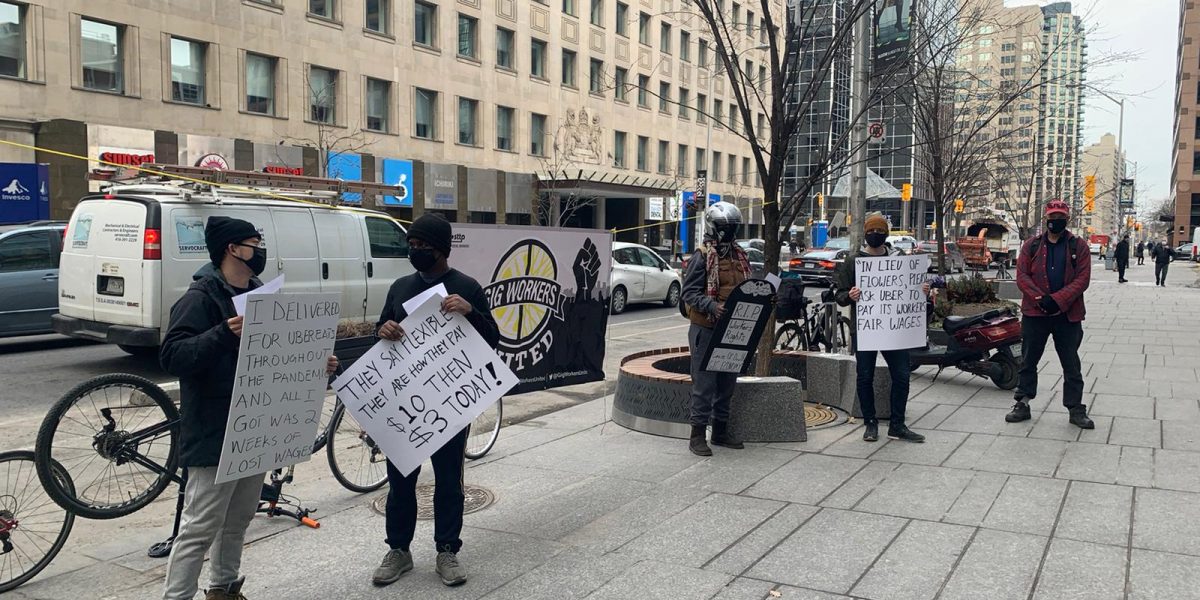 On the morning of March 10, Uber Canada announced a proposal to Canadian provincial governments to provide worker benefits to couriers while maintaining the “flexibility” the app is known for.

Gig Workers United, a union for couriers and platform-based workers, immediately recognized this as a tactic to introduce labour reforms without reclassifying independent contractors as employees. This is a well-known strategy to deny accountability for worker’s safety and protection.

Demanding stability instead of “flexibility,” members and allies of Gig Workers United demonstrated in front of Uber’s headquarters in downtown Toronto on Wednesday. One of the organizers, Ivan Ostos, mentioned that the union chose to gather in front of Uber’s engineering hub because the Greenlight hub, which is where couriers are on-boarded and are supposed to go for issues, have been closed since the pandemic began. “We don’t have a space where we’re even allowed to go in,” he added.

The precarious working conditions of the gig economy is nothing new. But things are escalating as tech giants such as Uber continue to propose aggressive market reforms that are against workers’ interests.

Pay cuts during the pandemic

Uber has emerged as a major pandemic profiteer, cutting earnings by almost 60% over the last year. The company introduced changes to its wage structure and lowered its base fare, making earnings dependent on tips and rush-hour “boosts.” Couriers claim that “boost” pay has been decreasing over time as well.

In Uber Canada’s press release, the company positioned itself as a platform for flexible “side-hustle” but ignores the reality of the gig economy where many couriers do this as a full-time job. Additionally, many have turned to working as couriers for Uber and other food delivery apps as a result of increasing unemployment during the pandemic. These cuts are a massive setback for workers whose sole earning may now be through app-based employment.

Recently, a full-time UberEats worker, Narada Kiondo, found himself locked out of the app. Without access to Uber’s support line and the Greenlight Hub being closed, Kiondo spent two weeks without compensation while not being able to request a resolution. According to Gig Workers United, these deactivations have been happening at random to multiple couriers without any advanced notice.

“Uber has a habit of deactivating people,” explains Ostos, whose account also underwent an arbitrary deactivation.

“Deactivation means they’re essentially fired,” he adds, “They’re unable to sign on and do work. And that could happen for tons of reasons. It could be you’re riding too fast – so they say that you’re a car and they deactivate you. It could be because a customer makes a complaint that isn’t true.”

Without any workplaces negotiation process in place, couriers have no way to challenge unfair termination of their employment. Gig Workers United stresses the importance of being able to organize in order to push back against the impunity of Uber and other app-based employers.

Uber claimed that couriers preferred their new Flexible Work+ program which maintains the traditional independent contractor model over employment status, but organizers at Gig Workers United reject this claim. The union has been fighting to achieve employment status with Uber in order to ensure job security for workers.

“There is already a worker category in Ontario called dependent contractors that we have fought for in the past with other gig employers like Foodora.” says Ostos, “So I don’t trust that what Uber is going for is going to be in our favour.”

The union instantly recognized the similarity between this proposal and Proposition 22 in California which exempted app-based employers from providing workers with employee status and benefits. Uber’s version of workplace reform reinforces a business-friendly approach that undermines workplace organizing. It is not a surprise then that the Prop 22 ballot was extensively supported by Silicon Valley capitalists who benefit from the loose contractual status of app-based workers.

The most alarming aspect of Prop-22 is how it deters workers from unionizing. Not being able to organize means not being able to advocate for better working conditions, paid sick days, etc. and puts workers in a precarious state especially during a public health crisis.

But the union is prepared to take on “Prop-22 North”. Just last summer, a Supreme Court decision opened possibilities of couriers being recognized as employees and demand living wages and protection. With other international wins such as the recent court decision in the UK recognizing couriers as employees of the app, the multinational tech giant knows that workers’ resistance is on its heels and Uber is doing all it can to prevent it.

While UberEats pours money into marketing schemes hiring “woke” celebrities as their ambassadors, they are committing wage theft from their workers in the middle of a global pandemic. Gig workers demanded better earnings, transparency, and respect, but got served an anti-union proposition they never asked for.

Uber Canada’s proposal to lobby provincial governments will not stop couriers from fighting back and resisting these anti-labour reforms. As Brice Sopher, a member of Gig Workers United noted, workers’ rights are never championed by employers, and unionizing is the best way to have an authentic democratic voice.