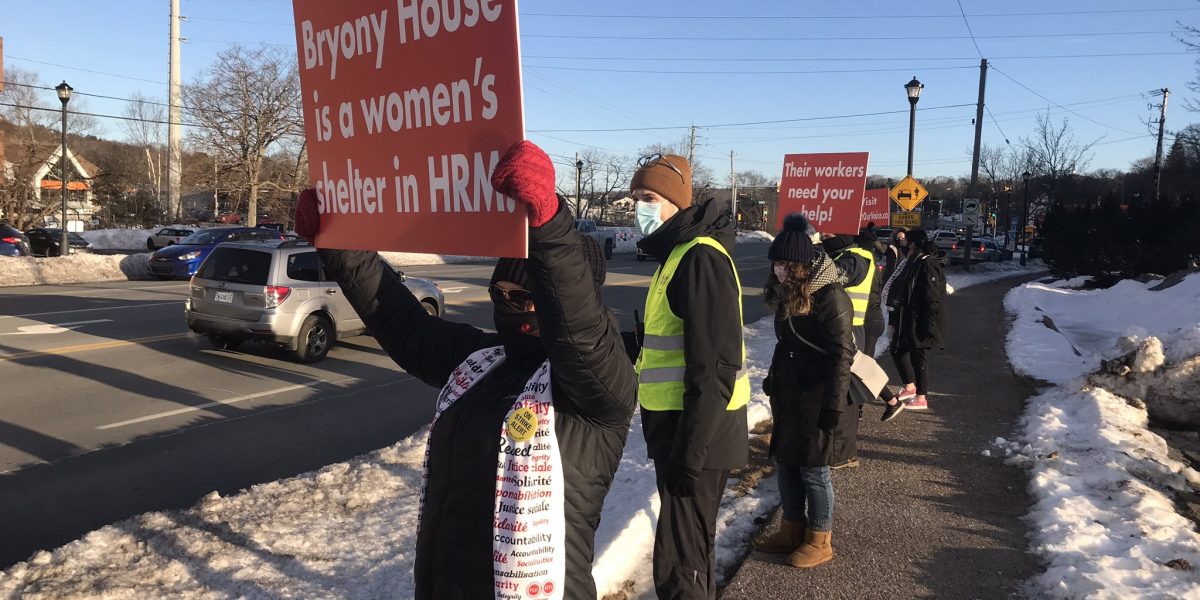 On February 23, 2021, workers at Bryony House were in a legal position to take strike action. There were two outstanding issues at the bargaining table: worker representation on the board of directors, and paid leave for workers experiencing domestic violence. The strike was averted when a tentative agreement was reached on February 19 and later ratified on March 8 – International Women’s Day.

Bryony House is a 24-bed shelter operated by the Halifax Transition House Association (HTHA), and provides 24-hour emergency services for women, with or without children, escaping intimate partner abuse. It opened in 1978 as the first transition house in Nova Scotia. About 470 women and children stay at the facility each year. Trained counsellors operate a 24-hour distress line, provide both individual and group counselling, and engage in public education, outreach, and advocacy.

Public Service Alliance of Canada (PSAC) Local 80022, the union local representing the 23 unionized workers at the Halifax-area women’s shelter, negotiated 10 employer-paid days off for workers experiencing domestic violence. They also ensured that the new collective agreement maintained three seats for workers on the organisation’s board of directors; an arrangement in place since the 1990s.

This shows how frontline workers are leading struggles for gender justice that we all benefit from.

The fight for legislated Domestic Violence Leave in Nova Scotia

The impact of domestic violence on working survivors can be extensive and debilitating.  “Domestic violence impacts so many, but it is often not discussed at work because people are afraid it will impact how their boss sees them,” says Kelsey Crawford, who had to work while under constant physical threat by her former partner.

“I had a serious concussion. My head was in a fog. The situation consumed me, and it was impossible to concentrate at work because I was also fearing for my life,” says Crawford. “It was horrible.”

Her employer, she says, was unsupportive. “I was made to feel like requesting the time off I needed was unprofessional, as if I was bringing my personal issues to work with me.  But I only told my employer because I wanted to be straight forward.  They just didn’t seem to care.”

Crawford says that the three legislated employer paid domestic violence leave days in Nova Scotia is a start but is not enough.

“Going to the emergency room, attending medical appointments, going to therapy, exploring legal avenues all take so much time out of a regular 9-5 working day,” she says.  “More time is often needed.  Plus, with more legislated domestic violence leave days, it won’t be as easy for an employer to give you a hard time when you already have enough on your plate.”

Kristina Fifield has been a women’s counsellor at Bryony House for 11 years, and she serves on the union local’s joint Labour-Management and Occupational Health and Safety (OHS) committees. She says that all workers need paid domestic violence leave (DVL) to ease the financial pressure of getting support and time off when they need it. “Domestic violence almost always makes its way into the workplace in some shape or form,” Fifield says, “and workplaces need to support and provide safe space for employees who are impacted. This includes paid domestic violence leave.”

The workers at Bryony House have a leading role in expanding access to paid DVL because of the nature of the work they do. Fifield says paid DVL is important for the workers at Bryony House because “we see the impacts of abuse and trauma every day in our work with our clients.” Fifield adds that “transition houses and domestic violence services need to be leading and advocating in our communities for longer-paid domestic violence leaves. We need to continue to bring attention to this very important issue both within our workplaces and pushing the government to make this a priority.”

Workers at Bryony House are not the first to fight for paid DVL at the bargaining table in Nova Scotia. In June 2017, workers at The Elizabeth Fry Society of Mainland Nova Scotia (EFMNS) were the first in the province to negotiate a contract that specifically guarantees domestic violence leave. The Nova Scotia Government and General Employees Union (NSGEU), the union representing the unionised workers at the EFMNS, adopted a motion to fight for domestic violence leave at a provincial convention prior to the workers at EFMNS negotiating that contract. As a non-profit organisation that provides support for women and girls involved in the criminal legal system, workers at the EFMNS set a standard for other frontline workers to build upon.

Through efforts like these, workers have achieved some legislated domestic violence leave in Nova Scotia. Today, under the Nova Scotia Labour Standards Code (‘the Code’), all workers in the province who have been employed for at least three months are entitled to time off work if they or their child experience domestic violence. As of January 2019, workers governed by the Code can take up to 10 days off intermittently or consecutively, but only three of those days are guaranteed to be paid.

The Treasury Board of Canada and several unions have gone further, guaranteeing 10 days of paid leave for federal workers experiencing domestic violence. The unionised workers at Bryony House have been fighting to bring provincially-regulated workers up to the federal standard.

Advocating for paid domestic violence leave is only one way in which workers who are women, trans, Two Spirit, or non-binary are leading struggles for justice that we all benefit from.

The Out of the Cold Community Association runs a 25-bed winter shelter in downtown Halifax that provides not only a place to sleep, but also daily meals, washrooms, showers, warm clothes, supplies, and resources for housing solutions. The Association provides low barrier, people-centred support rooted in anti-oppressive and harm reduction practices. In December 2020, workers at Out of the Cold unionized with the Service Employees International Union (SEIU) Local 2.

For Katerina Stein, a frontline worker at Out of the Cold, the importance of unionizing shelter workers is both personal and political. “The majority of my staff team are either female identified, non-binary, genderqueer, and/or queer, and this is true about many in the ‘care worker’ field,” they say, “Often folks in these fields are expected to go above and beyond, to work extra hours, do extra things, put our mental and physical health on the line for our work.”

“Being unionized means that we are honoured for the work we put in, and fairly paid,” Stein says. “It means that we have support in maintaining our workers rights. It secures our right to continue to advocate as frontline staff within our organization. All in all, it means that many of us will be able to continue to do this work for the long haul, which means being better able to serve our clients and residents. It means we have the energy to tackle these oppressive systems every damn day, and show up for the folks we work with in the way they deserve.”

While struggles against patriarchy come to a head in frontline workplaces, the governing Nova Scotia Liberals have advanced their own version of gender justice. On February 5, former Premier Stephen McNeil announced his government’s decision to give $5-million to a venture capital fund investing in women-led businesses. McNeil claimed that the decision was made to help women to “be active members of our economy.”

The groups criticised the decision as “trickle-down economics,” a long-debunked theory of economics that claims  giving more money to rich people will eventually benefit everyone. The group proposed alternative ways the government can promote gender justice in the economy.

“If the government wants to help women,” the letter states, “it should rescind this $5 million corporate giveaway—and all corporate giveaways, for that matter—and invest that money towards increased capacity at women’s shelters and improving the affordability of childcare in the province.”

Out of the Cold Association’s Katerina Stein sees frontline workers leading struggles against economic injustice and oppression and recognizes that no one is free until we all are.

“I think not placing the work we do in the context of racism, capitalism, sexism, transphobia, etc. would be a grave mistake.” Stein explains, “Workers rights, gendered oppression, homelessness, colonialism — these struggles are all intertwined in each other. It is nowhere more evident than with the folks we support – many of whom battle a multitude of oppressive systems on the daily.”

Frontline care workers – many of whom are women, trans, Two Spirit, and non-binary – play a central role  in advancing the struggles against all oppression through their workplace campaigns and unions. As Kristina Fifield, women’s counsellor at Bryony House, explains, “When unionized front-line workers go to the bargaining table, they need to be looking at how they can build a stronger collective agreement for both workers and their clients. We all need to strategically think of our priorities for the bargaining table.”

“There is a lot of power when a union takes a stand against oppression and injustices happening around larger movements.” she adds, “Standing together in solidarity with other unions and unionized workers strengthens the work ahead. Do not underestimate the power that unions can play in addressing oppressions and injustices! Know your rights, use your voice, and use your power as workers by standing together to advocate against injustices and oppressions.”