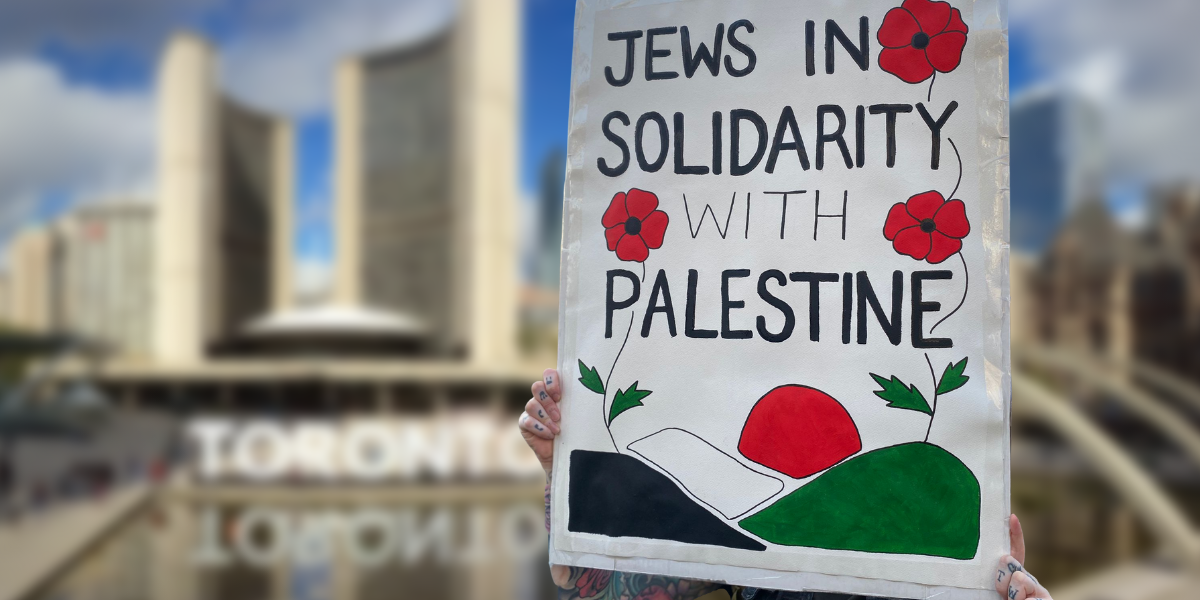 If you want to get a reading of the level of fear and paranoia in some parts of the Jewish community right now, you might want to check out the Facebook group “Everything Jewish Toronto.” Once a place to get tips on who makes the best bagels or where to find the best rugelach, its members have recently begun trading tips on how to avoid attacks.

“Lynch mobs are planned for tonight,” announced one post, warning Thornhill Jews that anti-Semitic attackers were “targeting anyone visibly Jewish as well as houses with mezzuzahs.” As another warned, “Palestinians will be at the Promenade this afternoon to start trouble. DO NOT GO OUT. It is a trap!”

The United Jewish Appeal (UJA) sent out a series of alarming email blasts, encouraging Jews “to exercise awareness and vigilance as they go about their daily lives.” More recently, Jewish residents in Toronto and York Region have set up a chapter of Shomrim, a neighbourhood watch group of volunteers who patrol Jewish neighbourhoods and synagogues to protect them from anti-Semitic attacks.

For Jewish people who are already on edge, social media has created an echo chamber where their worst fears are affirmed and amplified by like-minded people who trade stories about synagogues vandalized, slogans chanted at anti-Israel rallies, and people verbally attacked. Suddenly,  they’re seeing anti-Semitism everywhere. A smashed window at the What a Bagel bakery in Forest Hill sparked a meme announcing that vandals had targeted the store “because it’s owned by Jews.” The owners took to Instagram to reassure the concerned that it was just a “standard smash” by thieves who grabbed the money in the till by the window.

But it isn’t fear of rockets from Hamas that has got some people spooked. It’s the fact that Israel’s supporters were on the defensive against an unprecedented show of public support for the Palestinians, as well as a changing media landscape where critical opinions about Israel are now leaking through the cracks. Indeed, the traditional pro-Israel consensus that has long dominated the corporate media is now overwhelmingly being circumvented by new social media, where solidarity with Palestine is growing. Even in mainstream media — take, for example, John Oliver’s Last Week Tonight coverage — the typical “both sides” argument is rapidly falling out of vogue.

By most indicators, the Jewish community in Canada is doing well. We have the same problems that beset most communities – many Jews suffer from poverty, mental illness, or sexual abuse, and face discrimination based on age, gender, race, sexual orientation, and so forth – but by and large, the community enjoys a level of economic prosperity, state support, and social and cultural integration that make us one of the most successful minority groups in Canada. And yet Zionism is fanning waves of fear and warning of widespread and imminent attacks.

While it’s true that we Jewish people often joke about having a heightened imagination for disaster – if we wake up with a headache, we’re likely to think it’s a tumor – let’s begin by acknowledging that anti-Semitism does exist in Canada, and has a long history. Sure, there are no more signs on hotels saying “No dogs or Jews allowed,” no more quotas on Jews in universities, and no more neighbourhoods where Jews are restricted from buying homes. But in my home province of Quebec, Bill 21 effectively bars religious Jews (and religious Sikhs and Muslims) from entering the civil service by prohibiting them from wearing the head coverings required by their faith.

Curiously, the current wave of fear has nothing to do with the most discriminatory piece of state-sponsored legislation against Jews in this country right now. Rather, it stems almost entirely from the fall-out surrounding  the recent spate of violence in Israel-Palestine, resulting in the deaths of over 200 Palestinians and 12 Israelis.

Here in Toronto, thousands of people showed up to demonstrate outside City Hall, filling Nathan Phillips Square. Among them were hundreds of young Jewish people, who far outnumbered the small and motley crew of pro-Israel counter-demonstrators, most of them affiliated with the far-right Jewish Defense League (JDL), an organization banned in Israel and declared a terrorist organization in the United States.

Despite the fact that the protests were largely peaceful and that large numbers of Jews were in attendance, it didn’t take long for a narrative of violence and anti-Semitic hatred to emerge. Mayor John Tory fed the trolls and created needless panic in the Jewish community by tweeting, “Hate, anti-Semitism and violence have no place in our city.” Then the National Post published a sensationalized story about an elderly Jewish man who was violently attacked by pro-Palestinian protestors, only to have to issue a correction the following day when it was revealed that the elderly man was a knife-wielding provocateur who belonged to a motorcycle club associated with the Jewish Defense League and who was caught on video provoking the very fight he was injured in.

Bernie Farber, the former head of the now defunct Canadian Jewish Congress, went on social media to denounce what he called “fear mongering in the Jewish community,” saying that “rumours of violence aimed at Jews” was “the worst kind of nonsense.” Unfortunately, many community organizations have continued to fuel needless panic. “If you aren’t yet concerned about rising antisemitism in Canada, you should be,” warned Shimon Fogel, CEO of the Centre for Israel and Jewish Affairs (CIJA), in a recent editorial for The Globe and Mail.

B’nai Brith, like its US counterpart, the Anti-Defamation League (ADL), has for several years been publishing annual reports of anti-Semitic incidents, demonstrating  a steady rise in such incidents over the last few years. But these reports are highly problematic. Mari Cohen published a study of the ADL data in Jewish Currents, noting that these lists of anti-Semitic incidents conflate acts of varying severity so that anti-Semitic graffiti, anti-Zionist chants at pro-Palestinian rallies, and violent physical assaults on Jewish people are simply counted collectively as “anti-Semitic” incidents.

Also lacking in the reporting is a distinction between acts of prejudice and acts of oppression, which are not the same thing. Everyone has prejudice, and to experience it is not fun. But not all forms of prejudice are oppression, and they should not be confused. A poor person might have contempt for rich politicians, but that contempt won’t have the same impact as rich politicians who have contempt for the poor. Prejudice needs power to become oppression, and in a climate of mass hysteria, it’s important to be able to distinguish between the two so we know what level of threat we’re dealing with. Otherwise, small incidents get inflated into weighty ones, and this serves no purpose but to spread needless fear.

In their email blasts, CIJA and the UJA urge people in the Jewish community to call police to report anti-Semitic incidents should they see or experience them. Yes, anti-Semitic acts might be occurring and need to be challenged. But the fact is that if we were dealing with extreme anti-Semitism, they would not be urging us to go to the police for help. They’d be helping us hide from the police. The fact that so many Jewish people in Canada trust the police suggests that, when we’re talking about anti-Semitism in Canada, we’re talking about prejudice, not oppression – which is awful, but it doesn’t compare to what Black or Indigenous people face in this country.

Anti-Zionism is not anti-Semitism

Further muddying the waters is the fact that almost all of the Jewish organizations gathering data on anti-Semitic incidents have been using the problematic “working definition” of anti-Semitism promoted by an intergovernmental organization called the International Holocaust Remembrance Alliance (IHRA). Pro-Israel organizations in particular have been lobbying governments all over the world to adopt it, and many have, including the Ontario government, which adopted a watered-down version of it last fall.

This “working definition” lists a number of acts it considers anti-Semitic, some of them obvious and irrefutable – holding Jews collectively responsible for the real or imagined wrongdoings of a single individual, for example – but others are far more problematic. The IHRA, for example, argues that it is anti-Semitic to deny “Jews the right to self-determination,” an example of which is to claim that “the existence of a State of Israel is a racist endeavour.” This would designate the entire history of bi-national Zionism, whose proponents included Albert Einstein and the Jewish philosopher Martin Buber, as anti-Semitic, to say nothing about the Satmar Hassidism, who oppose Zionism on religious grounds, seeking self-determination through adherence to the Torah, as centuries of Jews have done.

The IHRA definition of anti-Semitism does what it says anti-Semites do – single out Israel – by shielding it and it alone from accusations of racism. That a growing number of people, including Jews, refuse to do so is interpreted by some people in our community as evidence of widespread and deadly anti-Semitism.

Finally, let’s acknowledge the fact that there is a lot of very real intergenerational trauma in the Jewish community. Not only have we not properly dealt with it, but we make it a sacred mission to pass it down “to every generation,” to borrow the Talmudic phrase. While holidays like Passover and Purim are about passing on a collective memory of slavery, persecution, and liberation from suffering, the lesson we’re often taught about the Holocaust is far more bleak: We’re on our own, the world is our enemy, God will not save us, and the only thing we have to protect us is Israel.

We can talk about “Jewish fragility,” or how some discussions of legitimate Jewish fears can sometimes be exploited to shut down conversations about what Israel is doing to Palestinians, refocusing it instead on Jewish suffering. I wouldn’t have much of an argument to make against any of these accusations. But I will acknowledge that, while the cause of Jewish fears is partly self-inflicted, partly manufactured, and greatly disconnected from reality, the fear is real, and it’s preventing us from listening, from learning, from healing, and from fixing the mess we’ve inherited.