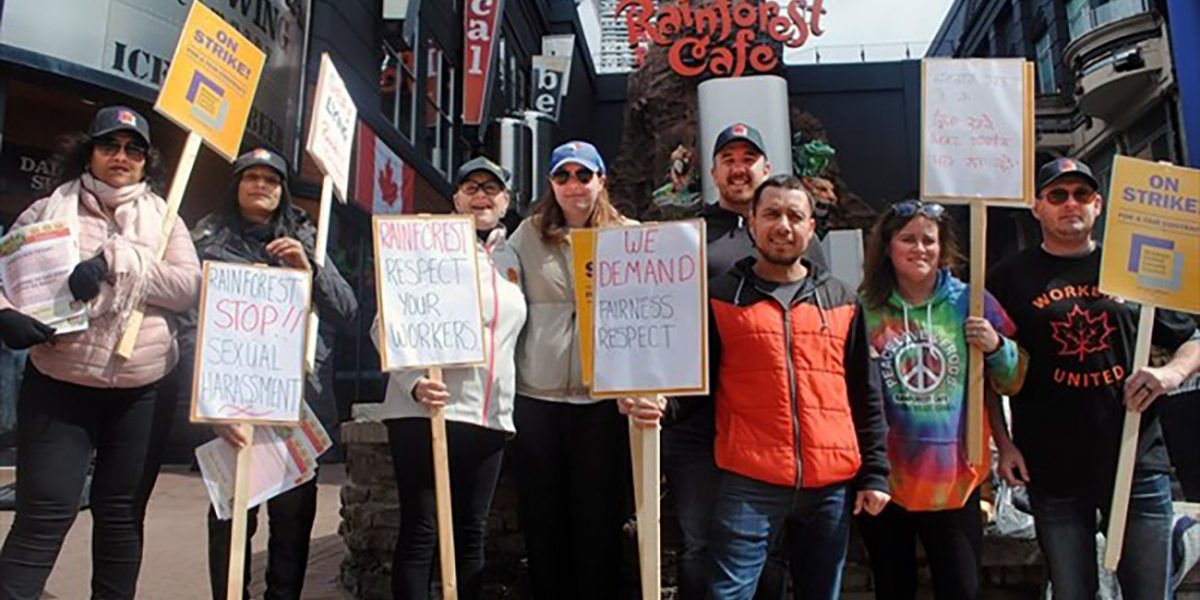 “We hear the stories of bussers waiting for the tip out at the end of the month to pay their rent, and of servers buying groceries with their tips,” says Eric Nordal, project coordinator with Retail Action Network (RAN). “That’s how people are surviving off of this income. It’s not just the icing on the cake at the end of the month. It’s a very important part of people’s income.”

That’s why at the end of April, RAN, a network of retail restaurant workers and labour activists in British Columbia that fight for higher wages, improved conditions, and workplace justice for workers in the service industry, welcomed provincial legislation protecting tips. The proposed BC legislation mirrors legislation passed in Ontario in 2015.

The BC Government announced legislation meant to ensure that a worker’s gratuities, in response to rampant tip theft, are protected under the Employment Standards Act. Employers across BC, RAN notes, have used what are known as tip pools – where tips are collected and divided up in various ways among servers and other staff supporting the service – to give bonuses to their management team, or to add profits to their business.

In BC, without protections, there was no transparency about who was receiving portions from the tip pool. “Employers could use that [their power to allocate tips] as a form of disciplinary action on staff,” says Nordal. “Maybe they’re not getting along with a certain person so all of a sudden they’re not getting tips.”

Before the new legislation, there would be no validity to the case when RAN would file an employment standards complaint against an employer. The tips just weren’t considered to be protected as wages – or even considered to be wages.

Now, when a worker goes to RAN with a tip theft complaint, Nordal says “we can legitimately make a claim through employment standards.”

“To have a major part of your income have no protection, just adds to the precarity of the work,” says Nordal. “For us it’s not just about being able to retrieve lost wages – it’s also the shifting of the power dynamic that exists in the workplace. The employer has less opportunity to hold this over people’s heads as a disciplinary action or make people put up with harassment or abuse in the workplace because they know those tips could just disappear. The fact there’s more security in those wages means workers can stand up to their employer with more confidence.”

“Unfortunately I think the government here caved into the industry pressure a little bit and there’s a loophole, a grey area, where there’s still an opportunity for the employer to manage and control the tip pool,” says Nordal, “and so isn’t totally clear yet how that’s going to play out once the legislation becomes law.”

Both the proposed legislation in BC and and Ontario’s laws protecting tips fall short around rules managing tip pools. This is one of the main issues for the workers at Rainforest Cafe in Niagara Falls. They’ve been on strike for just over a month, fighting for a first contract after forming a union with Workers United Canada Council Local 2347 early last year (RankandFile.ca published two pieces about it here and here).

Shortly after Ontario’s minimum wage increased in January of last year to $14/hour, Rainforest Cafe increased the tip out rate – one of the main issues convincing the workers they needed to form a union.

Before the employer increased the tip out rate, according to Shaun Watson, a server/bartender at Rainforest Cafe for 15 years, they would tip out to the tip pool but it was 3.25 per cent as opposed to the current 4.5 per cent. And previously, a large chunk of their tip out was based on just food sales – not including drinks which are often a large part of the bill. Now the 4.5 per cent tip out rate is based on their total sales. “We’re now tipping out more than double of what we were tipping out before,” says Watson.

Last year, Chris Mason, Chief Operating Officer Canadian Niagara Hotels (CNH), which operates Rainforest Cafe, among other establishments, penned a letter sent to workers. “As you are all aware, changes to Ontario’s Employment Standards Act and Minimum Wage took effect this past January 1st and like many business in the hospitality arena, we have seen an extraordinary change to our cost base that requires us to modify how we do business going forward,” Mason wrote. “Under normal circumstances, minimum wage increases are not impactful, however with a 21% increase in 2018 and an additional 7% increase scheduled for 2019, our business has to change or frankly, we will not be a viable business going forward. As such, we changed the tip-pool policy both increasing it and providing either greater gratuity to restaurant employees who had previously received gratuity or adding other employees “employed only by the restaurant” to have gratuity become part of their total income.”

What Mason leaves out is that, according to Watson, Rainforest Cafe “alone makes $11-million a year” and “broke sales records last year.”

There’s no transparency about where that money’s going, with concerns that much of it is ending up in the pocket of management. And since bartenders and servers can be paid below the minimum wage, of $12/hour, it’s becoming clear that instead of increasing wages by taking it out of their profits, employers are managing and manipulating tip pools. “Minimum wage goes up a dollar,” says Nordal, “the tip out goes up a percent.”

Currently, Rainforest Workers continue to walk the picket line. On Monday, May 6, they got a revised offer from the employer that included no real movement on the key issues, which includes that of tipping.

Today, Workers United Canada unveiled a new website calling for a boycott of Canadian Niagara Hotels Inc. And also today, The Ontario Federation of Labour, has issued an official boycott declaration of (CNH).

“During this boycott, no labour organization will engage in any new business with or buy products or services from Canadian Niagara Hotels or its subsidiaries, until the company sits down to bargain a fair collective agreement with its workers,” Ontario Federation of Labour President Chris Buckley was quoted as saying in a media release. “The strength of our movement comes from our solidarity. Together we are sending the message that this employer must end its continued mistreatment of workers, anti-union behavior, and refusal to bargain in good faith with their unionized employees.”

To find out more information about the boycott visit cnhboycott.ca

This is shared from rankandfile.ca