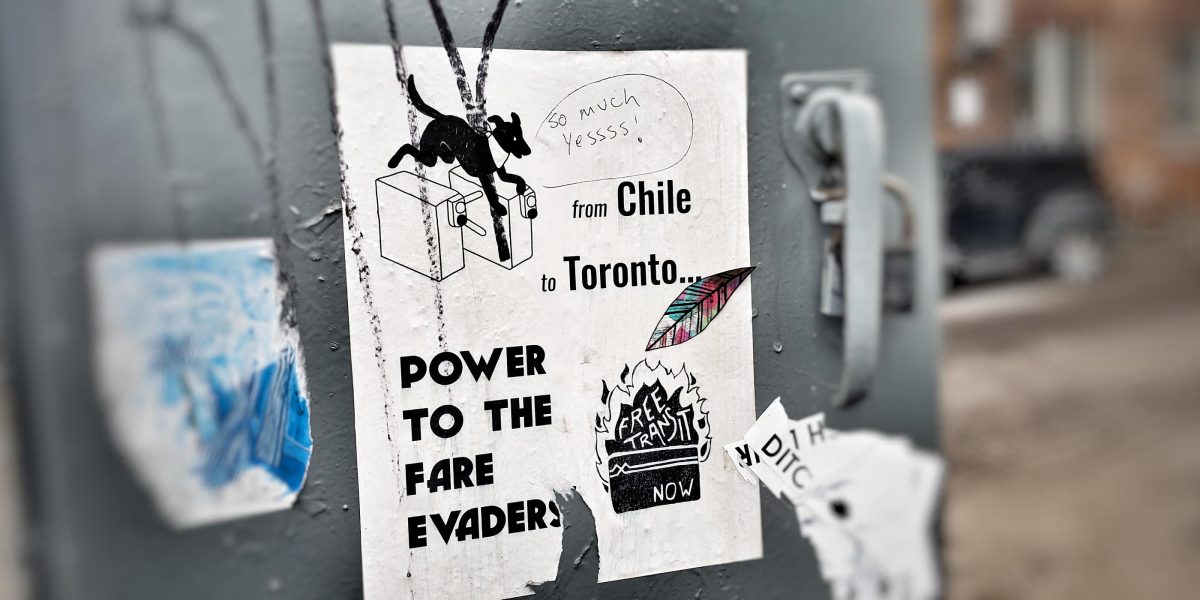 There are fare evaders, there is being accused of fare evasion and then there is being shamed for not being able to afford the fare. Connected but different issues that could all be addressed by making transit free.

No one, except city and Toronto Transit Commission (TTC) officials, know how much money their fines generate or what all that money is being used for. If the TTC is losing so much money from fare evaders, then how much money are they making from prosecuting their own customers? Torontonians should also persuade the city and some of its councillors to stop using the problem of some riders not paying properly as their excuse for the city and province not funding public transit properly.

The TTC is quick to splash a high number of alleged fare evaders across the headlines. In reality, a large percentage of fare evaders includes customers being targeted, harassed and blamed for equipment that does not work properly. Fare evasion statistics are grossly inflated due to a high number of Metrolinx’s PRESTO machines malfunctioning.

Paying fines and/or appearing before a city judge is essentially mandatory. The system is designed to ensure pleading innocent is futile. If you plead innocent you assume you will get an opportunity to explain your unfortunate situation of being a victim of a broken machine to a prosecutor and a judge. But what I witnessed was a city judge announcing to the court that customers would be deemed responsible for fare evasion even if the machine is broken.

Prosecutors are not there to listen, or to help you access justice. Their job is to tell you that, regardless of what actually happened, you can avoid court only by paying a lesser fine and pleading guilty even when innocent.

So it is for a very large number of TTC riders who are desperate to avoid court; they have to plead guilty even if innocent. The resulting inflated, inaccurate fare evasion statistics are held up as facts to be repeated with disgust by some city officials. Transit riders who have had to deal with the courts are disgusted by this process. As the Toronto based journalist Davide Mastracci points out, “not paying a fare on the TTC can lead to a $425.00 fine, while the average Toronto parking ticket, which also penalizes use of a transportation resource without paying, is only $30.00.” Why such a huge difference in fines?

Free and accessible transit for all

Currently the city’s focus is to hunt down fare evaders. This includes shaming people who cannot afford the fare. I witnessed a bus driver let someone on the bus who humbly asked the driver for a ride trying to explain why he could not pay. But then as the person walked down the aisle the driver called after him, “or you could just get a job!” How much humiliation do people have to experience for not being able to afford fares?

And what about our youth who follow the rules stating that students 12 and under are free? They use transit but are routinely questioned, thrown off buses for being taller or being curvier than average 12 year olds. How many racialized youth live in fear of being physically attacked by transit police who automatically assume fare evasion? The crackdown on fare evaders is perpetuating the structural racism at the heart of our society. The actual number of fare evaders are much smaller in number than the TTC would care to admit. But do even they deserve to be pounced upon by hefty guards and police? Do they deserve to be pepper-sprayed as if they were violent criminals?

Right now TTC transit riders feel the pain and get the blame. Instead, let’s fight to make the city and the province to fully fund public transit in order to eliminate this never-ending need for more expensive security and prosecution. Let’s not use our own taxpayer dollars to help fund a war against transit riders. Let’s not tunnel any deeper into this toxic mess.

We are in the midst of a climate emergency, so instead of a war on fare evaders we should be fighting to increase funding to expand and make public transit free for all. We can reduce our carbon footprint in a way that helps, not harms, workers, the poor and racialized people in the city.