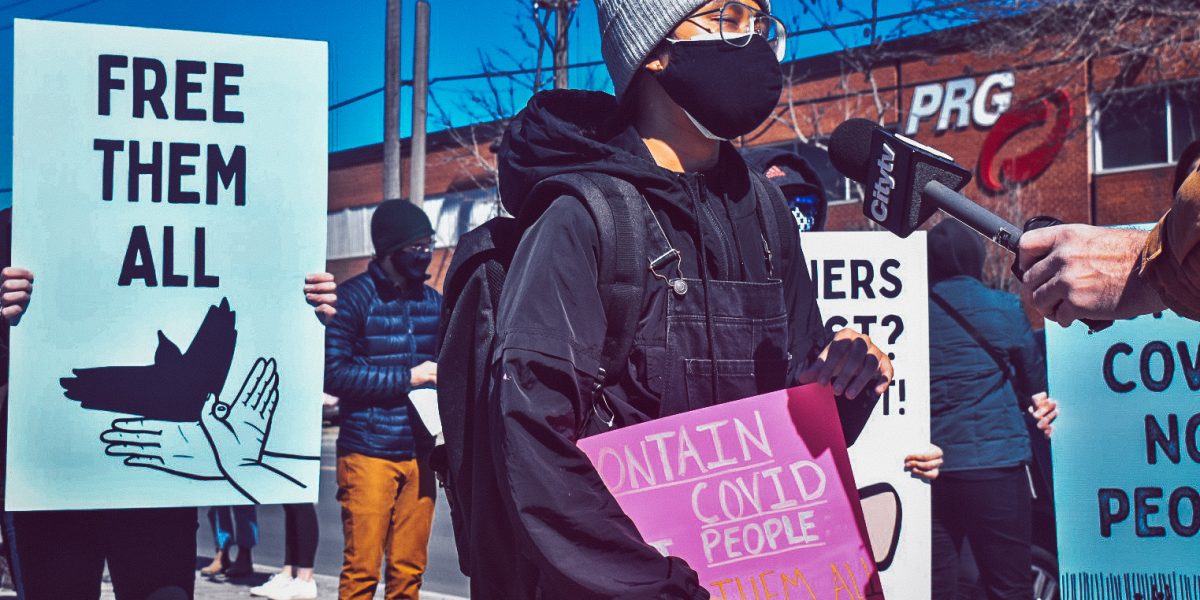 One year after the first prisoner tested positive for COVID-19 at Toronto South Detention Centre, the Abolition Coalition—a national partnership of prison advocacy organizations—organized rallies in major cities across the country to demand the release of prisoners. Former prisoners, front-line workers, and community members rallied together to demand that prisoners are vaccinated as a priority group and released from prisons safely into the community.

Bernard, a prisoner incarcerated at the Ottawa Carleton Detention Centre (OCDC), said, “we are not being rehabilitated at all. Prisons are oppressive environments.”

The Free Them All National Day of Action highlighted the injustices that imprisoned people have endured prior to and during the COVID-19 pandemic. Soeheil Benslimane, an organizer with the Criminalization and Punishment Education Project (CPEP) told Spring Magazine, “The combination of three factors – increased crowding, the continued spread of COVID-19 including variants of concern, and low levels of vaccination – are a threat to the health of prisoners, prison staff, as well as the broader community.”

At the outset of the pandemic, most Canadian jurisdictions reduced their prison populations in an effort to increase the space available to promote physical distancing and decrease the number of prisoners that could be exposed to COVID-19 should outbreaks occur. After an initial decrease in the prison population at the provincial-territorial level, by September 2020 the number of people held in most of Canada’s jails and prisons steadily increased.

“With a third wave of COVID-19 looming and transmission of new variants of concern accelerating, we demand that all levels of government release people from custody and make vaccines available for prisoners and prison staff at the earliest opportunity,” added Benslimane. “We demand that governments end segregation-like conditions and increase prisoner access to PPE, as well as cleaning and hygiene supplies, to limit the harms and COVID-19 transmission risks currently faced by incarcerated people.”

Despite higher rates of COVID-19 transmission during the second wave and the spread of new variants as we enter a third wave, the best available data shows that provincial jails and prisons in Nova Scotia, Ontario, and British Columbia are detaining more individuals than they were at the end of the first wave. In most jurisdictions, vaccination campaigns targeting prison settings have yet to begin.

Twin pandemics—drug overdoses and the virus

Communities across the country continue to endure a crisis in deaths tied to drug overdoses. Alannah Fricker, a member of Canadian Students for Sensible Drug Policy (CSSDP) at Ryerson University, told Spring Magazine that drug overdoses constituted the leading cause of death for former prisoners.

“Prisoners constituted one in ten overdose deaths over the last year. Prisoners deal with a lack of access to harm reduction programs inside prisons and are forced to use tainted drug supplies,” said Fricker. “Once released, prisoners suffer from a lack of community supports with many prisoners ending up homeless.”

“The war on drugs underscores the ongoing criminalization of people who use illicit substances throughout British Colombia—including people in and outside of prisons. We make the demand to free them all in recognition that police and prisons function in tandem—whether in the DTES or correctional institutions in the Fraser Valley, the surveillance and policing of people who use drugs must end. Over the last year we’ve seen the crisis of overdoses collide with COVID-19 and yield fatal results. We must abolish prisons and the war on drugs.”

A third wave and prisons

According to a report released on March 19 by the Prison Pandemic Partnership—a collaboration between the CPEP, the Centre for Access to Justice and Information (CAIJ), and the Canadian Civil Liberties Association (CCLA)—incarceration rates in Ontario, British Columbia and Nova Scotia have continued to rise since September.

Crowded settings are susceptible to large outbreaks of COVD-19. Infection control measures like physical distancing cannot be put in place without significantly reducing the number of people behind bars. Higher incarceration rates also increase the likelihood that prisons rely on torturous tactics like solitary confinement.

Dr. Justin Piché, Associate Professor of Criminology at the University of Ottawa and member of CPEP, notes: “It’s troubling that numerous jurisdictions have allowed their prisons to fill during the second wave. We must return to what worked better, as well as invest more in community supports for people being diverted from custody or decarcerated, if we want to limit the impact of COVID-19 and enhance public safety as we enter the homestretch of this pandemic.”

In the federal prison system, COVID-19 cases more than doubled during the second wave of the pandemic. As of 18 March 2021, there have been over 5,000 prisoners in Canada infected with COVID-19 among the more than 7,000 cases that are linked to Canada’s jails, prisons and penitentiaries

The majority of prisoners have not been offered a vaccine. Ontario, for example, is imprisoning significantly more people at a time when more infectious COVID-19 variants spread.

Rajean Hoilett of the Toronto Prisoners Rights Project told Spring Magazine, “We have been demanding decarceration during the pandemic for the last year. As prisoners and prisoners rights groups have predicted, the solicitor general’s negligence has led to widespread outbreaks and contributed to avoidable deaths.”

In Ontario, there have been at least 16 outbreaks at provincial jails and prisons since December. Two of these outbreaks – one at Toronto South Detention Centre in mid-March and the second at Maplehurst Correctional Complex in Milton, Ontario – have involved variants of concern. At the Toronto South Detention Centre site-wide testing at the jail confirmed that of the 70 cases linked to the outbreak as of March 16, just over half screened positive for variants of concern. As Hoilett said:

“As we enter the second year of the pandemic, many jurisdictions are still not providing basic information such as the number of prisoners and prison staff who have contracted COVID-19 in a timely manner. Although Ontario does release some data on COVID-19 spread in provincial jails and prisons amongst incarcerated people, the government has indicated that the more detailed information we have requested will incur several thousands of dollars in processing fees. Governments across the country should be proactively disclosing all records concerning the impact and management of COVID-19 behind prison walls.”

The organizations that participated in today’s Day of Action included: